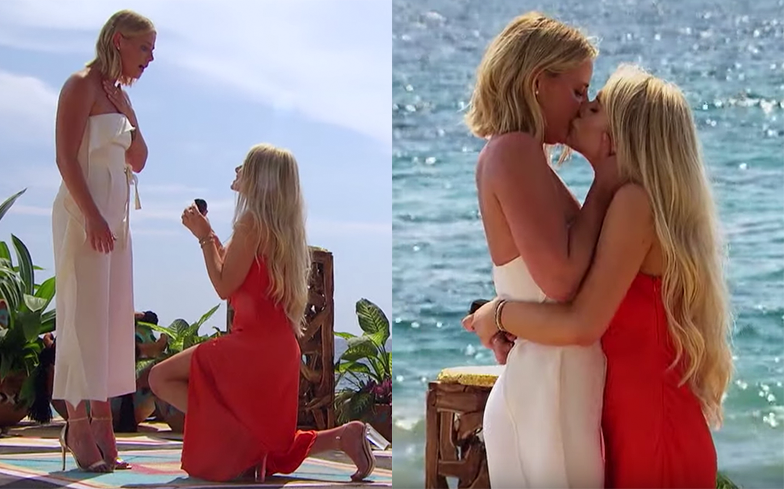 “I came here to find myself. But I found myself in you.”

The Bachelor franchise just made history with its first ever same-sex proposal.

On the season six finale of Bachelor in Paradise (a spin-off of The Bachelor and The Bachelorette), Demi Burnett popped the question to Kristian Haggerty, making it the first time a same-sex couple has done so in the franchise’s 17-year run.

Earlier in the season, Burnett was dating fellow contestant Derek Peth, before revealing she had been dating a woman unaffiliated with the show prior to filming. Haggerty then entered and they resumed their relationship.

“There were a lot of things that came between us, mostly myself and my own struggles,” Burnett told Haggerty as she proposed. “Like you said, I came here to find myself. But I found myself in you. I love you so much and I’m so in love with you.”

GLAAD praised the show after the episode aired. In an email to NBC News, Anthony Ramos – head of talent – said Demi’s coming out story and journey to “accepting her queer identity” is a groundbreaking moment for the series.

He wrote: “This move to include a same-sex relationship in an honest fashion has the power to upend preconceived notions of LGBTQ people like Demi who are attracted to more than one gender.”

Watch the adorable scene below.