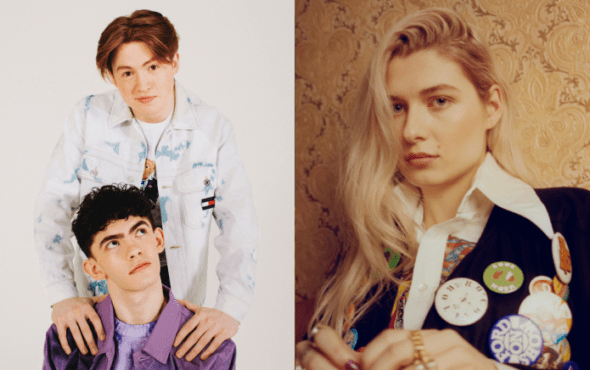 Singer-songwriter Baby Queen brought the cast of Heartstopper onstage during her performance of Colours of You.

Now, you know we’re big fans of the cast of  Heartstopper. In fact, the gang are the latest faces to grace our latest GAY TIMES digital issue.

Rising stars Joe Locke, Kit Connor, Corinna Brown and Kizzy Edgell are the young stars appearing in Netflix’s romantic coming-of-age series Heartstopper, which is based on Alice Oseman’s webcomic and graphic novel of the same name.

As the show navigates the highs and lows of confronting your sexuality as a teen, it also features an incredible soundtrack from standout LGBTQ+ artists, including Baby Queen.

The South African artist, aka Bella Latham, penned the song Colours of You for the Netflix series.

On 27 April, the 24-year-old artist surprised her fans by bringing the cast of Heartstopper on stage at the Electric Ballroom, London.

I’ve got some friends here tonight that are going to help me sing the last chorus. You might recognise them – you’ve seen ‘Heartstopper’ on Netflix, right?” she told the crowd.

The series, which has taken the internet by storm, is a light and joyous watch featuring little in the way of trauma and conflict, and that’s exactly what young queer people coming to terms with their sexuality or gender identity need to see.

Latham described the experience of contributing to the Heartstopper soundtrack as “unbelievable” and “completely surreal”.

“‘Colours Of You’ is a song I wrote about one of the lead character’s journeys through the discovery and acceptance of his own sexuality,” Latham explained.

“The song means a lot to me and is different to a lot of the music people have heard from me before, so I feel like I get to show a different side to myself as an artist and a writer.”

Latham opened up about her new Heartstopper single and more in her exclusive GAY TIMES Amplify cover story, which you can read here.

the cast last night on stage with baby queen

You can listen to Baby Queen’s new single Colours Of You, taken from the official soundtrack of Netflix’s Heartstopper, here or below.

You can read our full interview with the cast of Heartstopper and Alice Oseman from 15 April via the GAY TIMES app, Apple News+, Readly, and Flipster.