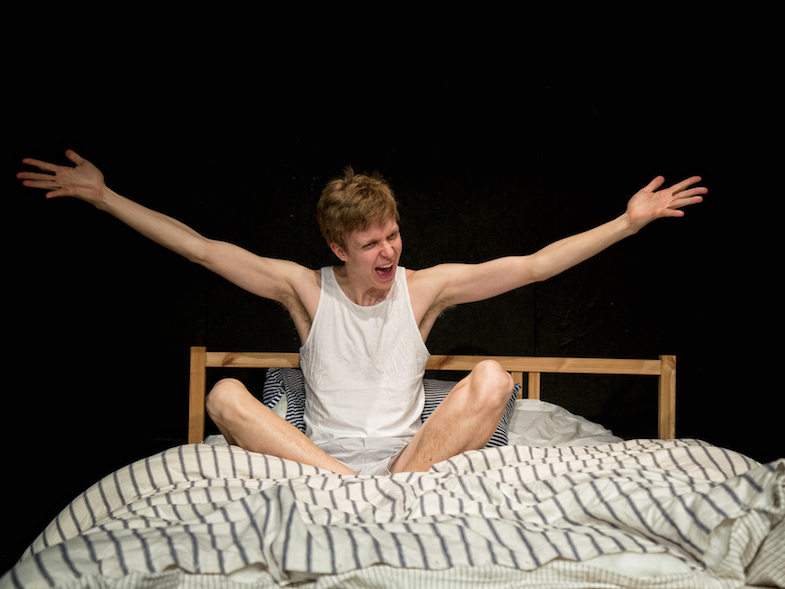 Following a successful stint at the Edinburgh Fringe, Rob Hayes’ one act, one man show has opened at Islington’s King’s Head Theatre, directed by Katharine Armitage.

Awkward Conversations is quite unlike anything we’ve seen before. It tells the story of Bobby (Linus Karp), a young man struggling with loneliness and looking for a genuine connection. Each scene starts the same – set in Bobby’s bedroom, we see him waking up after a one night stand, and the awkward conversations that follow. Except these aren’t any ordinary one night stands – the first scene involves a dog, the next a cat, later on a monkey and then a horse. It’s an unusual concept and frequently unsettling to watch, but for the most part entertaining.

Rather than having us turn away in disgust, the play succeeds in making the audience sympathise with Bobby. He seems extremely earnest and eager to please, and genuinely happy that his partner wants to stay the night and is in no rush to leave in the morning. He also makes some, if not entirely credible arguments, interesting and darkly comedic observations.

There’s an uncomfortable – but still amusing – moment where he ponders whether bestiality might in the future be more acceptable, in the same way that same-sex or inter-racial relations were previously taboo. His observation that killing or caging animals is perfectly legal, yet loving them is not, also elicits some nervous giggles from the crowd.

It’s a provocative show, with a handful of moments generating some strong audience reactions. There’s a particularly disgusting scene where Bobby has thought ahead and bought a sachet of cat food; upon observing his feline companion’s reluctance to eat it, he samples some himself. Grotesque and hilarious in equal measure, it elicits a cacophony of laughter and groans from the audience. There’s also an effectively tense moment where he thinks the police are on to him; through some clever use of sound we believe an officer is arriving at his door and we were on the edge of our seats to see what would happen next.

Awkward Conversations is a slight, quirky comedy. It’s an unusual, unsettling concept, with some challenging subject matter and is frequently difficult to watch – so in that respect it won’t be for everyone. We had fun with it, though, and for the most part it has an enjoyably dark sense of humour.