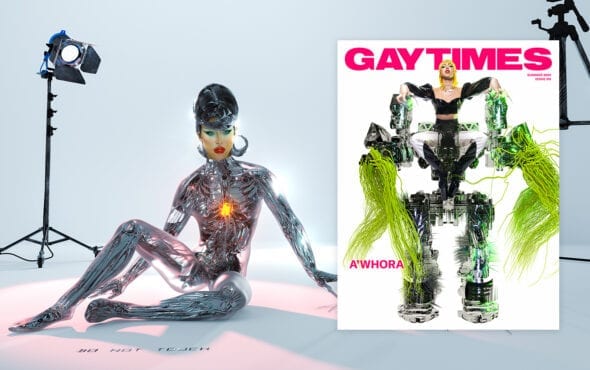 Although she didn’t take home the crown on RuPaul’s Drag Race UK season two, A’Whora bing bang bong’d the hearts of viewers across the world thanks to her jaw-dropping lewks and “caricature of a cartoon villain” attitude. Now, she’s planning to “fuck up” the fashion industry – one CGI wig at a time.

In her first ever magazine cover story for GAY TIMES, the Worksop-born entertainer doesn’t hold back as she discusses her time on the season, which is now widely considered to be one of the greatest instalments in the Emmy-winning franchise’s ever-expanding herstory.

When we ask the star about her so-called ‘villain edit’, she tells us: “Bitch, have you seen fucking Sleeping Beauty? She was lying dead in a bed.

“She wasn’t looking cute. She was playing with sewing needles and pricking herself and falling asleep. Maleficent, however, comes out with a sceptre and some bitch horns on her head and she’s turning looks, so I think that says it all, doesn’t it?

“If you want to look great, people will be intimidated, and with intimidation comes fear, and with fear it makes you a villain. If you’re scared of me then good, it means I’m doing my job correct.

A’Whora also expands on her conversation from Drag Race UK, in which she highlighted the lack of opportunities for drag artists in the fashion industry.

“It’s sad that it took me going on Drag Race to get the apology and acceptance that I wanted. But it was like, ‘If you want to be a serious fashion designer then you can’t be a drag queen because that’s just not a thing,'” she says.

“It’s like you’re working for these brands and sometimes they’re scared of the association of having someone who is known as a drag queen working for them in case it jeopardises the image of the brand.

“So people were like, ‘You have to choose. Do you want to be a well rounded drag queen, or a well rounded designer? Because you can’t have both.’ I’m glad I’ve now got this platform so I can be like, ‘Fuck ya, I don’t need any of you.’ I will be a drag queen designer, bitch, and you can suck my dick!”

During our conversation, A’Whora also opens up about the pre-conceived notions of fashion queens, how the traditional spaces within the fashion industry are finally embracing drag, and how she plans to “create a stir” in her post-Drag Race career.

You can buy the Summer Issue of GAY TIMES Magazine now, or read the issue in full on Apple News+.