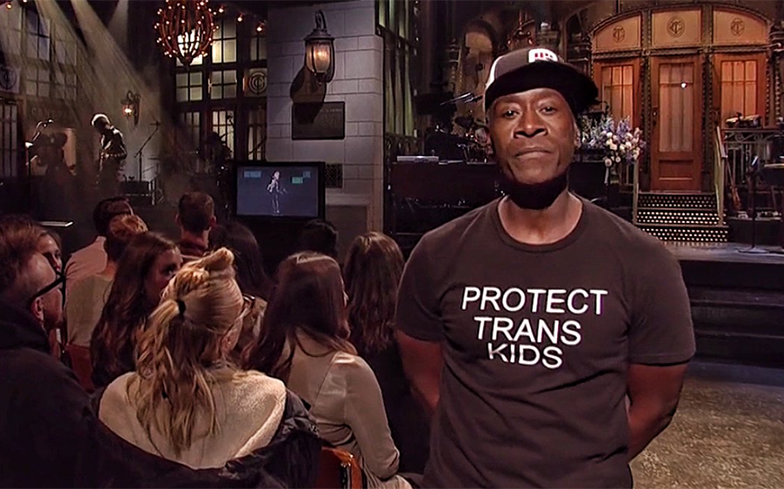 Don Cheadle has been praised on social media for his choice of t-shirt on SNL.

The American actor – who’s best known for his role as War Machine in the Marvel Cinematic Universe – used his time on Saturday Night Live over the weekend to advocate for the trans community, with a t-shirt that read “Protect Trans Kids”.

He then ended the show with a Russian hockey jersey with “CCCP” (Russian for USSR) across the front with Tr*mp’s name on the back.

Cheadle has been outspoken in the past when it comes to the American president, once calling him a “racist, misogynistic, draft dodging, ‘birther’ conspiracist, bankruptcy machine.”

Since his appearance on the show, he has been widely-praised on social media, especially from the LGBTQ community.

“Transphobic TERF culture needs to end,” said Munroe Bergdorf. “The well-being of trans children depends on it. Thank you Don Cheadle for stepping up on last night’s SNL and showing the world what allyship looks like.”

Piper Perabo, Sarah Silverman, Janet Mock, Leslie Jones and Karamo Brown were among the other celebrities who celebrated Cheadle on Twitter.

“I awoke to so much support and love!” he later wrote on social media. “Thank you SNL for the opportunity to play and pay respect and throw shade in an historic space in an historic time. keep fighting, y’all. evil grows in the dark.”

Check out the reactions below.

I have always been a fan of @DonCheadle but him wearing a protect trans youth T-shirt & Soviet Union hockey jersey w/ “Trump” & “45” on the back on @nbcsnl have now put me in the super fan category. Subtle, Masterful yet Effective. #Bravo pic.twitter.com/3R6qxZHXu8

I want a tee shirt of this picture ♥️@DonCheadle https://t.co/A4y6xKMaji

.@DonCheadle you are awesome.
Thank you for using your platform to speak out and be an ally to #ProtectTransKids. #SNL ♥️ pic.twitter.com/sdk89WcJBt