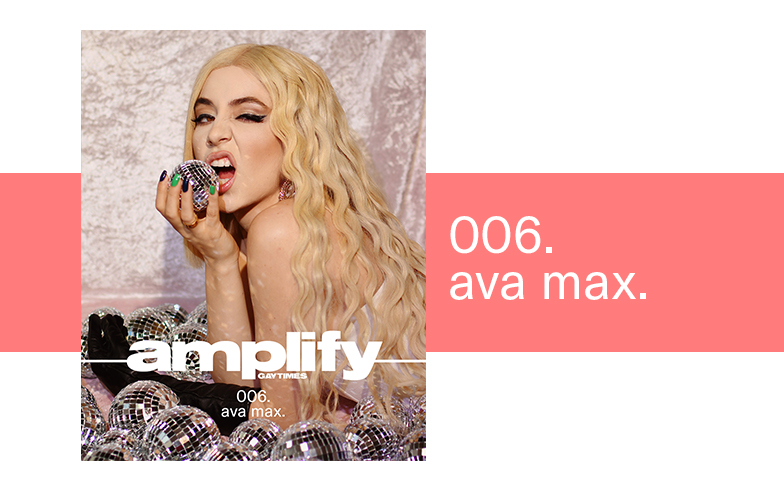 For pop purists out there, 2019 couldn’t have got off to a better start.

For pretty much the whole of January, Ava Max’s addictive anthem Sweet But Psycho ruled the No.1 spot on the UK’s Official Chart. Sure we’ve had Ariana Grande’s brand of R&B-leaning earworms and Calvin Harris’ house-infused chart bangers over the past year, but Ava’s breakthrough hit was unapologetically, unashamedly, and unwaveringly sugary pop down to its calorific core.

“It was really surreal at the time,” Ava tells us on set of her Gay Times shoot in central London. “When it stayed at No.1 for four weeks, I was freaking out. Especially when they gave me the award – it felt like I was living a dream.” It’s a dream Ava has been working away at for more than a decade. The story goes that at age 14, Ava had a chance encounter with Pharrell Williams at an airport. She told the super producer of her aspirations. His advice? “Work really hard, and you’ll get where you want to be.”

Sweet But Psycho may have seemed like it came out of nowhere as it climbed charts across the globe towards the end of 2018, but in reality it was the culmination of years of studio sessions and single releases before it. “I always joke that this was ten years of manifesting and working and wishing and just breathing it all in,” Ava says. “So when it happened it actually didn’t feel real because of that fact.” Having moved to Los Angeles aged 17 to pursue her dream of pop stardom, Ava had nearly resigned herself to the idea that her time to break through may have passed. “It took so long and I was a little jaded in the industry and was like, ‘Ehh, it’s probably not going to happen,’” she admits. “So when I put Sweet But Psycho out, I wasn’t expecting anything. When it blew up that’s when I was like, ‘Okay, this is actually real’ – especially when I heard it on the radio.”

Sweet But Psycho has so far topped charts in 15 countries, and is quickly making waves in the US. But in this age of instant releases and streaming algorithms, any pop star worth their salt knows that you can’t dine out on one hit for too long. As the old adage goes, strike while the iron is still hot. So while Sweet But Psycho is still riding high, Ava has served up its equally infectious follow-up So Am I.

With a bubbling beat, an airy chorus and lyrics like “it’s okay to be different, ‘cause baby, so am I,” it’s clearly going to resonate with the LGBTQ community. We’ve been known to be partial to a pop girl who owns that role with as much dedication as Ava has demonstrated, so it will come as little surprise that her gay following has soared following her chart success. With that in mind, have messages from her queer fans influenced this song and its lyrics? “Oh a hundred percent,” she smiles. “For me personally, everybody is unique and amazing. There’s nothing wrong with any sexual orientation. People who are always thinking about that stuff are not open-minded and this song is for them. It’s like, suck it. We’re all different, we’re all beautiful in our own way and we’re going to do it our way.”

But her admiration of the LGBTQ community runs deeper. “They inspire me to release a song like this and to open up myself, and be vulnerable for myself,” she explains. “I think in general the LGBTQ community is so inspiring. Also just people who are from different backgrounds. I love different cultures coming together. I always say that I want to do a music video where we see every single flag and we embrace everybody. That’s what we need right now.”

For Ava, her personal struggle with being considered an outsider came from moving around a lot during her childhood. “I’m originally Albanian and so when I had to move to South Carolina, I felt like an outcast,” she says. “I was always being bullied through school. That’s why I started homeschooling. I was expelled from my seventh grade class because I stood up to a bully. They then expelled me, so that wasn’t fun.” These days, however, she’s standing up to those bullies by empowering and inspiring today’s youth to be confident and proud of who they are.

“I actually filmed it in a school because of the bullying that goes on,” she says of the So Am I music video, which features a cast of diverse students. “It starts in school. That’s where a lot of people get hurt from it all. I wanted the storyline to focus on all the outcasts and all that diversity to show that we are all one in unity. It’s okay to be different. In general, I think society wants to put us in a format and I don’t think we should be fitting into it. We should do our own thing.” But the message extends beyond the school corridors. Considering the current divisive nature of politics and the poisonous rhetoric perpetuated by some of the world’s most powerful governments, it’s a timely reminder to simply look out for one another. “Everybody is so divided right now, and I hate it,” Ava says. “I wanted this to be the follow-up single because it has such a strong message. Especially at a time like this when we do feel divided. It’s not a good thing. We should all be open and love everybody – no matter where they come from or who they are.”

Our chat inevitably turns to social media. “I hate how everyone compares on social media,” Ava admits. “It’s very unhealthy.” When a pop star breaks through in 2019, not only do they get everything they’ve ever dreamed of, they are also handed the nightmare of increased criticism at the fingertips of keyboard warriors in the Instagram and YouTube comments. “In the beginning I didn’t like it,” says Ava. “Now I like it because it gives me a platform to give messages like this song. At first I was like, ‘I don’t want to post and share my personal stuff.’ But in a way, being vulnerable is being confident.”

Does she let herself read what people have to say about her and her music? “I come from a really crazily blunt family, and they’re always like, ‘Don’t eat bread, you’re going to get fat!’” Ava laughs. “They always joke around. They’re super blunt. So for me, when comments are like that sometimes I’m like, ‘Oh yeah, they’re right,’ and other times I’m like, ‘Okay, he’s an asshole – I don’t care.’ So it doesn’t bother me. But yeah, I do read them – I think that’s normal.” She pauses. “Of course sometimes things get you down – that’s a human thing.” One aspect of social media that Ava enjoys, however, is its ability to connect her with her pop peers – most notably a very specific demographic of pop girls. Ava Max has broken through at a time when some of the biggest female stars in the music biz are from Albanian heritage just like her. There’s Rita Ora, Bebe Rexha, Dua Lipa, and Era Istrefi all racking up those streaming numbers, winning awards, and essentially slaying the pop game. This is when social media becomes useful. “I’ve talked to Rita Ora through DMs,” Ava says. “She was so sweet and she congratulated me on Sweet But Psycho.” The others? “Bebe did as well. Dua, I haven’t talked to or met, but I would absolutely love to. Era started following me on Insta recently and she’s super sweet.”

But when it comes to Ava Max and comparisons with other pop stars, it’s another famous blonde who keeps getting mentioned. Many critics have likened Sweet But Psycho’s success, as well as Ava’s style and pure pop approach, reminiscent of Lady Gaga’s breakout moment over a decade ago. “She was one of the biggest – and still is one of the biggest – pop divas of our time,” Ava says. “She’s been around so long and she doesn’t disappoint ever. Gaga also thinks out of the box and that’s what the best artists do. No-one can do it like Gaga. So it’s a huge compliment to me. She’s Italian and I’m Albanian, so we’re like neighbours!”

The magnitude of the comparison isn’t lost on Ava, and she’s fully aware that she has far to go yet. But like Gaga before her, she is adamant that while her music needs to be fun and accessible she always wants it to have depth. “Meaning is number one,” she says. “The second thing is, if it doesn’t make me dance, I don’t want to put it out.” She laughs. “It’s important to have fun in the music! I didn’t want it to be depressing. I love singing ballads, but I also wanted everybody to have fun and dance.” That’s music to our ears. As for that debut album, albeit a few tweaks with the mastering and mixing, it is pretty much done. Ava spent the start of the year whittling down hundreds of songs into a 14-track collection ready for release this summer. Did Sweet But Psycho connecting with a mass audience provoke any last-minute changes in direction? “We’ve had the same plan for a while. We did make some new songs over the Christmas break, but in general I love dance-pop music with some soul and a dash of R&B,” Ava says. “I can’t escape that because I grew up singing along to a lot of R&B singers like Mariah Carey, Whitney Houston and Aretha Franklin. So you can kind of hear that in my voice, because that’s all I sang growing up. But the album will have different elements for sure. There’s no features on the album, I can tell you that.”

Otherwise, details about the album are being kept secret. She does tease one song in particular that the LGBTQ community will love, but we’re going to have to wait just a little while yet before we find out more. As the final mini disco ball is packed away on set, Ava has to head to her next showbiz event during her whirlwind trip to the UK. “Every ten years, pop makes a comeback,” she concludes, “and this is that time.”

Ava Max’s new single So Am I is available to download and stream now.