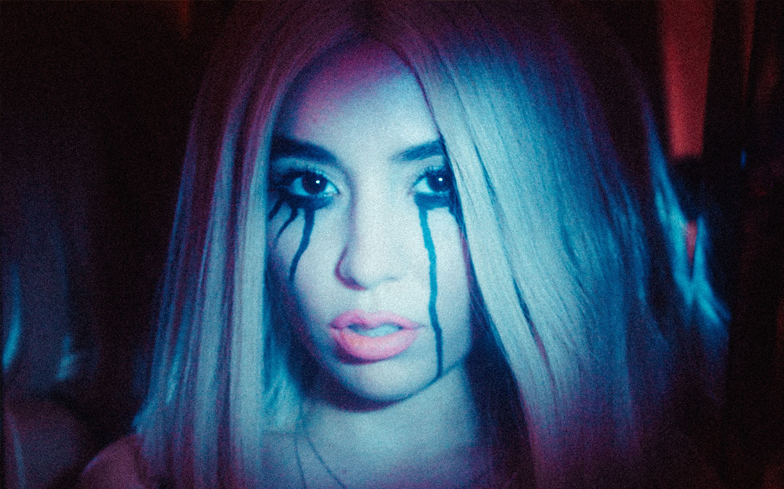 Here at Gay Times we’re always on the look out for the next pop girl who can serve epic melodies, fierce looks, and command a music video.

Those are the main reasons why we’ve been obsessed with Ava Max this summer, and her earworm bop Sweet But Psycho.

The singer-songwriter and her family had to flee war-torn Albania during her childhood, settling in France and then moving over to the United States. Ava then started out her career at young age where her aspiration of becoming a pop star took her to Los Angeles.

It was there that she bumped into hit-maker Cirkut (who has worked with the likes of Rihanna, Britney and The Weeknd), and they began crafting pop perfection together.

Gay Times caught up with Ava to talk about her brilliant single Sweet But Psycho, her feminist retort to Aqua’s 90s classic Barbie Girl, and why she think the LGBTQ community has the best music taste.

Let’s talk about your latest single Sweet But Psycho. What’s the story behind the song?
The story is about a girl who is pretty much misunderstood in a relationship. It’s basically about being in a relationship and you might be getting triggered and they might call you ‘psycho’ for being outspoken, but really you’re being strong and confident and standing your ground. ‘Psycho’ per se doesn’t mean psycho, it means being who you are and the guy loves you no matter what.

Have many fans reached out to you to say that they can relate to that?
Oh so many and that’s what I love most – when people relate to my music.

Considering there has been a lot of crossover genres in music in recent years, this comes through unapologetically pop. Was that the intention going into writing it?
It wasn’t like we wanted to make that completely like that, but it kind of just happened because that’s what I listened to growing up. It was my inspiration.

With that in mind, do you think we’re heading for another era of pure pop?
I definitely think so – and I’m happy about it!

So what’s it like working with a huge producer like Cirkut?
He took me under his wing about four years ago and he changed my life. That was a time when, honestly, I was thinking about quitting music. Every door was being shut in my face, and I had been doing this since I was eight years old. When I met him, it was kind of just the right timing. I didn’t know what I was going to do, so he got me in the studio and let me be creatively free. I got to write about what I want to write about. He actually gave me back my demos, unlike some people who I have worked with in the past. So he has definitely been my rock.

Obviously he’s worked with huge stars like Britney Spears, Rihanna and The Weeknd, so what did you learn from him while you were in the studio together?
He’s kind of like me – we’re both pretty much perfectionists. So we don’t leave the studio until it’s perfect. He taught me a lot about consistency for the message within a song. And that the whole album needs to be cohesive. So he’s taught me a lot.

Your remake of Aqua’s Barbie Girl – retitled Not Your Barbie Girl – is a genius feminist retort to the 90s track. Was that something you have wanted to say about the song from a young age?
Yeah, my mum is a really strong woman and she doesn’t take shit from anybody. So growing up I had a lot of strong females in my life, and also I have been mistreated by some guys too. Dating in Los Angeles was not fun, and there were a bunch of assholes who treated me like shit. So for me, when I think of that song the melodies are incredible, but I wanted to flip the script on the lyric. When I hear the song I’m like, ‘I am not anyone’s Barbie girl!’ It just came out of my mouth so easy, because that’s really how I felt.

What was the reaction when you first played it to someone?
Oh they were just like ‘Oh this is the coolest work ever – I’m so happy you worded it this way.’ I finished writing it with Madison Love, so it was really fun. A lot of people instantly gravitated towards it.

In this current political climate, female empowerment in music feels more vital than ever.
Oh yeah, a hundred per cent. If you listen to the songs of mine that are about to come out, I feel like they have a similar message. I do believe that girls need to hear that. I get messages all the time from people who are bullied, and say that my songs got them through the week. For me, that’s all I want to hear. I want to continue making music to uplift people.

Who are your biggest female inspirations?
Oh man! I grew up listening to Madonna, Whitney Houston and Mariah Carey. But also I look up to my mum. She’s really taught me everything I know.

I’m going to put you on the spot and ask you what your favourite Madonna song is.
Oh my God! There’s so many. Like A Prayer. Every time that comes on my body just shakes! Though I can’t just contain it to one. She’s just so incredible. She’s very unapologetic. She’s always open and free and that’s what I want everyone to feel. Have you noticed a lot of support from the LGBTQ community for your music?
Oh yes definitely! I feel like my music appeals to everyone. I want it to relate to everybody – I want it to be for everybody. That’s my main goal.

Have you played any Prides or gay clubs yet?
I haven’t! But that’s one of the main things I want to do soon. I was actually supposed to perform at G-A-Y in London, but I don’t know why that fell off the schedule. I was really stoked to do it, but I think it’ll happen soon in LA and also I’ll be back in London for sure.