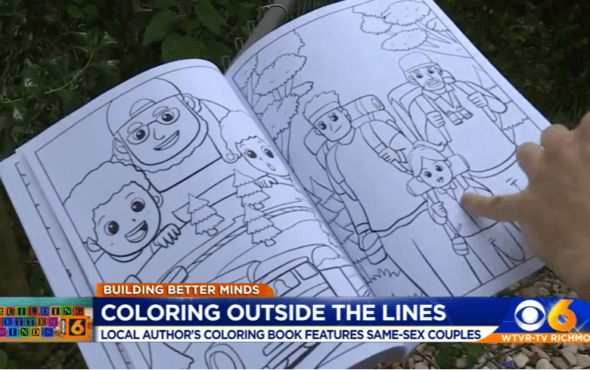 The book aims to teach children about LGBTQ+ families.

Mark, who lives in Richmond, Virginia, became a father after he and his husband adopted a child, however, they often struggled to find children’s books that reflected their family.

The book features pictures to colour of LGBTQ+ families just doing normal family activities, like celebrating the child’s birthday or going for a day out.

Speaking to WTVR, in a Building Better Minds report, he said: “One day I was looking for coloring books and I wanted something positive. Something that was about families. And there was nothing at all that had families like ours.”

He added: “The image of one mom, one dad, one son, one daughter, one cat, one dog is not at all the majority.”

Mark hopes that book will educate people, after his daughter came home from school one day saying that some of the other children had questions about their family. “I think of two kinds of families that would want a coloring book of LGBTQ families,” he explained.

The book has gotten praise from LGBTQ+ parents, with one, Chrissy Moseley, saying her child thought the book was “awesome”, adding: “The moment she picked it up she was excited because she saw that she was like, ‘Look mommy, there are two moms in here. There are two dads.'”

Chrissy’s wife, Brenda, added: “Parents need to make their kids aware that love is love in any form it wants to be.”