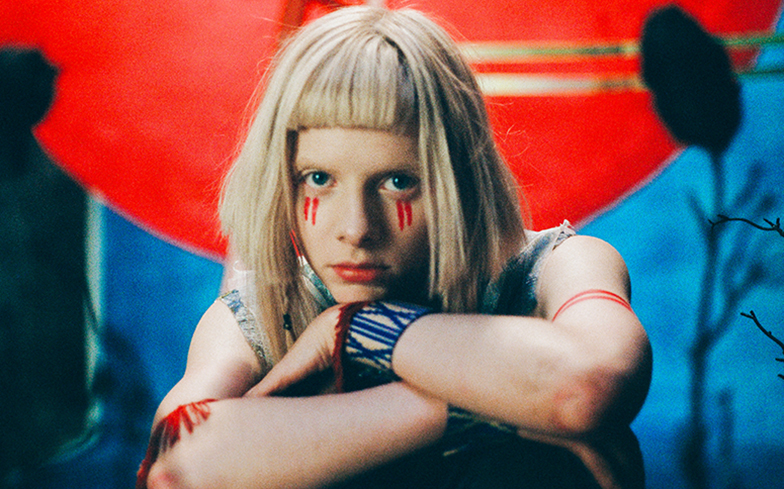 There really is no other artist quite like Aurora. When we meet the 22-year-old Norwegian on a rainy day in London, one of the first things she (quite gleefully) tells us is that she styles her own hair with a pizza cutter. It’s exactly the kind of quirky, DIY approach to life we’ve come to expect from Aurora, who simultaneously exudes a childlike sense of wonder and a wisdom well beyond her years.

Much like listening to her music, chatting to Aurora is a calming experience, but one that also provokes thought and stays with you long after the record’s stopped spinning. Right now, she’s preoccupied with the state of the environment, stressing that our generation is the one that has the power to destroy or save the earth, a message that penetrates the listener’s mind on A Different Kind Of Human, the cinematic second ‘step’ (or half) of her new album. While Step One was introspective, Step Two sees Aurora looking outwards, making noise and questioning how we can fix things before it’s too late.

“People are so afraid of being political, especially in pop music,” she muses, “and that’s why I want to make good, intellectual, emotional pop music that can reach out to people and speak about something important, and remind us of something other than all this stuff we don’t really care about.” She’s also passionate about Pride, being part of the LGBTQ community – although like many young people, she prefers not to put labels on herself – and encouraging love, which she says will “save us all” one day.

As her new record continues to win over fans and critics, we sat down with the euphoric-pop connoisseur to find out how being at one with nature shaped her unique outlook on life and music, why it’s “not even worth listening” to homophobes, and how her track Queendom is an anthem for all the queers of the world.

Congratulations on the album release. How are you feeling now it’s out in the world?
Well the day it was released, I actually cried a bit at midnight…

Happy crying though, right?
Yeah, happy crying. But also relief that you can truly let a little part of your life go, and then you have so much space the next morning, it’s ridiculous how big a difference it is for me. Step One was very sensitive, whereas Step Two is much more powerful, and so I wanted to split this album into two parts because of the very distinctive moods and perspectives. I had one emotional journey I wanted to bring people through, but it was very clear which songs belonged to which step. Step Two is me thinking, ‘What can I do for you? What can I do for everyone else?’ It’s about really acknowledging that we’re coexisting together with the people around us and with nature.

Nature is a big theme for this album, especially the damage that we’re doing to the planet. Is this something that worries you?
I think about it a lot, especially now that we know so much. We are inventing new, much more environmentally-friendly ways of doing things all the time, and we already have a good replacement for plastic water bottles. We have the tools, but people refuse to use them, which really frustrates me. We have no excuses anymore because we have the knowledge, the intelligence, the money, the power. We have everything except for the will, maybe, or the energy to do it.

I think some people find it hard to think that far into the future. If it’s not an immediate threat, they don’t care. But it will come eventually.
It will come, and maybe within our lifetime, because things are already happening, and we are really damaging the planet. I think in general, our natural way is to be empathic and to care, because I believe we are good. That’s what I have to believe. But to give extra meaning and extra perspective to your life, and to be a part of something bigger than yourself – that will change us. It makes us happy, I think, to be a part of something bigger than us, to realise we are part of a team. It’s this beautiful thing that happens when we fight for something that should be important to us all. We have a choice now: Will we be the generation that destroyed the world, or will we be the generation that saved it? That’s what I care about right now.

You clearly have a really strong connection with nature – why do you think that is?
Well, I didn’t like school, I always knew I was different, I didn’t know where I fit in – all of that shit. I found a lot of comfort in myself and I was my best friend, but people didn’t understand me and I felt like it was my fault – and for all the people out there who feel the same, the world is so much bigger than what you think, and one day you’ll go out and you’ll be able to give the world something special that hasn’t been given before, that’s why people like us are made. So I didn’t know where I belonged, but I knew when I was in nature. When I was there I felt like I was given time to be a philosopher, I discovered the power of my own mind, and I figured out my problems. I realised what I could change and what I couldn’t change, and it really made me a better and happier human. I’m very inspired by that, because what nature has given to me, I want to give to people who don’t have nature on their doorstep as I had. I think that’s the biggest inspiration I want my music to offer people, that sanctuary and the feeling of being safe and at home. Safety is such an important emotion that isn’t obvious to a lot of people.

Do you find it quite difficult to navigate things like social media and streaming, which are obviously so important for artists to embrace now?
Yeah, I do. I find it really overwhelming, actually. It’s hard to have access to everything all the time, because then everything loses some of its value, it just becomes noise, and it becomes hard to define what’s precious. I don’t really use lots of streaming services, because I don’t like having everything available. I like buying what I want and I listen to that again and again. I often take long periods off, which I think is healthy. There was a time in the beginning where my fans, or my supporters – the word fan is such a weird word, because we’re all just people who love music – they would make social media pages, and they would write things like, ‘Sorry I haven’t been active lately, I have so much to do’, and it just broke my heart. Why would you say sorry? Who cares? It’s lovely that you want to share things, and you have things to say, but don’t feel guilty. So I also try to spread that to myself and others, that it’s important to take time away. Even if you have art to share, it becomes better if you’ve been outside and gotten the input that will help you do something amazing. You need that time off. It’s really important.

You’ve spoken about having a girlfriend in the past. Do you identify as part of the LGBTQ community?
I haven’t really thought about it before, but yeah, I guess I have to say that I do. I knew that it was my right to love whoever I wanted to love, and I’m very passionate about that. I’m very sensitive to reading the news, I find it very difficult, and sometimes they try to fool us and make us think that the world is such a horrible, dangerous place because people like to read about awful things, but it’s not. The world is really good. Humankind is such a complicated and awful and beautiful creation, and it just blows my mind some times… and then I remember that we have love. Sometimes you fall into a hole, and you question everything that’s going on, but every time I remember we have love, and that’s going to save us all one day. Everyone who brings hate towards the LGBTQ community, they will die, but love will not die. So it’s almost not even worth listening to them. They try to pick a fight against love, which is quite ridiculous, because they will never win. As long as people have love in them, love will exist.

We’re moving towards a world where labels don’t matter as much anymore, and people can just be themselves. I feel like that ties in very well with you as an artist.
I think so too. But also I think if people want to define themselves because it strengthens their sense of community or belonging, that’s fine. There can be many reasons why people want to define themselves, or define something undefinable. If someone wants to define me or put me in a box, that’s fine, because you can have feet in all the boxes. But I don’t feel like I have to define anything about myself, and it’s so gorgeous the way we are moving towards that freedom. I think if you go back a long, long time ago in the ages of gods and monsters, we were even more open. We’ve been there before, where sex was sex, and love was love, and everything was just about feeling good, because that’s quite simple really. It’s very beautiful and it allows people to truly become fantastic, because people are given no roles, they are just free, and then truly amazing things can happen.

Your song Queendom is very much about female empowerment, but it also seems like a queer anthem…
Oh absolutely, that was the seed of the flower, it was the main inspiration behind it. I don’t think we can save the world before we know our value, and it’s hard to know your value when someone is trying to tell you that what you are is not right – that’s so destructive and so pointless! So it’s very important for me that people know their worth, and their potential. When people feel accepted they become so good. I’m really passionate about Pride, it’s very important to me, because it’s such an obvious battle. It’s very obvious for me to know that I’m on the right side of history, and it’s so easy to be passionate about it when I know that we are right.

You’re already working on your next album. Will that be Step Three, or something entirely different?
I will release a Step Three at some point, one day. I haven’t told anyone that before! I’m very excited. But for what I will do next, I’ve told you a lot about it already in track eight, A Different Kind Of Human. That tells you quite a lot about where I will be going, and I’ve hidden some hints here and there. I know the title, I have the order already, I know the concept – and I’ve already started. I actually started in January. I feel like I can’t rest, I can’t sleep. Sometimes I find it hard to fall asleep because I have ideas, and I get adrenaline from the thought of making new songs. I just want to make music, and I’m really making sure that I have the time now that I’m so hungry for it. One day, a time will come where I don’t want to make music, I’ll want to do something else, but for now I’m really grabbing the chance. It’s very fun.

Aurora’s new album A Different Kind Of Human is available to stream on Apple Music and Spotify now.