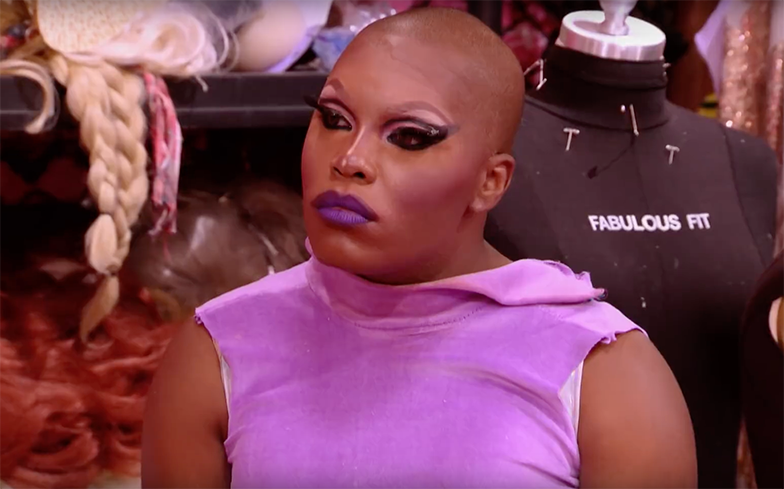 “If ya’ll just wanna compete, we can just compete, it’s no T. But it’s not going to work out well in your favour.”

The first ten minutes of Drag Race are always hella shady aren’t they? We’ve had a feisty encounter between The Vixen and Aquaria, Monique Heart venting her frustrations at the judging panel, and later waging all-out war with Mayhem Miller.

The drama continues in the sneak-peek for episode five, as the queens ru-turn to the werk room following their critiques.

Asia O’Hara – still shaken from her bottom three placement – blames the contestants for her negative feedback.

In the fourth episode, Asia assisted each queen with their sewing for The Last Ball on Earth, where they were required to create three looks based on climate change; Alaskan Winter Realness, Miami Summer Realness, and Martian Eleganza Extravaganza.

“I kinda feel used. It sucks because I put off doing stuff that I knew I needed to finish to do whatever needed to be done in the room,” she says. “Not a single person, not one time this entire challenge, ever came over to me at my station to say, ‘Hey, are you cool? Do you need anything?’ Not one person.

Related: Here’s when most of Drag Race will be taken off Netflix UK.

“Tisha Campbell… I looked up to her so much when I was a kid, and to stand up there in front of her, to have her look at me and have something negative to say while ya’ll get accolades from her, it breaks my heart.”

Miz Cracker stops Asia in her tracks: “Well, hold on, because when you give a gift you have to give it freely. I don’t want you to feel down about the people in this room. You have such a strong front, you never look like you need help. All of them [queens] would love to help you. Am I crazy?”

She adds: “I think there’s a giving atmosphere. What you presented to me doesn’t smell like reality, it smells like a whole different plate of food and I don’t want to eat it.”

Asia leaves us gooped and gagged in her confessional when she proclaims: “My mindset in the game has definitely changed, and it has taken me to a place I don’t necessarily like to go to. If ya’ll just wanna compete, we can just compete, it’s no T. But it’s not going to work out well in your favour.”

In this week’s episode of RuPaul’s Drag Race, the queens work in pairs and improvise in the new day-time talk show, Bossy Rossy.

Ru announces the guest-judges for this week – Emmy nominee Carrie Preston and Shania mother-tucking Twain – and the contestants are seriously gagged.

You can watch the next episode Thursday on VH1, and one day after on UK Netflix.