As You Like It an enjoyable and uplifting night out – review 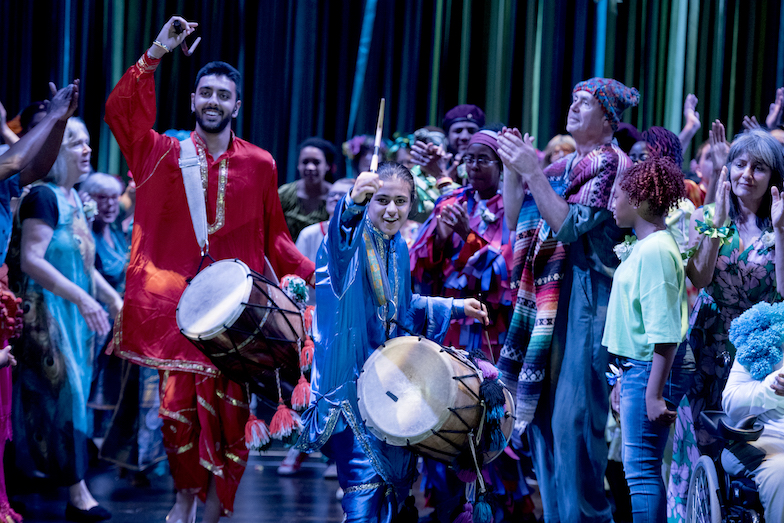 Following on from last summer’s Pericles at the National Theatre, the second Public Acts performance has opened at the Queen’s Theatre in Hornchurch, directed by Douglas Rintoul.

Inspired by Public Works – a groundbreaking programme by the Public Theater in New York – Public Acts is the National Theatre’s initiative to create ambitious, exciting acts of theatre and community. They made their debut with Pericles on the NT’s Olivier stage last summer and now they return with a new, modern adaptation of As You Like It at the Queen’s Theatre in Hornchurch. This production brings more than one hundred performers from community groups together with professional actors, in a charming show which turns out to be an enjoyable and uplifting night out at the theatre.

It’s quite a radical new musical adaptation, with music and lyrics by Shaina Taub, but all of the key elements remain intact. It follows the story of Rosalind, who is fleeing persecution; accompanied by her cousin Celia, they seek safety in the Forest of Arden. They disguise themselves as Ganymede and Aliena, encountering a host of interesting characters on their travels. It’s a stripped back and simplified rendition, weighing in at a little over 90 minutes, but the story is easy to follow with the use of mainly modernised language, surtitles, and a variety of interesting and entertaining songs.

We were really quite taken with the songs – from pop to rap to choral pieces, there was a pleasing mixture of genres, all of which were impressively realised. They managed to incorporate some of the text’s more famous lines, such as “all the world’s a stage”, while maintaining a contemporary feel. The musicians helped provide a sense of continuity throughout the evening, with recurring themes and brief musical interludes between scenes.

The whole production has a great community feel to it. With the Queen’s Theatre stage being substantially smaller than the Olivier’s, the company often completely fills it, sometimes spilling out into the front of the auditorium, creating a semi-immersive experience which lends the play even more of a community atmosphere. It’s really great to see such an inclusive, diverse cast – this performance truly brings together performers of all ages, backgrounds and abilities.

Bringing amateur and community groups together in this way does of course mean it’s not the slickest show we’ve seen – but we’ll happily forgive the occasional forgotten line or missed cue in exchange for seeing the pure, unbridled joy on the faces of these performers absolutely living their best lives. Public Acts is a truly wonderful initiative and we’d happily recommend a trip to the Queen’s Theatre to check out their latest production.