As You Like It a surreal take on Shakespeare comedy – review 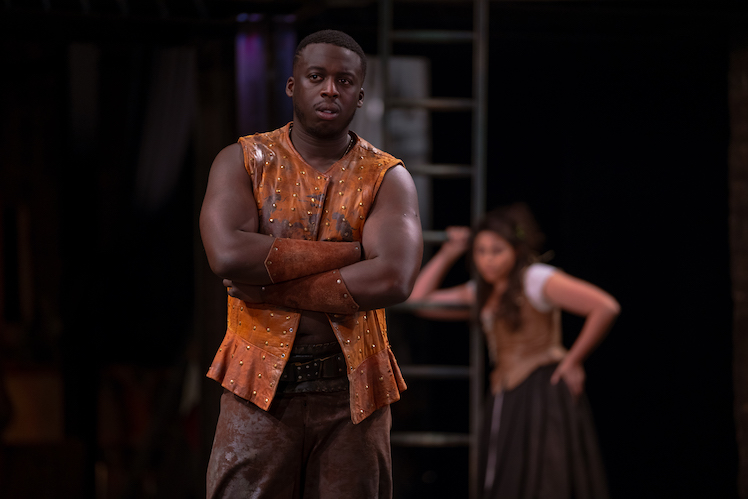 The Royal Shakespeare Company’s season at the Barbican continues with a quirky adaptation of the bard’s comedy, directed by Kimberley Sykes.

As You Like It tells the story of Rosalind, who has been banished from the Duke’s court and journeys into exile, accompanied by her faithful friend Celia. Before leaving, Rosalind catches the eye of the lovestruck Orlando, who is also banished from the court. Later on they encounter each other in the Forest of Arden; Rosalind is in disguise as a man, Ganymede, at the time, and so begins the pretence of her trying to woo him as if she were his fair Rosalind.

It’s a surreal take on Shakespeare’s comedy. It begins conventionally enough – the staging is minimal but it all otherwise seems traditional. Over the course of the first act it starts to get a bit weird, with characters bursting into song, regularly breaking down the fourth wall, and even venturing down into the auditorium. Act one culminates with audience members being encouraged onto the stage and a disco ball descending from the ceiling. It’s all a bit baffling if we’re honest, but anyone concerned that it might be a bit of an old-fashioned production can rest assured that is absolutely not the case.

This production plays around with some of the characters, too. Jacques (Sophie Stanton) is female in this staging, adding a different resonance to the famous “all the world’s a stage” speech. Audrey (Charlotte Arrowsmith), the love interest for fool Touchstone (Sandy Grierson) is played as deaf; it’s rare and really quite nice to see this level of inclusivity brought to proceedings. It also sets up some delightful comedy with her interpreter.

Not all of the changes make sense, however – while we’re all for a bit of fluidity, the gender swap from Silvius to Silvia as another love interest seems odd. We don’t understand why Phoebe would reject Ganymede on the grounds that she is Rosalind in disguise – i.e. she is woman – and then embrace Silvia, who in this production is female. We had some reservations about the overall length of the show, too – it was about three hours, which is lengthy for a lighthearted comedy, and it felt like it could have been pacier.

There’s much to enjoy in As You Like It. For the most part it’s an entertaining comedy and while some of the changes didn’t quite make sense, there were still plenty of surreal, quirky touches which worked well. It’s not without its faults but it still provides a pleasant evening out at the theatre.