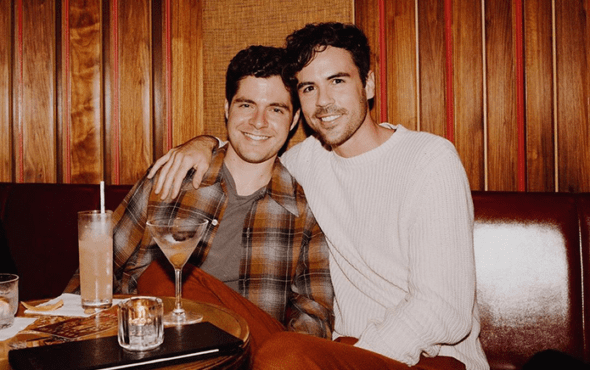 Ben Lewis has been cast in an upcoming LGBTQ+ Christmas film.

The Canadian actor will star alongside his real-life husband Blake Lee in The Christmas Setup, which will make history as the first holiday-themed film with a lead LGBTQ+ storyline on Lifetime.

Lewis, who is best known for his role as William Clayton in the final two seasons of Arrow, will play Hugo, an NYC-based lawyer who returns home to Milwaukee to spend Christmas with his best friend Madelyn (Ellen Wong) and his mum Kate (Fran Drescher).

Unbeknownst to him, Madelyn has arranged for Hugo to run into Patrick – played by Lee – his high school friend and former crush, who has returned from a successful stint in Silicon Valley.

The official synopsis from Lifetime reads: “As they enjoy the local holiday festivities together, Hugo and Patrick’s attraction to each other is undeniable and it looks as though Kate’s Santa-style matchmaking is a success. But as Hugo receives word of a big promotion requiring a move to London, he must decide what is most important to him.”

In a statement posted to Instagram, Lewis praised the cast of The Christmas Setup and said the film is “the most surreal, wonderful early-Xmas gift” he could ask for.

“There’s good-weird and bad-weird,” he wrote. “2020 has been bad-weird (please, for the love of God, #VOTE) but starring alongside my husband Blake Lee (not to mention my old friends Ellen Wong, Chad Connell, and the ICON Fran Drescher) in Lifetime’s first gay Christmas movie (directed by Pat Mills) definitely qualifies as good-weird. In fact, it’s the most surreal, wonderful early-Xmas gift I could ask for.”

The Christmas Setup is written by Michael J. Murray and produced by Neshama Entertainment in association with MarVista Entertainment and Wishing Floor Films.

The film, as well as the Asian American-led A Sugar & Spice Holiday, are part of Lifetime’s new objective to better represent LGBTQ+ people and people of colour.