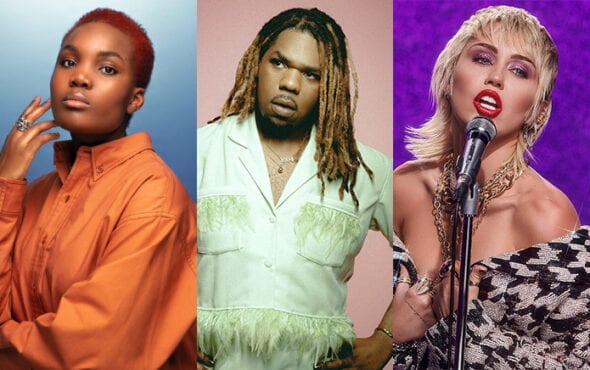 The full list of nominations for the 2021 BRIT Awards has been announced.

The nominated artists include Arlo Parks and Celeste for their debut collections, Collapsed in Sunbeams and Not Your Muse, Dua Lipa for her Grammy-winning sophomore album Future Nostalgia, and Jessie Ware for her praised fourth album What’s Your Pleasure?

J Hus is the only male artist nominated for his second album Big Conspiracy, which became his first chart-topper in the UK.

“Women have always made great music and wonderful albums, but this is the first time in the entire Brits history that we have dominated the best album category,” Ware said in a statement.

“The time is now – albeit long overdue – to start respecting and appreciating the vital role women, and their music, play in the British music industry.”

“To be nominated for three Brit awards at 20 years old as an independent artist is something that exceeds my wildest dreams. I genuinely don’t have the words to describe how grateful I am,” said Arlo.

“This year has been difficult to say the least but art has been holding us together in some way, and I’m excited to be part of this celebration of British music.”

MNEK has also been honoured with a nomination for Single of the Year for his collaboration with Joel Corry, Head & Heart, which topped the UK Singles Chart for six consecutive weeks and sold over one million copies. Rina Sawayama received a nod in the Rising Star category – she said she “literally fell to the floor” when she found out – although the winner was announced in advance, with Black Hole singer Griff taking the title.

Last year, Rina ignited a conversation about Britishness within the awards circuit after being told she was “not British enough” to be nominated, which resulted in both the BRIT Awards and the Mercury Prize updating their guidelines.

The new rules state that artists will be eligible for both awards if they meet one of three criteria: being born in the UK, holding a British passport or having been a permanent resident for more than five years.

As well as gender parity, this year’s voting body achieved 26% Black, Asian and minority ethnic representation, which is reflected in the nominations as more than half of the nominees for British Album, British Female Solo Artist, British Male Solo Artist, Breakthrough Artist and Single of the Year and non-white. One of the most notable admissions, however, is Sam Smith, who previously championed for the BRIT Awards to scrap gendered categories.

The singer, who identifies as non-binary and goes by them/them pronouns, released their third studio album Love Goes in October 2020.

While organisers of the BRITs considered scrapping male and female-specific awards, a representative said “the process of change isn’t something that can be fixed in one campaign.”

But, they did go on to say: “Looking to the future we still have a lot of work to do in the coming years to evolve the Brits. We are committed to working together with the industry to evolve the show to be as inclusive and relevant as possible.”

You can view the full list of nominations for the 2021 BRIT Awards below.