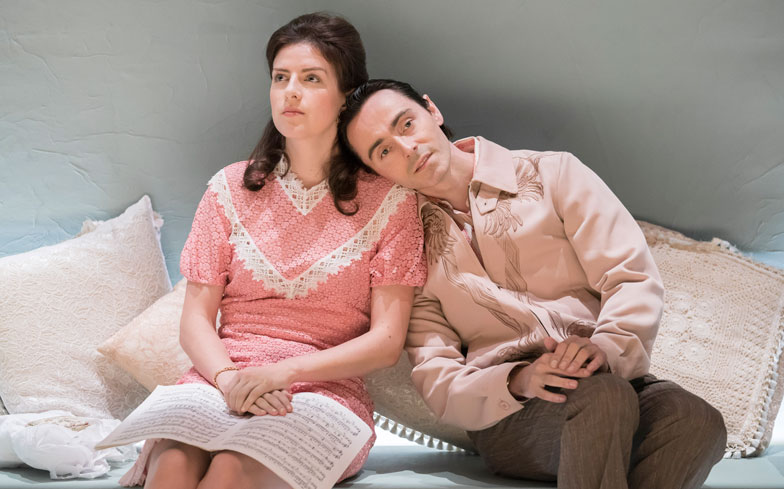 Lyndsey Turner’s revival of Brian Friel’s play has opened at the Donmar Warehouse.

Aristocrats tells the story of Ballybeg Hall, an Anglo-Irish big house, and its inhabitants, the O’Donnells. Checkhovian in style, it examines this once-noble family and their subsequent decline. Set on the eve of the wedding of the youngest sibling, Claire, it sees the adult children of Judge O’Donnell return to the ancestral home in time for the celebrations. Only the occasion is not set to be a happy one; each of the siblings is damaged in some way; the money has run out; the family home is crumbling; and Judge O’Donnell, bed-bound following a stroke, is still exerting his tyrannical control over his children through a baby monitor.

It’s an unusual production. The staging at first seems quite odd – the set is an abstract blue box containing only a doll’s house full of miniatures, depicting Ballybeg Hall. This is used to humorous effect, however, and gradually more props are added to create increasingly believable spaces. Impressively, the decaying wall at the back eventually peels away to reveal a painting of Ballybeg Hall and its surroundings, giving more context and a real sense of the former grandeur of the residence.

The acting is strong throughout. Each of the O’Donnell siblings has his or her own issues and they’re depicted believably. David Dawson, as the eccentric Casimir, is particularly impressive. Having built a – presumably fictitious – happy life for himself in Hamburg, complete with a wife, children and abundant friends, he appears perpetually anxious at the prospect of being found out, restlessly pacing the stage and dodging questions. Eileen Walsh, as the more measured Judith, is another standout performance – the only voice of reason in the family, she delivers the most impassioned speech of the play, detailing the ongoing struggle of keeping the family running in the face of dwindling resources.

We did have a couple of minor issues with this production, however. Given how natural some of the performances felt, the use of a narrator to read out the stage directions at the start of each act seemed to jar with the more realistic acting. We also felt that – given how sensitively some of the actors delivered their parts – the device of having an American historian present to highlight some of the family’s oddities and inconsistencies was handled somewhat clumsily throughout.

Overall, though, these quibbles don’t detract from what is an otherwise impressive production. Aristocrats features some impressive acting and tells an intriguing tale. It’s a play we’re happy to recommend.