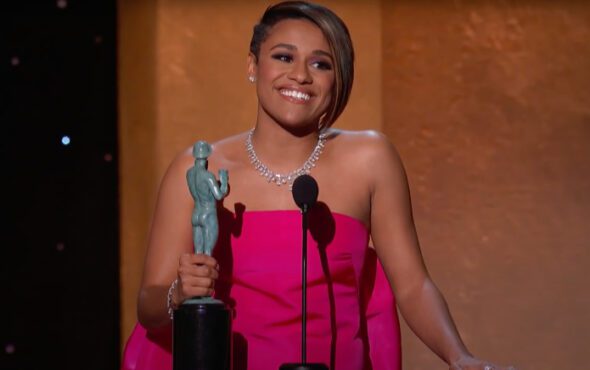 West Side Story star Ariana DeBose made LGBTQ+ history as the first queer woman of colour to win a SAG individual film award.

On 27 February, the 31-year-old won the title of Outstanding Supporting Actress in a Motion Picture.

Upon receiving her award, The Prom star took to the stage and gave an emotional speech.

“Thank you. My heart is beating in my chest right now. It’s taken a long time for me to feel comfortable calling myself an actor,” she said.

“My roots come from the dance world and the Broadway stage, and the Anita we see on screen took every bit of me but she took 10 years to make and I’m extremely proud of her and our film.

“And I really do believe that when you recognise one of us, you recognise all of us so thank you SAG-AFTRA for this recognition.”

Before heading off the stage, she thanked an array of people, including Steven Spielberg, the crew and her fellow castmates. She even praised the Mother Monster herself, Lady Gaga.

“And just thank all of you, all of you staring at me, so many of you, dear God. Hi Lady Gaga, you’re amazing,” she exclaimed.

“I have watched so many of you for a very long time. You have inspired me and continue to do so and I am just thrilled to be among you, so thank you.”

When asked about her history-making win backstage, DeBose said the incredible moment was “indicative that the doors are opening.”

“It’s indicative to me that I will not be the last and that’s the important part. Whatever firsts are attached to my name, they are immensely special to me but I’m focused on the fact that if I’m the first of anything that means I won’t be the last.”

Aside from her groundbreaking SAG victory, DeBose is gearing up for a busy award season.

DeBose has also broken another barrier as the first Afro-Latina and openly queer woman of colour to be nominated in an acting category at the Academy Awards.

She’ll be going up against Aunjanue Ellis, Kristen Dunst, Judi Dench, and Jessie Buckley at this year’s ceremony for Best Supporting Actress.