Anything Goes is the perfect tonic for a troubled time – review 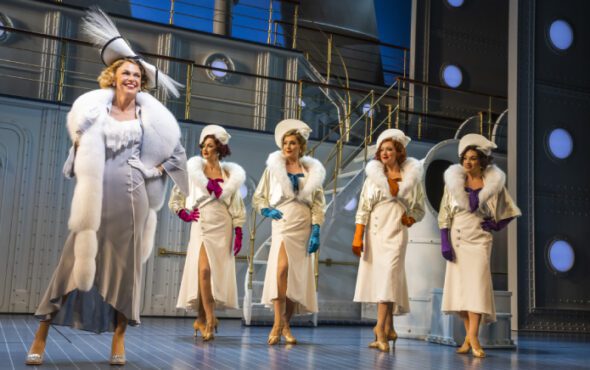 This London revival, based on the multiple Tony Award-winning 2011 Broadway production, has opened at the Barbican Theatre, directed by Kathleen Marshall.

If ever we were in need of a night of escapism, 18 months into a global pandemic seems as good a time as any. Cole Porter’s classic musical Anything Goes, which originally opened on Broadway in 1934, was seen as an entertaining diversion from a time when the USA was still reeling from the Great Depression. Fast forward nearly 90 years and it serves much the same function today – it’s the perfect tonic for these troubled times we find ourselves in. For one evening, this beautifully-delivered musical makes it feel like everything is going to be ok again.

Shows of this quality rarely open in London and when they do it’s a real event. The cast is superb – alongside Broadway royalty Sutton Foster, reprising the role of Reno Sweeney which won her a Tony for best actress in a musical, we’re also treated to delightful performances from star names including Robert Lindsay, Felicity Kendal and Gary Wilmot. It’s a huge company, with over 50 performers including the musicians – we haven’t seen a show of this scale in London in a fair while – and no-one misses a beat throughout.

It’s just a sheer delight from start to finish. The running time weighs in at comfortably over two and a half hours, yet it passes in the blink of an eye – time really does fly when you’re having this much fun. Act one had us grinning from ear to ear – opening number I Get A Kick Out of You is such a classy way to start proceedings, while the utterly perfect tap routine which accompanies act one closer Anything Goes managed to elicit a standing ovation (and this wasn’t the only mid-show standing ovation for the performance we saw). It’s a show which keeps getting better, too – the second act easily has as many highlights as the first.

We could go on and on about Anything Goes, but we’re mindful of sharing too many spoilers, and it would take far too long to list its many achievements. Suffice to say it’s incredible – Sutton Foster oozes an effortless star quality which feels completely natural throughout, and she’s supported by a brilliant cast and wonderful musicians. The show is full of great songs and show-stopping dance routines, the plot is delightfully silly and while the humour is pretty old-fashioned, all the punchlines are delivered with impeccable timing. We really can’t find fault with the show at all – this production is flawless.