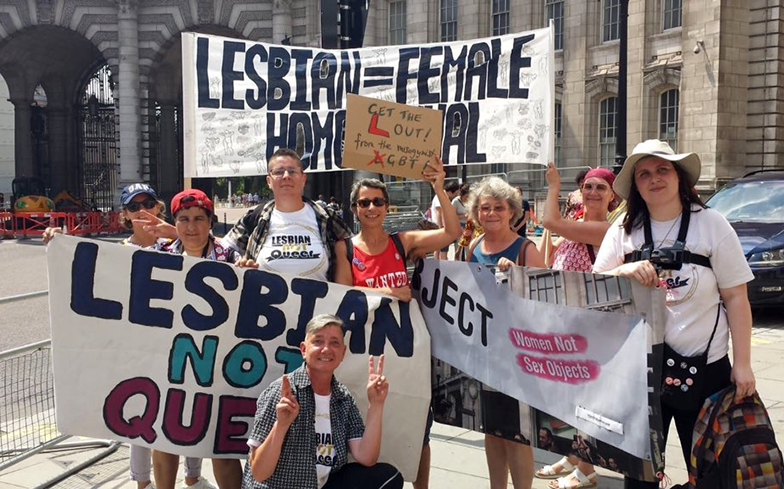 “We protested to protect our rights and on behalf of all the lesbians intimidated, threatened and silenced by the GBT community everywhere.”

A group of anti-trans lesbian protestors – consisting of trans exclusionary radical feminists (TERFs) – invaded this weekend’s London Pride celebrations (7 July), and were then allowed to lead the parade by officials.

Eight women – organised under the Twitter hashtag #GetTheLOut – blocked the start of the parade route by laying down in the middle of the road, with banners that read: “Transactivism erases lesbians” and “Lesbian = female homosexual”.

They also handed out flyers which state the trans movement is “coercing lesbians to have sex with men”.

One of the activists reportedly shouted: “A man who says he’s a lesbian is a rapist”.

LGBTQ activists have condemned organisers for allowing the transphobic protestors to lead the march uninterrupted.

Pride in London responded to the backlash, and said the group were allowed to participate due to the day’s high temperatures.

A spokesperson said: “Every year, Pride is attended by hundreds of thousands of people who demonstrate that Pride still matters.

“Given the hot weather and in the interest of the safety for everyone attending today’s event, the parade group was allowed to move ahead. “We do not condone their approach and message and hope the actions of a very small number people does not overshadow the messages of the 30,000 people marching today.”

A spokesperson for Get The L Out said: “We protested to protect our rights and on behalf of all the lesbians intimidated, threatened and silenced by the GBT community everywhere.

“The GBT community today, by supporting the rights of males who “identify as lesbians” (also called “transwomen”) over the rights of lesbians to choose their sexual partners (on the basis of their sex, not how they “identify”) is in fact enforcing heterosexuality on lesbians.

“This is a misogynistic and anti-lesbian manifestation of the rape culture we live in.”

Patricia Curtis from TransPals slammed the protestors: “It’s disappointing that anti-trans activists decided to hijack the front of a parade, an insult to all the hardworking staff in the NHS whose place they stole.

“But their vile stunt failed. London is a place that doesn’t tolerate hate.”