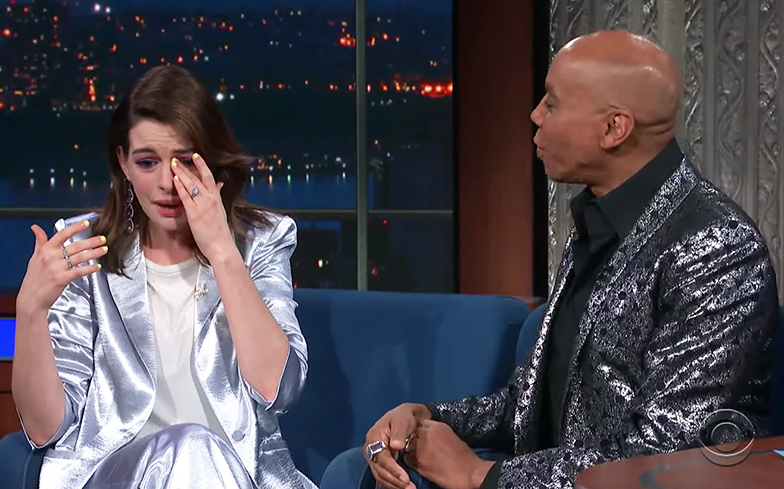 During an appearance on The Late Show with Stephen Colbert, the Oscar-winning actress and star of The Hustle was asked by host Stephen what TV shows she enjoys watching as “comfort food” to make herself feel better.

After naming Game of Thrones and Killing Eve, which aren’t exactly cheerful, she added: “You know what, there is a show that I do watch to make me feel better: Drag Race. Oh my god, I love that show so much!”

“Have you met RuPaul?” Stephen asked. “He’s my guest tomorrow night, would you like me to send a message to him? Is there anything you’d like to say to him?”

Replying that she wouldn’t know what to say except that she “loves” him, Stephen teased, “Well why don’t you just say it to him right now,” before bringing the drag superstar out onto the stage to join them.

The two icons embraced and shared compliments – and a few tears – before Anne revealed her favourite moment from Drag Race herstory.

“Monet X Change’s entire journey, and how amazing she was in season 10 – I really take this very seriously – and the growth between season 10 and season 11 and the way she stepped her pussy up,” she gushed.

“Because I feel like since I started being an actress, I’ve learned how to step my pussy up, and I’m just thrilled for her, and me, and you. Thank you.”

Watch Anne and RuPaul meet in the clip below.