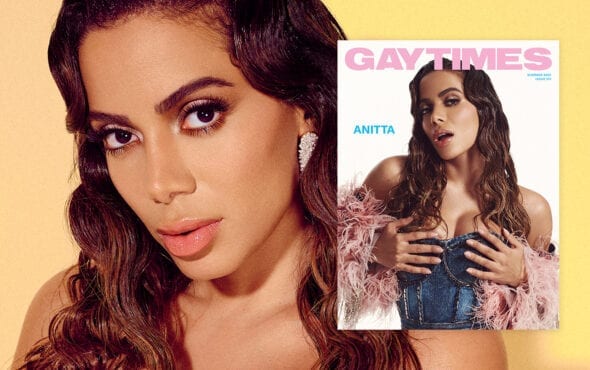 A proud Brazilian, a proud member of the LGBTQ+ community, and ready for world domination.

Anitta’s long-awaited fifth studio album, Girl From Rio, is nearly upon us so we caught up with the superstar to get the low-down on the new music for GAY TIMES Magazine’s Summer Issue – which is out now.

As well as speaking to the Rio-born singer about what we can expect on her new album, the cover story also delves into Anitta’s experiences of bi-erasure and why she thinks LGBTQ+ visibility is paramount.

“When it comes to bisexuality, it’s kind of tricky because first of all, I’ve never dated a woman,” Anitta tells us. “I’ve had relationships with girls, but it was very casual. We never dated and it wasn’t a long-term situation.

“So people will sometimes say, ‘Oh so you’re not really bisexual – you only date guys.’ I don’t think that it means that I’m not. Imagine if I said I’m heterosexual and then someone catches me kissing a girl or hooking up with a girl, they’d go ‘oh my god, you’re such a liar!’

“So I just think we should be honest and people – even from within the community – should not judge or expect each person to act the way they want them to. It’s a very delicate subject and we should just respect each other’s way of finding themselves. We should be free to do whatever we want to do.”

Anitta considers herself a proud member of the LGBTQ+ community and continues to support and speak up on LGBTQ+ issues – especially in her native country of Brazil.

“We are born and surrounded by so many people that want to tell us what is right and what is wrong,” she tells us.

“When we see other people showing up and saying ‘Yes, that’s who I am’, it helps these people who still need a bit of courage. It’s good – they feel like they’re being represented and they have more people with them. I think it’s very important.”

Anitta’s new album Girl From Rio will be released later this summer.

You can buy the Summer Issue of GAY TIMES Magazine now, or read the issue in full on Apple News+.