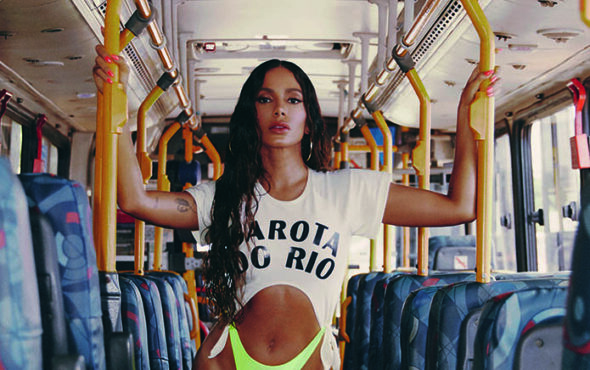 What we wouldn’t give to be whisked away for a sun-bathing session at the world-famous beach in Copacabana right now.

Luckily for us, until it’s safe once again to pack our suitcases and jet away to warmer climates, we have the idyllic tones of Anitta bringing the sunny shores of Rio de Janeiro to us instead.

Anitta is a household name in her native country of Brazil, topping the charts and becoming one of their most successful superstars. With collaborations with the likes of Cardi B, Maluma, Madonna, and Major Lazer under her belt, she’s become a force to be reckoned with on the international stage in recent years, recording songs in Spanish and English alongside her mother tongue Portuguese.

Her new single Girl From Rio is her first song fully sung in English as she finally launches her bid for recognition on these shores too – and what a summer-filled anthem to get us Brits warmed up to.

Produced by renowned hit-makers Stargate and co-written by our very own Raye, Girl From Rio mixes the old with the new for spectacular results. A sample of popular 1960s Brazilian jazz song The Girl From Ipanema (Rio’s other famous neighbourhood and beach) serves as the earworm hook here, as fresh beats and Anitta’s sultry vocal delivery bring it into the 21st Century.

Much how Rihanna took us to Barbados with her iconic hit Pon de Replay, this subtle bop cleverly infuses Brazilian culture with slick pop production to appeal to an international audience. While Anitta is aiming for global appeal, here it doesn’t come at a compromise to her Brazilian heritage.

“Hot girls where I’m from, we don’t look like models / Tan lines, big curves and the energy glows you’d be falling in love with the girl from Rio,” she sings on the infectious chorus, which makes an early bid for song of the summer. As a proud member of the LGBTQ+ community, Anitta knows her way around a pop anthem full of love and warmth, and Girl From Rio is the perfect showcase of her superstardom to English-speaking audiences who have yet to discover her.

Girl From Rio is lifted from her forthcoming fifth studio album of the same name, which has been executive produced by Ryan Tedder and has plenty more surprises in store. If this is a sign of what’s to come, Anitta’s well on her way to global adoration.

Anitta’s new single Girl From Rio is available to stream and download from 30 April.