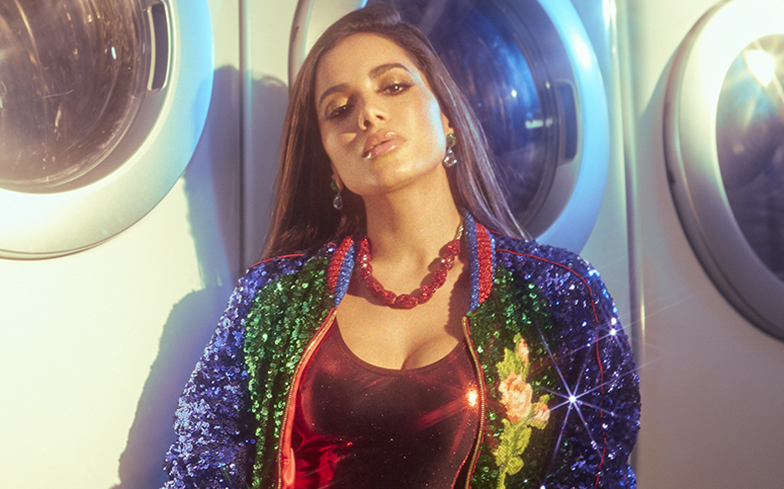 Brazil’s biggest pop star is about to make her UK debut at London’s Royal Albert Hall.

After dominating the charts in her home country, singer-songwriter Anitta began releasing songs in both Spanish (Paradinha) and English (Is That For Me), and collaborating with some of music’s hottest stars like Diplo, Iggy Azalea, Alesso and J Balvin.

Now, she’s utilising her unique crossover appeal and incredible following (she’s got over 28 million fans on Instagram) to be an ally for the LGBTQ community, having performed at Pride events and collaborated with Brazilian drag superstar Pabllo Vittar on last year’s thumping Major Lazer banger Sua Cara.

How excited are you to perform at the Royal Albert Hall?
I’m very, very, very excited! I just can’t believe it’s happening in my life, you know? It’s so nice.

Is this your first time performing in the UK?
Yes, can you believe it? I’ve never been there before, but I won’t really be able to enjoy it because everybody’s asking me for interviews and photoshoots, so I will try to have fun on stage. I want to show people my culture. I want to show them a mix of Brazilian music and also international songs that people know all over the world. I’ll mix all that with my stuff.

When did you first discover your love for music?
I started singing in the church with my grandpa when I was about 9 years old, which was so nice. I come from a really humble place in my country, and in this place you had no opportunity to learn music or culture or arts, so the church was like my school. Everything I learned from music was in the church.

You worked with Iggy Azalea last year – what inspired you to make that switch into English music?
Well, that was an amazing experience. I like to collaborate with other artists because I feel like I can learn from them, and every collaboration I do I learn something new. I was recently in the studio with Rita Ora, and that was so amazing, she’s such a generous girl, and so humble. When I worked with Pharrell, that was unbelievable. J Balvin and Major Lazer too, they’re amazing. I’m also only 25! So I’m still learning a lot about life.

Rita Ora is huge in the UK, how was it working with her?
She’s huge anywhere! She’s amazing, she’s so pretty, I’m such a fan. She’s humble, talented, beautiful, and her voice is everything. It was great to be with her. The work we’re doing is for her music so I can’t say a lot about that. All I can say is that it’s as great as she is.

Would you ever consider making an album entirely in English?
Yes, I would love that. I just don’t want to do it right now, because I have my country and my culture, and I want people to enjoy that side of it. I want people to listen to my music in English, but I also want them to enjoy it in Portuguese because that’s where I come from. I will always find a way to put something Brazilian in everything I do.

You’ve been compared to other superstars like Jennifer Lopez and Shakira – do you take this as a compliment, or do you want to be seen as an individual now?
It’s a compliment! They’re my reference points. They taught me how to be an artist. J Lo, Shakira, I love them both, they’re amazing, and for me it’s an honour to be compared to them.

You have a huge social media presence. How hard is it to stay on top of that while making sure you have time for yourself?
Well first of all I never ever worry about numbers. If I work thinking about that then I will never be happy, because numbers are infinitive and I will always want more. That’s not my goal at all. Whatever I do in my work, I always think about doing a great job, making a great song, or creating something timeless that I’ll be proud of. If I’ve done a great job, the numbers will come. You’re a big LGBTQ ally. Why is it so important for you to show your support for the community?
Oh yes, of course it’s important! I think that people need to respect difference. It doesn’t matter what other people do with their lives, because that is nothing to do with yours. You need to learn to respect other people, and that’s it. Some people want everyone to follow their rules, and live the way they think people should live, and that’s the case not only for the LGBTQ community but also for women. There is not a right way to be a woman, or a man, there is a right way to be human, and that is being a nice person and having a good character. People need to start letting each other live their lives and respect each others’ differences.

You’ve also performed at Sao Paulo Pride, which is huge…
That was one of the best moments of my life! More than two million people turned up. This community just hug me, they just like me, and I feel like I need to give something back to them.

Sua Cara was our song of the summer last year. Where did the idea to collaborate with Pabllo Vittar come from?
Well I had this song with Major Lazer, and I invited Pabllo Vittar to be part of the song because I like to send a message with my music, I don’t just want to make people dance and then they go home. I like to make people think about something. She was the first drag queen in Brazil that broke into mainstream pop music. So I invited her partly because I support them, but also because being a drag queen is something I will never be able to represent. It’s so difficult to go through that prejudice, to go through all the difficulties these people have faced. So I wanted to invite her to sing with me to show people, ‘Hey, let’s respect them, they are people as much as we are, they have hearts and families and lives to live’. That’s why I supported her, and I think this community now feels so represented by her and it’s really nice. I’m really happy about that.

Do you think that other artists with a platform like yours should be using their voice to promote equality?
Here in Brazil, most of the artists are like me. I won’t say all of them, because obviously I don’t know all of them, but most of them support the LGBTQ community, and they understand how important that is. I think everybody should do this, because artists influence people and their way of thought, so if they join together and say, ‘Be yourself’, I think people can follow that example.

What can fans expect from you in the future?
Well, I just do things naturally, you know? I go to the studio if I think about a great song, I do it, if I think about another one, I do that. It just comes to me naturally and then I do it. I’m singing in Spanish on a great new song and maybe an album is coming next year. We’ll see!

Anitta will perform at the Royal Albert Hall on 28 June, 2018. Tickets are available from LiveNation.