Angelica Ross releases stunning video for self-love anthem Only You 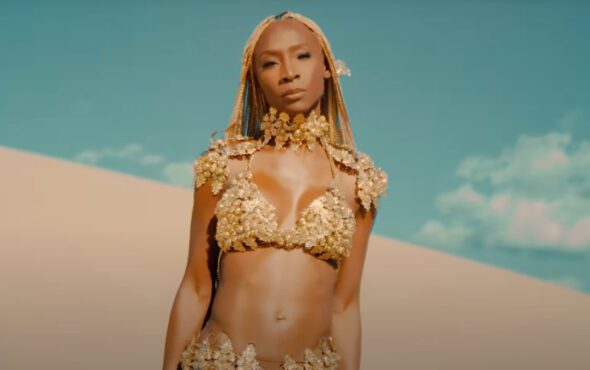 Pose star Angelica Ross has debuted her new single Only You, accompanied by a luxurious music video that features a summer romance.

Directed by Will Sikora and executively produced by Ross herself, Only You is reminiscent of R&B tracks from the 2000s.

The video begins in a nightclub as Ross enters with her Pose co-star Hailie Sahar, where she encounters a handsome stranger and is transported to the heat of a desert fantasy – thunderstorms included.

Swept away to the desert and clad in a golden bikini and embellishments, Ross radiates hypnotic summer fantasies and early 2000s aestheticism. Joined for intensely romantic scenes by her lover model Casey Dandridge, Ross is constantly at the forefront of the action.

Ross’s captivating gaze taunts and teases, leaving the viewer wanting more from this ethereal video. Yet, this isn’t just a video about romantic love, it’s about the love you have for yourself.

This anthem “is really about understanding that Only You must be the love you’re seeking before you can truly love anyone else”, as Ross explained in a press release.

In the video, we see Ross reach out to a figure when singing the chorus. While we expect the figure to be her co-star Dandridge, we become even more captivated by Ross reaching to another version of herself, kneeling towards her on the sand.

Giving the viewers a perfect blend of R&B and aesthetic beauty, Ross reminds us that it is “Only You” that can provide the love you need, and that self-love is one of the most important types of love.

The repeated chorus, “Only you can lift me up and take me all the way”, is an echoing melody of eternal love towards yourself.

The track is the outcome of a partnership between Ross, A2 Productions and producer Anthony Preston, who previously asked Ross to sing the hook on club anthem Fierce by DJ Ultra Late and Mila Jam.

Speaking to Metro Weekly last year, Ross said that this experience ignited a new musical flame for the artist and “opened up a whole new alley” to create new music.

Ross added, “I just thought as a trans woman, I’d never see the day that I’d be able to be recording and releasing music videos to the mainstream.”

Only You is out now on all streaming platforms.