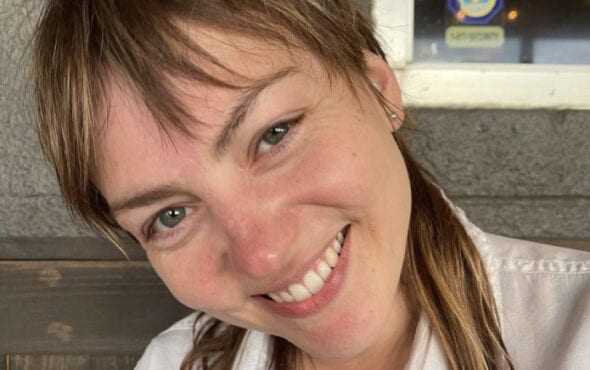 Singer-songwriter Angel Olsen has come out in a new social media post of her partner.

Taking to Instagram, the songstress uploaded a series of photos with the caption: “My beau, I’m gay.”

In the post, Olsen included a series of photos featuring a tattooed arm, loafers, picture-esque backdrops, and her partner Beau Adele Thibodeaux.

According to a report from Variety, Thibodeaux is a writer and has worked on the HBO series High Maintenance.

The Shut Up Kiss Me singer also reiterated that she was gay on her Instagram story, writing: “I’m gay!”

Olsen’s partner is no stranger to showing their love for the singer. From Valentine’s Day posts to snapshots of the singer kissing their head, Thibodeaux and Olsen are two of the sweetest love birds.

Before Friday’s (16 April) post, fans of Olsen speculated if she was part of the LGBTQ+ community.

In an interview with Rolling Stone, the Woman singer discussed the topic of sexuality and reflected on the potential life paths she debated to take.

“And then it was like… what if I’m gay… no, I’m not gay… maybe I just hate men… or I need to get married soon and have kids… or I don’t if marriage is in the cards and if I have a kid maybe I’ll just have it by myself?” she said.

She also told the New York Times that she was straight “for now” which sparked further speculation around sexuality.

Olsen is gearing up for a busy 2021 with the release of her box set, Song of the Lark and Other Far Memories.

The new record will include her hit albums All Mirrors, Whole New Mess, a brand new EP titled Far Memories with the remixes, a cover of Roxy Music’s More Than This, and alternate recording of some of her songs.

Only 3000 copies of the jam-packed box set will be up for grabs.

“I’m so honored to present such an intimate and special booklet to fans for the first time! Much love to all involved in this beautiful boxset, Angel,” she wrote.