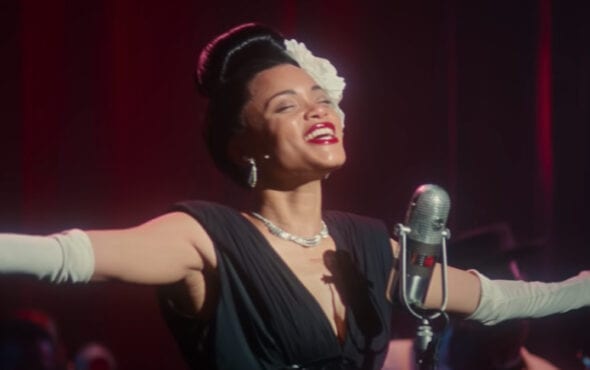 Andra Day in The United States vs Billie Holiday

The first trailer for The United States vs Billie Holiday is here.

Directed by Lee Daniels, the upcoming biopic will “unapologetically present the complicated and irrepressible life” of the legendary jazz and swing singer.

Holiday, who was openly bisexual, will be played by Grammy-nominated singer Andra Day, with supporting performances from Trevante Rhodes, Garrett Hedlund and Miss Lawrence.

Orange is the New Black star Natasha Lyonne will portray Tallulah Bankhead, a stage actress who was romantically involved with Holiday for a number of years.

The film is based on Joann Hari’s critically-acclaimed book Chasing the Scream: The First and Last Days of the War on Drugs, which examined the history of drug criminalisation.

In a press release, Daniels wrote: “Whether you are new to the story and legacy of Billie Holiday or know every note she ever sang, I do hope our celebration of this complex woman does justice to a great musical legend and civil rights activist whose artistry resonates as well today, as it did 80 years ago.

“Hulu releasing this film and giving it a platform to be seen nationwide is a blessing, because as recent events reveal, our country has much work to do in fulfilling its promise of a more perfect union.”

The United States vs Billie Holiday premieres 26 February on Hulu – watch the trailer here or below.