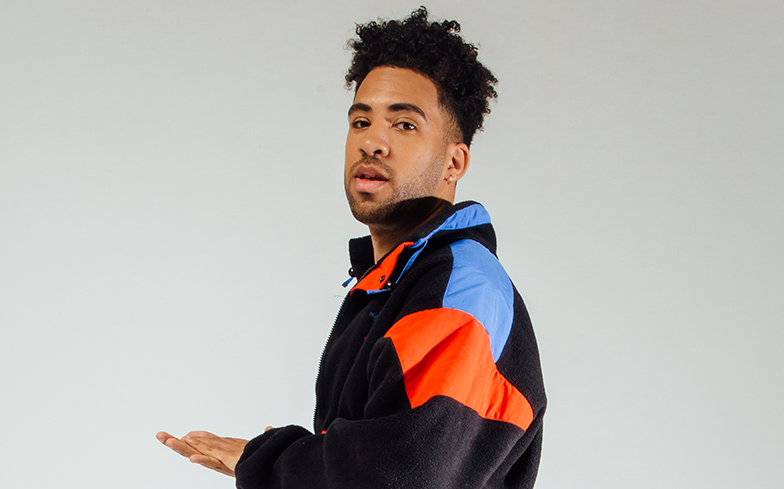 “There’s still so much acceptance we have to find as a culture, but I do feel like the time is now.”

KYLE is part of a new generation of artists who aren’t afraid to get in their feelings – especially when it comes to mental health – in a genre that historically hasn’t been very welcoming to more feminine, emotional men.

“I think that me being open with my issues is good because I want kids to realise it’s okay to talk about your mental health,” says Kyle. “It’s okay to have a mental illness.”

This week sees the release of KYLE’s debut album, Light of Mine, featuring his massive single iSpy – which peaked at number four on the Billboard Hot 100 – and collaborations with Alessia Cara, Khalid and 2 Chainz.

Here, we talk to KYLE about his friendship with Kehlani, mental health awareness, and why “the time is now” for LGBTQ rap artists.

Hi KYLE! Your album is coming out this Friday. How excited are you?

Man, I’m hella excited. It’s been two years in the making, and it also happens to be my birthday, so there’s gonna be a lot to celebrate. I’m excited!

We love your collaboration with Kehlani, and the video. How did that come about?

Thank you! I’ve known Kehlani for years now. I originally met Kehlani at a house party back in 2013, and she came over to my house to record songs. We hung out, created music. She’s such a professional, as a singer, as a songwriter. We knew she was gonna kill it, we knew she’d sound amazing, and look, she fucking murdered it. It’s almost effortless how incredible she is.

She’s part of the LGBTQ community. Do you consider yourself an ally?

Definitely! Growing up, I had a very diverse family. I pretty much had family members from every different kind of background, so I never really had to learn how to accept other people. I would definitely consider myself an ally. I don’t understand how anybody could not be an ally.

There’s a lack of gay men in mainstream rap music. Why do you think this is?

There’s still so much acceptance we have to find as a culture, but I do feel like the time is now. There’s so many new rappers that are really free to express themselves, and I think it starts there. The kind of rap I went to high school with was like Drake and Wiz Khalifa, and none of them are gay but they’re artists who are pretty much free to express exactly who they are. I feel like that kind of inspired everybody else to do the same thing, and a lot of those rappers are gay, and they’re exactly who they are, they’re completely real and uncut. I think that era of music is upon us. You see artists like Kevin Abstract and Brockhampton, I feel like what they’re doing is really liberating to a lot of fans of rap who also happen to be gay. I hate watching anyone not have a voice, not being represented, because I felt like that for a long time, too. I felt like there was nobody I could necessarily connect to, and with more and more rappers being open about their sexuality, I think you’re gonna see so many more kids feeling comfortable rapping like that.

Rap is usually seen as hyper-masculine and excludes effeminate men. Do you think this needs to change?

Definitely. That needs to change big time. It’s definitely a culture thing, having to act so ‘hard’ or masculine. Sometimes it seems like there’s no room for being in touch with your feminine side, or being in touch with your emotions in general. But that’s not anybody’s fault, you know, when rap started it started from a very hard, rugged type of place because those people were living very hard, rugged lives. That’s the reason it took us so long to even be in touch with our emotions. Drake was one of the first rappers to rap and sing about being in his feelings. For me, as a little kid I grew up with the whole 50 Cent era, and that whole era was just so hard, and I’m not that hard. I think more and more now, people are being in touch with their emotions and embracing their feminine qualities. Nobody’s just folding their arms any more – that was the wackest thing about that era, nobody danced and everybody just had their arms folded. Now people are more in touch with their feminine side, getting down and dancing, it’s more expressive like the disco era – I feel like we’re getting that freedom in rap right now.

The current generation are more open to listening to different genres of music, because of streaming. Do you think this is helping to bridge gaps between different communities?

Big time. Kids nowadays, they don’t listen to just one genre. They don’t have to go to the music store in their neighbourhood  that just sells what people in their community listen to – they can access music from around the world. We’re now all at the same music store. Obviously, we’re going to find songs from different genres that we like, and we’re not even listening to full albums anymore, we’re listening through the playlists. So we’re just picking the songs from our favourite artists, regardless of what genre they are, and just putting them all on like one big album. I would say that right now, kids growing up today are fans of every genre, and I think that is pivotal to bringing people together. Music has always brought people together, but now It’s happening so naturally and so quick. It’s dope. I try and do it with my music too, I try to make diverse music. I can make a pop song, I can make a trap song, I can make an R&B song, and it’s all me. It’s all KYLE.

Yeah, on your album there’s a lot of different genres.

It was really easy to me, to make all those songs. Making them flow on one album, that was the hardest part. Being like, ‘Okay, it’s getting too trappy now. We’ve got to be a bit more mellow. We need to add in some pop songs. Alright, but now we’ve gotten too commercial, we need to add in some real shit’.

Do you think rap can help men be more open when it comes to mental health awareness?

Definitely, and that’s especially important for minorities in America, we don’t know about that. It’s not a part of our culture. We’re not educated on: ‘It’s okay not to be okay.’ We’re taught to just deal with it. But instead of taking alcohol or drugs to self-medicate ourselves, really we should be talking about it. I think that me being open with my issues is good because I want kids to realise it’s okay to talk about your mental health. It’s okay to have a mental illness. So many people have one and don’t deal with it in the right way. It’s so important for men to be able to admit that they’re hurt.

Can you tell me a bit about your upcoming Netflix film, The After Party?

It’s a Netflix original, featuring myself and a lot of other big hip/hop names. It’s a coming-of-age story, it’s a friendship story, and it’s a ‘follow your dreams’ type of story. Also, on top of that, it’s a hip/hop story. I feel like we did a great job of bringing together the older generation of hip/hop with the new generation. My character’s name is Owen, he’s a rapper, and he’s having trouble coming out of his shell. He’s trying to learn about himself. I don’t wanna give too much away, but Wiz Khalifa is in it, French Montana is in it, and lots of other hip/hop artists. I feel like if you’re a fan of hip/hop, no matter if you’re old, young, you should watch it.

KYLE’s debut album, Light of Mine, is now available on iTunes and streaming services.