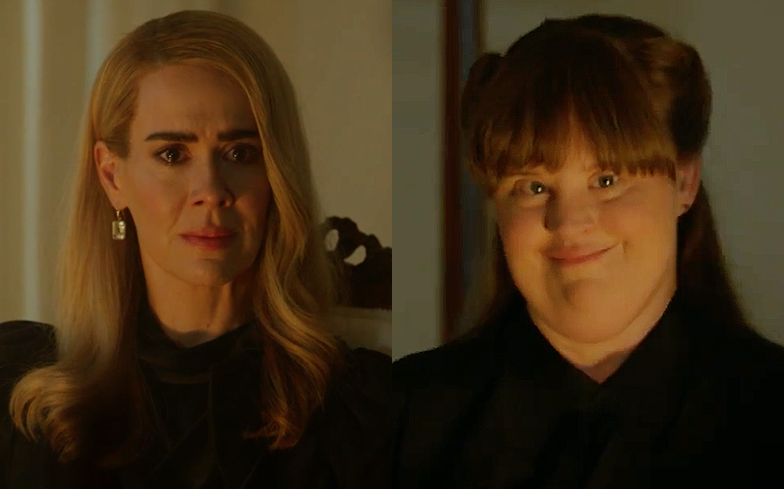 The hit anthology series is finally delivering on the long-promised Murder House (season one) and Coven (season three) crossover this season, and so far it’s been everything we could have hoped for… and more.

Over the last few episodes, we’ve been reintroduced to supreme Cordelia Goode and her coven of witches Violet, Madison, Queenie, Myrtle and Misty, and even been blessed with the return of iconique actress Jessica Lange as Constance Langdon.

While Cordelia has been celebrating having all her girls back, many viewers have been left rightfully questioning one glaring omission from Miss Robichaux’s Academy for Exceptional Young Ladies… Jamie Brewer’s Nan.

Despite not being featured in casting announcements, fans were left elated this week when the latest episode, Traitor, saw a brief but epic appearance from Nan as she returned alongside Papa Legba, the Gatekeeper of the Spirit World.

“Cordelia, long time no see… bitch,” Nan quipped when she appeared. While Cordelia expressed concern about Nan being kept in hell alongside Papa Legba, she replied: “Papa’s nice to me. I really like hell. It’s fun. I make trouble.” The episode saw Cordelia summon Papa Legba for help defeating anti-christ Michael Langdon, who’s the biggest villain the show has ever seen – he’s literally bringing about the end of the world – but he wasn’t going to offer his services without a price.

Fortunately, Cordelia turned down the offer to give the souls of all her witches to Papa Legba in return for his help. Although, as reigning voodoo queen Dinah Stevens pointed out: “Now not only will your girls die, but six billion other people will too.”

While the scene didn’t offer much in the way of story progression, it was great fan service to see two iconic characters from one of the show’s most beloved seasons, Coven, return to our screens.

So where is Apocalypse going from here? We’ve rounded up five of the best fan theories about what could happen next.