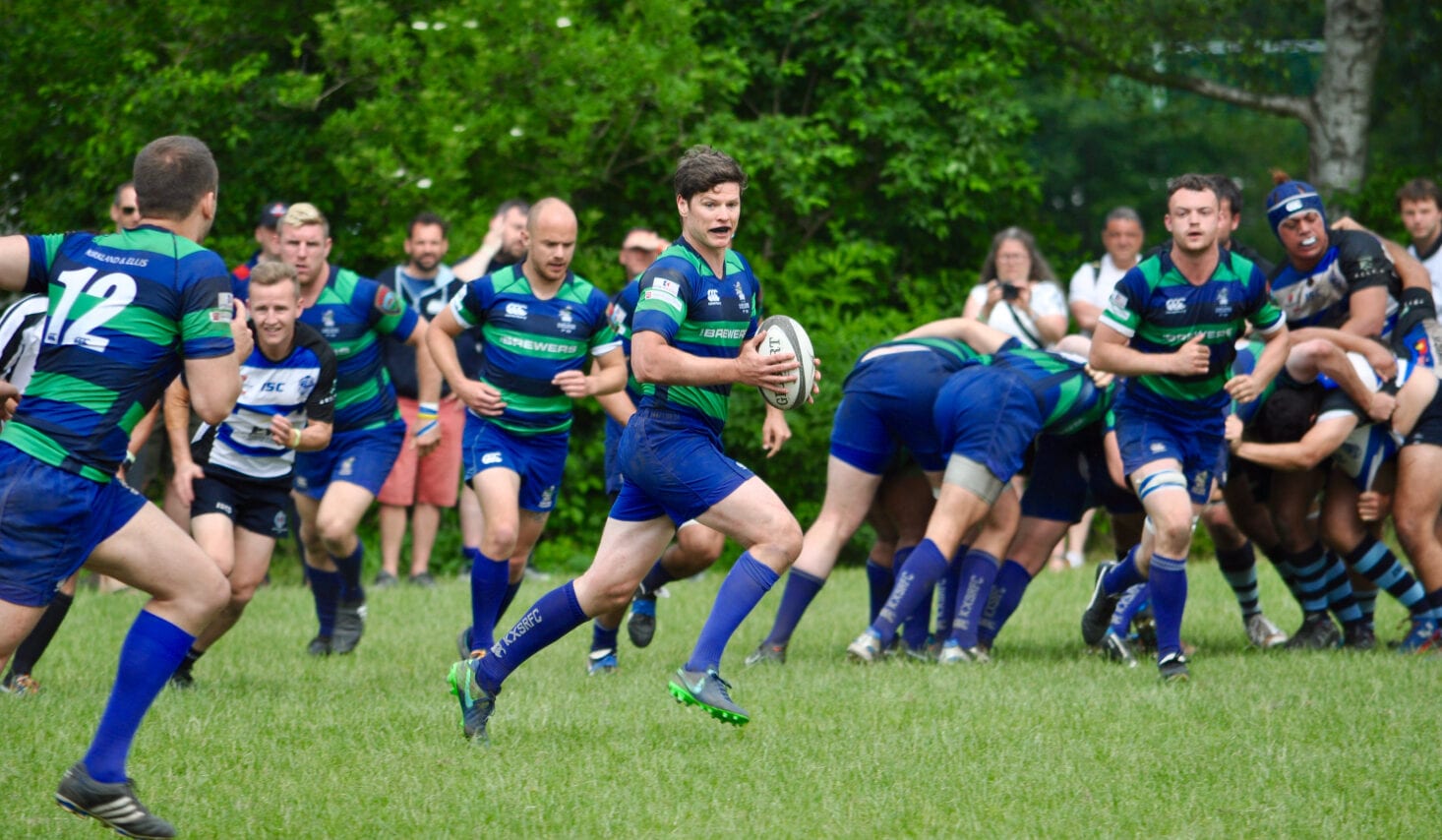 “The club changed my life,” says Eammon Ashton-Atkinson. “So, it was very special to make the film. It was almost a bit of a love letter to the club.” Following months on the awards circuit, in which it received widespread critical acclaim, Steelers has finally been released in the UK. Premiering exclusively on Amazon Prime, the documentary follows the world’s first gay and inclusive rugby club, the Kings Cross Steelers, as they compete against 60 other gay teams in the 2018 Bingham Cup in Amsterdam. Just for a little bit of backstory: the Kings Cross Steelers came to fruition on 1 November 1995 by a group of friends in a local pub, just a short distance from Kings Cross Station (hence the name), and went on to spark a much-needed gay-inclusive movement for the sport across the world. Eammon, an Australian journalist and former Steelers player, decided it was about damn time for their incredible story to be told – in his directorial debut, no less.

For those reading this who may not have the slightest interest in sport-related content, trust us when we say that Steelers is more than a story about rugby. It’s a story for anyone who doesn’t feel like they belong. Throughout the film, Eammon follows three members of the team: Nic Evans, a gay female coach and former international player for Wales; Simon Jones, a rugby fanatic who is battling his own demons after coming out as gay; and aspiring drag entertainer Andrew McDowell. All four members of the team are here on a Zoom call, laughing and reminiscing on their time making the documentary. We ask Eammon why, out of all the people involved with Steelers and their history-making achievements, he chose Nic, Simon and Andrew to represent the club. “I think because they all bring something so different,” he tells us. “Each of these storylines touch upon something that I feel is really important in the queer community.”

Although Nic – who coached the team between 2015 and 2018 – describes herself as “Marmite”, it’s hard to not fall in love with her story. In the film, she reminisces about her relationship with her late grandfather and how he used to take her to Cardiff Rugby Club to bond. These moments with her grandfather ultimately led to a vibrant career in rugby, but one without much recognition. While women are slowly – we repeat, slowly – earning respect in the notoriously male-dominated sport, Nic highlights how much work still needs to be done. In the doc, she recalls: “We went to the Ilford Wanderers in the Cup Final in Essex and one of the dignitaries from the league went straight up to Alex [Smith] and he was like, ‘Actually, this is our director of rugby.’ So, I feel like I’m still needed to be validated by men. 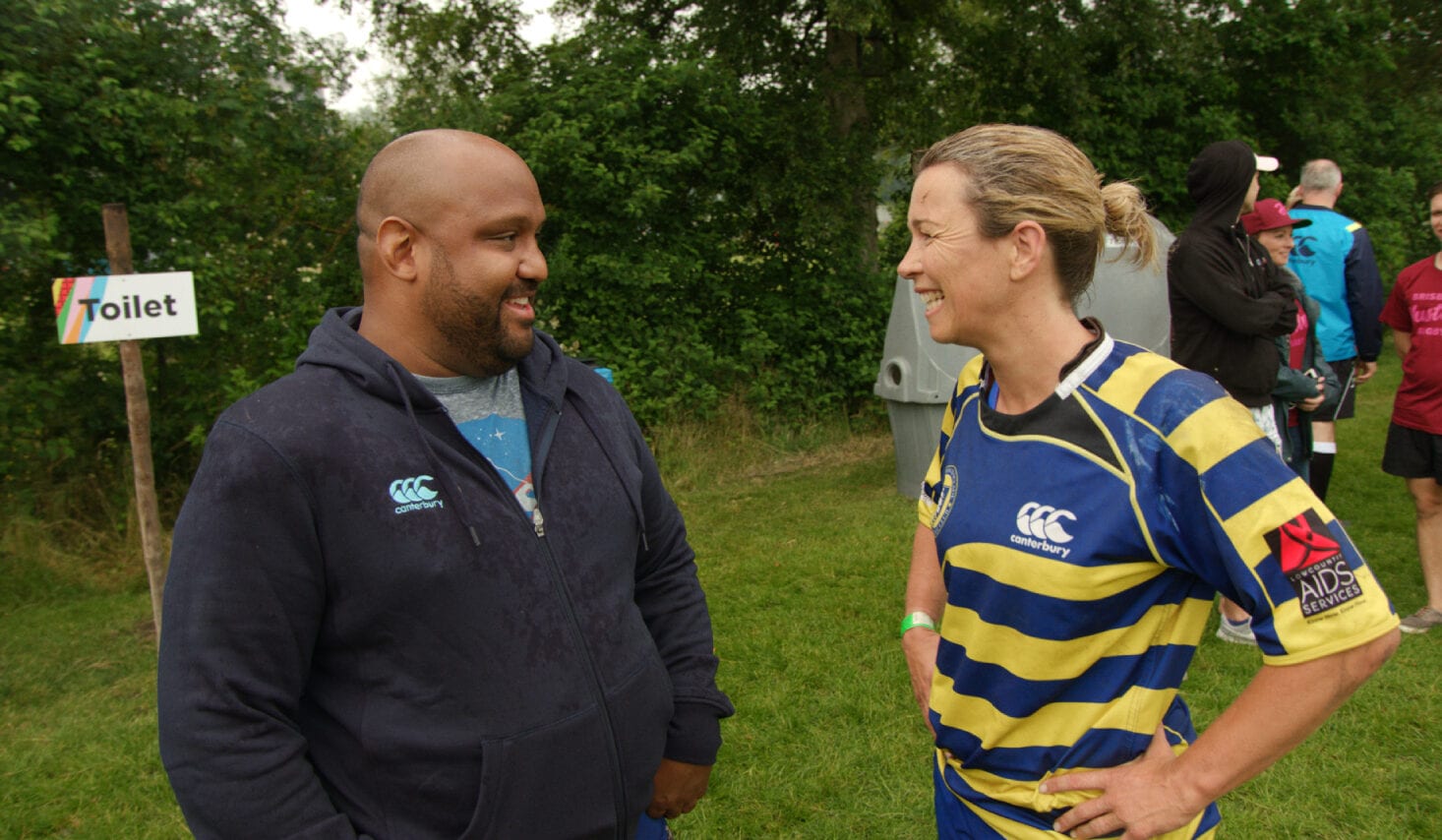 “I feel those daily struggles, and I don’t think the players see it because they’ve gone past seeing me as a female, and they just see me as the coach. Gender is invisible to them, I’m just Nic.” Two years on, Nic admits that she’s still “fighting the good fight” and trying to prove her worth as a coach. “I’m currently studying while trying to finish off my level four. So I’ll be one of the handful of women that there are level four coaches,” she says. “But I’m still struggling, I still don’t get shortlisted for roles. So, that is a fight and it’s worth fighting. I’ll just keep on learning, keep on trying to get better. Keep on proving myself.”

In one of the film’s most poignant moments, Simon recalls how, at the age of 10, he knew he was gay but didn’t know how his sexuality would fit in with society’s heteronormative expectations. He said he started to base his life decisions around his black Labrador, Rolo, as dogs don’t “need a partner” and can just “bounce around, going for walks in the park”. In 2016, he came out as gay. Although his “welcoming” brother was wholly receptive to having a gay sibling, Simon’s straight childhood friend – who he fell in love with – didn’t react favourably due to his anti-LGBTQ+ upbringing, and their relationship came to an end. This led to Simon taking antidepressants, a major aspect of mental health that is, in 2021, still stigmatised and not represented anywhere near enough on-screen.

“There’s still definitely more to do in terms of just talking about it, and in sport, for sure,” says Simon. “The roots are all about, ‘Just get on with it.’ For me, I had huge doubts talking about depression so explicitly, and so I held back. I resisted for a while, and then I just decided to do it, I tried to be as open as possible. I think it was me that said, ‘Well, why don’t you just film me taking the tablets? Because that’s the piece we don’t confront.’ Recently, my work wanted to do a special screening of the documentary. It was like, ‘Whoa, hang on. Now my work is going to know I take antidepressants?’ I think it’s quite daunting to talk about, but when you do it and it’s done, it’s a really good thing. I don’t think we talk about it enough.” 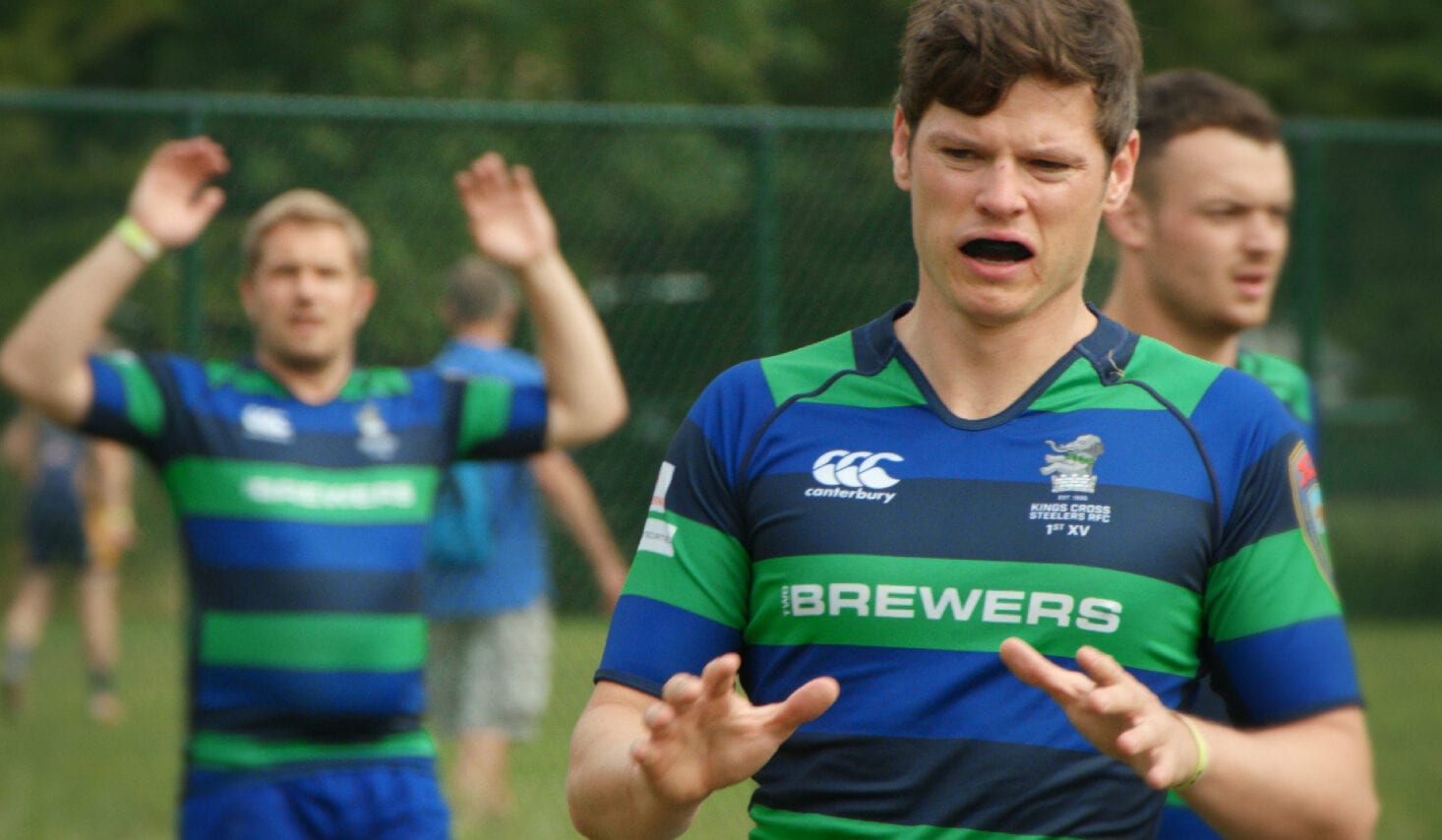 Although Eammon didn’t intend on telling his story in the documentary, Simon convinced him to do so. Eammon, who also had a passion for rugby from a young age, reveals how he was the victim of homophobic bullying after an intimate video of him and a male student was spread around his school. He ultimately repressed his love for rugby, and it wasn’t until he moved to London in his twenties when his passion for the sport was reignited. Like Simon, Eammon has struggled with his mental health. Over Zoom, he tells us how he used to burst into tears and find it difficult to get out of bed. “The moment for me was when I was driving, I was working as a reporter, and I was driving to a job,” he says. “I just had this compelling urge to pull the car onto the other side of the road and have an accident. I pulled over and called my best friend. She said, ‘Go to the doctor, and get the help you need.’ When Simon tells his story about how his friend helped him with the doctor’s appointment, it really resonated with me.”

The documentary has already resonated with viewers around the world. When Steelers was screened in Australia, Eammon was approached by an audience member who told him that they’ve never seen a film or television show have a “frank discussion” about antidepressants. He also received a message from a teenager in New Zealand who watched the film with his parents. “He said that he was really struggling, and the film gave him hope that things do get better,” says Eammon. “It’s a cliché, ‘things get better’, but you sort of need to see examples of that. In Simon’s story, we see a beautiful example of someone who, from the outside, you might make the assumption that everything’s perfect – the handsome guy who is great at rugby and has got friends. But, you never know what’s going on under the surface with somebody. I’m just so grateful that Simon told his story so beautifully.”

Steelers takes a sickening turn as it shifts to Andrew, an African-Colombian American who kicks, splits and flips as his drag alter-ego, Drewalicious. “Apparently, joining a gay rugby club can turn you into a drag queen,” Eammon jokes in his narration. Andrew, who used to run social events for the club, “swapped the spirits for the stilettos” as he launched a Divalicious drag show with two other members. It proved to be a success, and the Steelers decided to use this fabulousness to their advantage with a fundraising event, which has since become an annual celebration at London’s iconic Heaven Nightclub. It even resulted in a spin-off show, Steelers Drag Race, which sees the members reading each other and competing in lip-sync smackdowns. “To see three quite stocky rugby players in heels and makeup, doing a dance… No one was expecting it,” Andrew says in the film. “They were absolutely floored. I then realised in that moment that I got to do multiple things that I loved doing. I got to dance, I got to perform, and I got to play a character.” It shows that, not only can rugby and homosexuality go hand in hand, rugby and the art of drag can too. 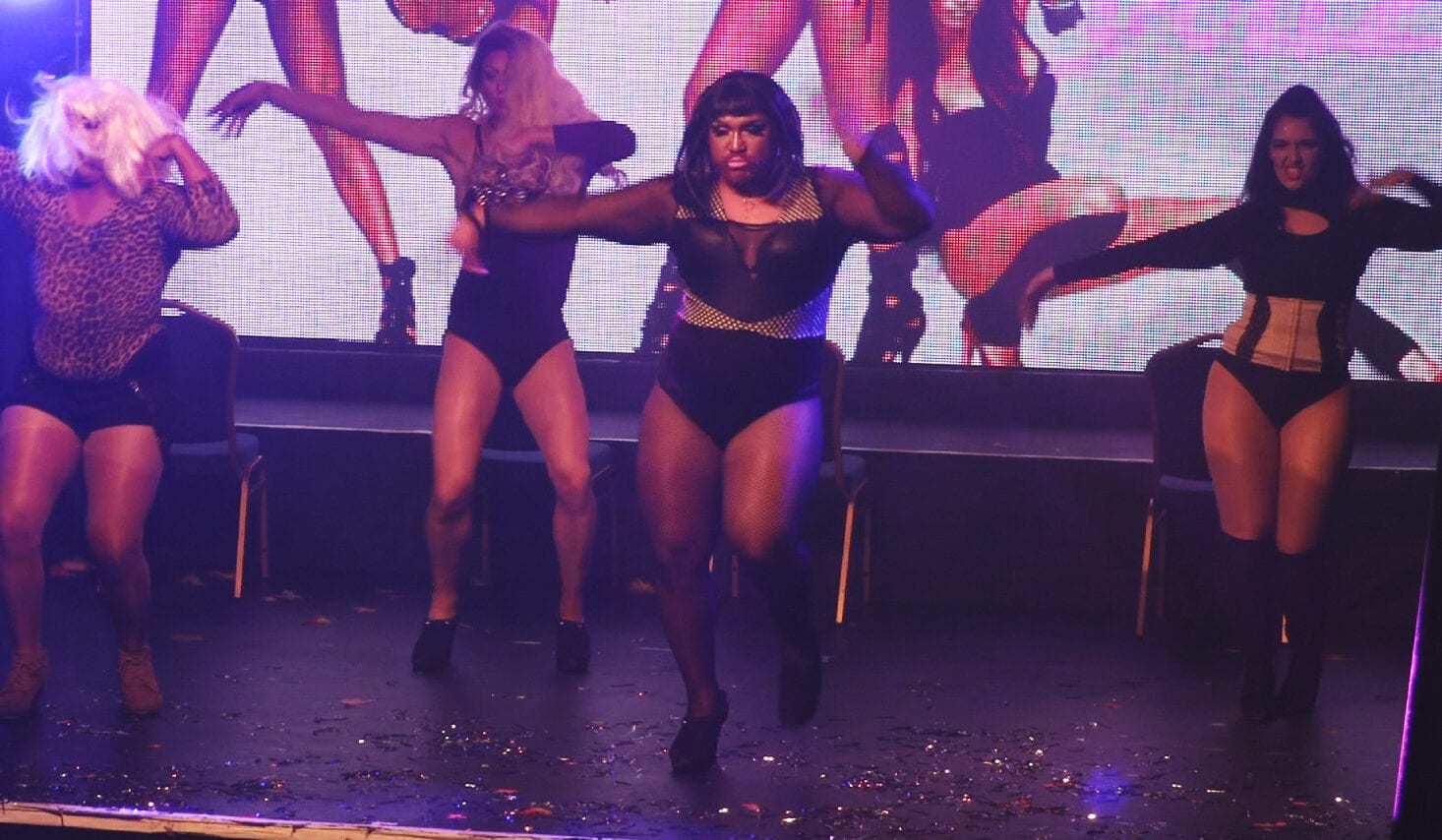 Later, Andrew states that the Steelers received backlash from some of their previous members for incorporating drag into the locker room. “They didn’t appreciate it, because they thought we were feeding into that gay stereotype, that gay men are only cissies or wanna play dress up in girls clothes,” he says, highlighting the internalised homophobia that is still rampant within all areas of sport. “Actually, they looked at it the wrong way, we were welcoming and promoting and congratulating people who are their own people; that they can be rugby players and they can be drag queens.” When we ask Simon and Nic to describe Andrew’s drag persona, everyone on call erupts into laughter. They both use the word “magnetic”.

Andrew chimes in: “Mind you, I’m not like Baga Chipz or any of them! I work in the finance and insurance industry, so you can imagine how uncreative that is. This was an opportunity for me and my two best friends to use this platform to create a space. Only recently, the gay community have been open to drag and and not associating it so much with the degree of masculinity. I think, throughout my time in the club, as I’ve gotten older, I’ve become more comfortable with myself. I’m not going to be pigeonholed into one category over another. When I’m on the pitch for rugby, I’m doing one job. When I’m in work for finance, I’m doing another job. When I’m with my friends or the drag scene, I’m doing something else. I like the fact that I don’t have to be one stereotype or one type of gay to fit into the community, whether that’s a bear or twink, whatever it might be. I’m creating my own space.”

Before we leave the call, I ask Nic, Simon and Andrew what they hope viewers will take away from the documentary. For Nic, she wants the LGBTQ+ community to know that the sporting world “can be a really inclusive place” that offers social connections, as well as a feeling of belonging. “I think that message has always been loud and clear,” says Nic. “Especially in rugby. It is a really tight knit community and there’s always a place for you.” Although homophobia is still prominent within rugby, take Australian player Israel Folau’s comments about the community ‘repenting for their sins’ as one of many examples, Simon wants “queer men and women to see that this is the beginning of a really exciting change.” He says: “I’ve come from the other side, as a closeted queer man in the sporting world, and the queer community has been so welcoming and helped me through.” Andrew echoes their sentiments, saying that queer youth don’t need to stay closeted to pursue their sporting dreams. “There are other avenues than just one queer aspect of our community that’s generally depicted or illustrated in media. This is another area that actually is available to the queer community. And, you know, we have every right to be in that space as anyone else.”

Steelers is now available to stream in the UK on Amazon Prime. You can watch the trailer here or below. 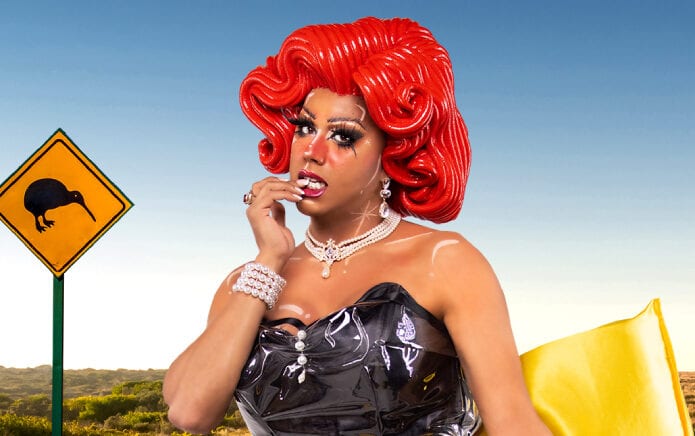 Exclusive: Jojo Zaho is embracing her status as the Porkchop of Drag Race Down Under

Jojo Zaho discusses her her time on Drag Race Down Under and who she planned to impersonate on Snatch Game. 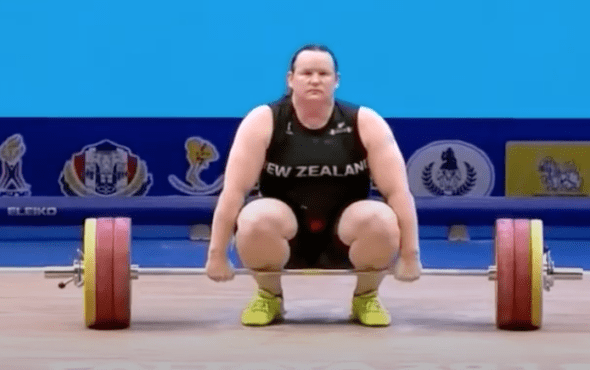 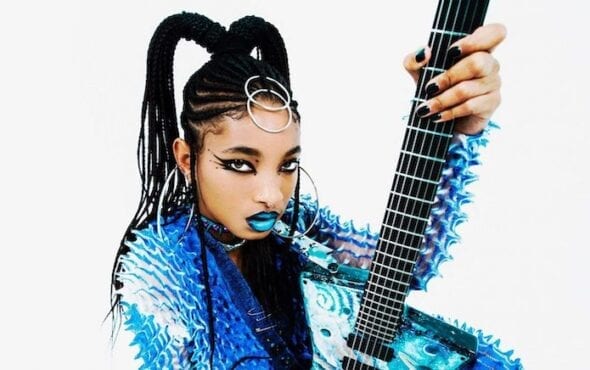 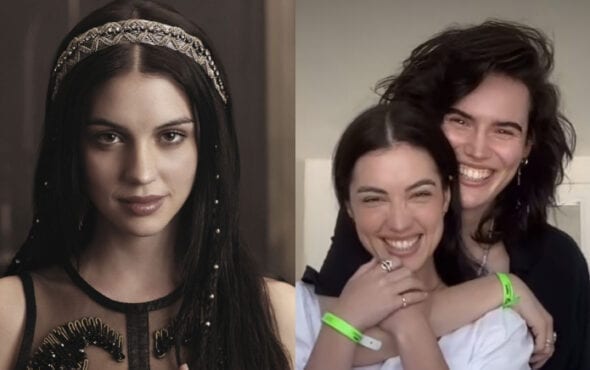