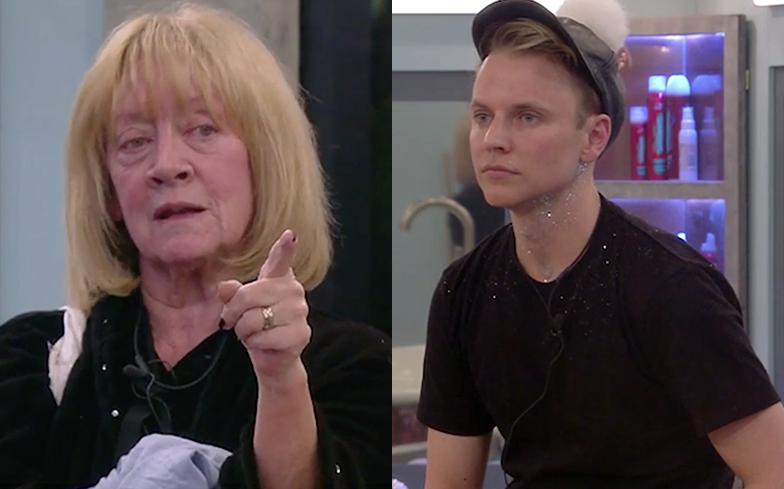 Despite her same-sex marriage, Amanda seems to think gay rights do not affect her “at all”.

Last night’s episode of Celebrity Big Brother proved to be uncomfortable for some viewers, after Amanda Barrie defended Ann Widdecombe’s opposition to LGBTQ rights in a heated argument with Courtney Act.

Despite Ann’s political voting history – which directly opposed her right to marriage – Amanda said: “I get along with her and I’m in a civil partnership. You think you’re a platform for LGBT rights!

“This is all mirror talk. You have your opinions and when you meet other people with strong opinions, you have a mirror reaction.”

Courtney – real name Shane J – replied: “The difference is I’m not dictating the way anyone should live.”

Courtney then brought up Ann’s anti-gay history, “Well to be fair, in 23 years of parliament, she voted against ever piece of pro-LGBT legislation, which is your rights as a human being.”

Confusingly, Amanda replied with: “It’s not my rights, it doesn’t affect me at all. I’m married! What are you talking about?”

“No Amanda, you have those rights not because of people like Ann, but because of the people who stood up against Ann,” Courtney retaliated.

“I’ve been like this since I was born and when we got married we didn’t ask for anybody’s acceptance, and every single person has taken it for who we are,” said Amanda. “And it’s not all about gay rights.”

Courtney replied: “I agree with that, I think a woman should have the right to say what happens to her body but Ann doesn’t think that a woman does – she doesn’t agree with abortion.”

Amanda then refused to argue with Courtney, but then – completely irrelevant to their conversation – hit out at her (iconic) entrance into the house, which saw the Drag Race star lose her skirt and reveal her tuck to millions of viewers.

Many Celebrity Big Brother fans tweeted their disappointment with Amanda’s stance throughout the situation, due to her same-sex marriage with novelist Hilary Bonner.

@JamesBesanvalle tweeted: “Ann Widdecombe actively voted against Amanda Barrie’s right to get married. So Amanda saying she likes Ann because she’s nice to her personally, is awful. Just because you think someone’s a nice person, it doesn’t mean you can’t challenge their beliefs. Amanda’s cancelled.”

“Amanda doesn’t do gay rights because by the time she wanted to marry a woman, she could, so it doesn’t affect her. Does she not get that she’s married ENTIRELY BECAUSE of the LGBT Community fighting for that right for YEARS???” tweeted @SennaLoveAlways.

@Rose_RosieChild said: “Okay let me get this straight, Amanda , a gay woman is angry at Shane J , a lgbt man because he’s trying to educate people on gay rights and is offended by homophobic opinions …. Well that’s #cbb for you.”