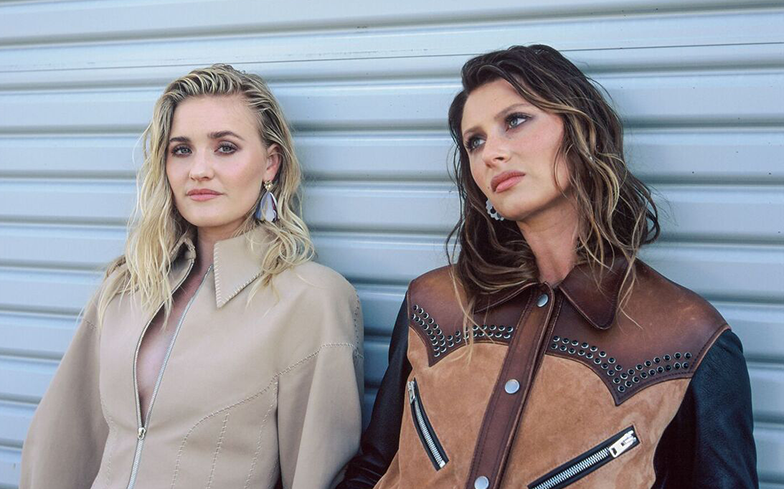 “It’s amazing that our music has helped fans realise exactly who they are and what they want in life.”

As a musical duo, Aly and AJ first slayed our existences back in 2007 with the release of their critically-lauded breakup anthem, Potential Breakup Song. The track – which propelled the stars into international stardom – became a massive chart success in the UK and the US, where it achieved platinum status.

After their second studio album Insomniatic stormed the charts, Aly – who you’ll recognise as Keely Tesslow on Disney Channel’s Phil of the Future – found success on the short-lived Hellcats, and later found recognition on The CW’s acclaimed fantasy-dramedy, iZombie. AJ, meanwhile, landed a recurring role on ABC’s comedy The Goldbergs, and is set to star in her own spin-off later this year.

Despite their enormous TV success, the girls found the time to reform as a duo and delivered one of 2017’s finest EP’s, Ten Years, which provided fans with synthpop perfection in singles such as Take Me and I Know. Today sees the release of their fan-fucking-tastic new single, Good Love, a universal love bop they’ve released in celebration of Pride Month.

We caught up with Aly and AJ to talk about their new material, changes within the music industry, and how their songs have helped gay fans come out of the closet.

Aly: Thank you! It’s only four songs, but it does kinda hit hard, which is great. That’s the goal!

You guys didn’t release any new material together for ten years. What made you both decide to reunite?

AJ: It just felt right. It took us a really long time to figure out what we wanted, and finally, it was an effortless thought. It was like, ‘Why are we not coming back as Aly and AJ?’ We’re committed to our work, we have a fanbase that has been with us over the past ten years, why not embrace that? We finally realised Aly and AJ is who we are, it’s our roots, and our fans have grown with us over the years, it just made sense.

You’ve both grown up a lot since your last release. How has your songwriting changed since Insomniatic?

Aly: I think the songwriting has changed when it comes to age. We are still writing about the same type of things, but our outlook is different. Hopefully, it’s a lot wiser, and more mature in its viewpoint. AJ and I would always try to write songs that are not just about our personal experiences, but experiences that other people might be going through. They are the true listeners. So, we wanted to make sure that our music is inclusive to people of all walks of life, not just someone who relates to what AJ and I are going through at the moment.

Can you tell me a bit about your new single Good Love?

AJ: Yeah, back in March.

Aly: We really connected with the song and we envisioned that we wanted to release it during Pride month, because of the subject matter and it being a song about love. We all view love as something that has such a specific feeling for the person that’s experiencing it, but we wanted people to have a song that is about love of any kind, so, we’re really proud of the song. It gives me very Peter Gabriel vibes, I think the chorus makes you feel great. It was slightly inspired by LCD Soundsystem too.

Since you last released an album, the music industry has changed a lot because of streaming. How has that been for you both?

AJ: Yeah, back in the day, you could go platinum within like a week.

Aly: The real positive of streaming is that your music is more easily accessible, but I think the major downside is that it’s kind of taken away a major form of income for artists and songwriters and producers, because your music is not making the revenue that it used to.

It also feels like a lot of older legendary artists struggle on streaming, and only new artists do well. Why do you think that is?

AJ: I don’t know, it’s tricky. I think if you don’t come up with something fresh, people don’t stick with you. So, new artists seem more important or more fascinating because they’re brand new. It’s unfortunate for artists that are trying to revive their career, because it can be not as much of a positive welcome, which isn’t really fair because they are doing really great work. I think you need to keep it fresh, and not a lot of people know how to do that.

Back in the day, if you didn’t chart anywhere, no one really knew your music. But now, even if you don’t chart, people are more likely to know your music, because like you said, it’s more easily accessible.

AJ: Yeah, exactly, because if you’re not charting on Billboard, or whatever else it may be, you may just be doing really well on streaming. Our EP did ten million streams, which is amazing.

Aly: Especially with having no label behind us. We put our own money into this EP, and it shocked us that we were able to get ten million streams on just organic plays, so it’s really interesting. There’s also a lot of artists that may not be on the charts, or played on the radio, but they’re selling out theatres.

Promises is your first tour in ten years. How is it being on the road again?

Aly: It’s great. We felt like children when we were walking around the bus, because we started touring when we were like 16 and 14. But we’re on one bus, with our whole band and crew which we have never done in the past. Usually, it was just us and our mom and our security guard. We feel like we have really hit our stride in terms of this tour, and feel really comfortable with the set. Going into this, we thought, ‘How are we going to make our old stuff flow with the new stuff?’ Our director really helped with that vision, and to give the fans exactly what they want in terms of recognising songs and knowing that we’re still playing the hits, but it’s something that we feel is stuck in the past completely.

Have you noticed on tour that you’ve got quite a big gay fanbase?

Aly: Oh yeah, I think more than ever actually. It’s so cool! We knew we had gay fans come to our shows in the past, but they were all a lot younger. A lot of them were also in the closet at the time. It’s really cool to see fans in the audience holding up the Pride flag.

AJ: It really is, and a large amount of our gay fans have actually come up to us and said, ‘Your music helped me come out’ or ‘I realised that my sexual preference is different from what my parents expected or wanted’. They’ve even said, ‘I feel really empowered by your music and it brought me to that place where I felt it was okay to come out’. That to me is the coolest thing to hear. It’s amazing that our music has helped fans realise exactly who they are and what they want in life.

Aly: Totally. AJ and I always tear up, and it’s one of the most insane and rewarding parts of what we do.

Well I think every single gay was obsessed with Potential Breakup Song at one point.

Aly: I think that song kind of gave us a gay fanbase, which is incredible! It’s so fun.

Cheesy question, but what does Pride mean to you both?

Aly: Every time people step out for a Pride show, or a Pride rally, that shows bravery. People saying, ‘This is who I am, this is what I believe in’ – that’s incredible. I really honour anyone that attends a Pride event and walks that event. The rainbow is much more than just a flag.

Aly, iZombie is returning for a fifth and final season. What can we expect?

Aly: Season five is our last season! Everyone is getting wrapped up on all the characters. It’ll be bittersweet, and it’ll be a great send-off for the fans, and for us as actors. We’re all really good friends on the show, and it’s going to be so sad to leave these characters, but we also get to walk away with lifelong friendships with each other. I’m not really sure what’s in store for these characters, but I’m excited about the journey they put us on. I don’t really know what’s gonna happen, but I’m so excited! I have a feeling that I will continue to stay as human throughout the rest of this season. Fingers crossed for Peyton!

AJ, you’re set to appear in Schooled, a spin-off of The Goldbergs. Can you tell me a bit about that?

AJ: I’m so excited about it! It came about in a really cool way. I’ve been on The Goldbergs for about five seasons, and we’re about to start the sixth. The creator of the show told me about a spin-off that takes place in the nineties, which is more centred on the teachers. My character comes back and becomes a media teacher at her old high school! It’s gonna be so fun, and it’s gonna be a workplace comedy about teachers and how we inform our students and the drama that goes on between student and teacher.

Do you think we’ll be blessed with appearances from Beverley Goldberg and the rest of the original cast?

AJ: I definitely think so! Our creator has talked a lot about a crossover. So I think we’re gonna have a lot of people from The Goldbergs featured on Schooled and vice versa. I am actually going back to The Goldbergs in August, to kind of round out a storyline for season six that’s really important between Barry and I, and then it will transition me into the spin-off. So, I’m gonna be working on both for a while which will be really fun.

How is it for you both, balancing your acting and music careers?

Aly: We love it, but we’ve been doing it for a while now, and we don’t wanna choose, we don’t like to choose. It’s really difficult in the sense that you have to be really strategic about what’s gonna happen when, but the beautiful thing is, with TV, there is a moment where you have a hiatus and we can plan a tour. We’re just figuring it out as we go, maintaining two careers, but it’s really rewarding and fun.

AJ: We’re gonna embrace touring as much as we can, and come August, we go back to TV land!