Alphabeat on their comeback and adoration for the LGBTQ community 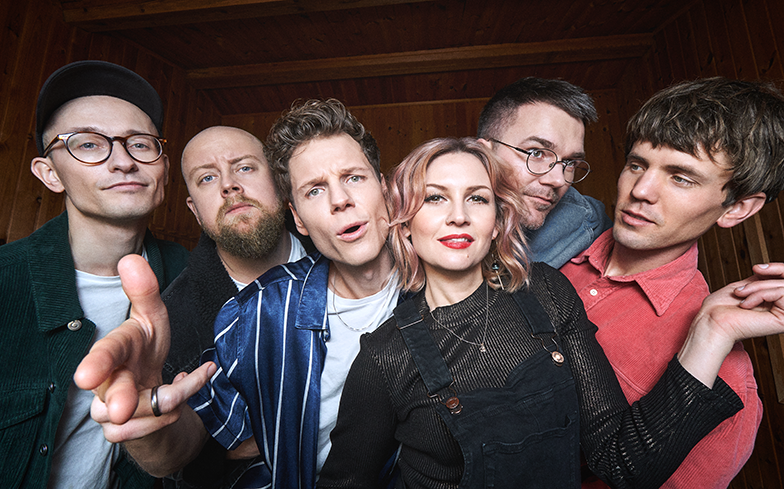 “There’s just a really special link between the gay community and pop music in the UK that’s so incredibly special.”

Danish pop band Alphabeat made their debut in the industry over 13 years ago with the release of power-pop anthem, Fascination. The critically-acclaimed bop hit the top ten in their native country and number six in the UK, where it eventually sold over 400,000 copies.

Shortly after, Alphabeat made a name for themselves in the music industry with several other pop favourites, Boyfriend (which reached the top 20 in the UK), 10,000 Nights of Thunder and The Spell (both of which topped the charts in Denmark).

The band – which comprises of Anders SG, Stine Bramsen, Anders B, Rasmus Nagel, Anders Reinholdt and Troels Hansen – then embarked on a six-year hiatus after the release of their top three album, Express Non-Stop.

Now they’re back with the fantastic Shadows, so we jumped on the phone with Stine and Anders (SG) to discuss their new material and their love for the LGBTQ community.

I love Shadows – what is the story behind it?

Stine: Well you wrote it Anders!

Anders: Yeah. Well, it was one of the first songs that we made after breaking the news to the band that we wanted to get back together, and it was made on the energy of us, the idea of us reuniting. It just came very naturally. We wanted to keep the recording true to the band sound and try and work out, going back to what we initially thought was the Alphabeat sound.

Stine: We wanted to give it a live feel.

Why do you think now was the right time to return to the music industry?

Stine: Well for us, it’s definitely not about what’s in the charts now or whatever. It’s really just about how unique it is that the six of us all feel like doing it at the same time. We’ve had five, six years where we’ve followed other dreams. Everyone’s done other stuff and that’s important because we now feel like we’ve missed this and when you look back at things, you appreciate it more sometimes. Music just happens when we’re together.

Anders: Yeah, we’ve got loads of material, songs, they come to us easily now. We work really well together. It’s just fun to be in the band again and when we went on the break in 2013, I think we just didn’t have any ideas left. We had no inspiration for songs. It didn’t feel exciting anymore and that has totally changed now. It’s like meeting up with your best friends after half a decade, you know? Hanging out, having fun and writing songs, it feels great.

Anders: We really try not to let ourselves be affected in any way by all of that. The important thing to us is just wanting to be together and make the songs, we can’t really be bothered about the structures that have changed in the music industry and all that. We just want to be true to who we are and make the best songs possible.

Stine: We have a slightly naive point of view, we think as long as we put that energy into the songs together, they will stick out and they will have an effect out there, even if it’s not number one on some streaming chart. They will affect people, and they will want to come to the gig, which is important. When you’re in the studio, you can’t just sit and look at what’s in the charts and try to make that, you’re not gonna make good music if that’s your focus.

Anders: We just really wanted to make some music that everyone in the band could be proud of.

Shadows is the first single from the album – what else can we expect?

Anders: A bit of everything. We’ve made a lot of different sounding songs. The core and the sound of them are structured around the band’s sound, but lyrically, it’s all over the place. And we’ve kind of made our first ballad! And another mid-tempo-ish song on the album that is…

Anders: Yeah, an autobiography that explains the whole history of the band up until where we are now.

Stine: But there’s also a song about going out with your girlfriends, and having a night out, which is a really great song that just makes you happy.

Anders: A bit of everything!

What is the recipe to making a fantastic pop song?

Anders: It’s difficult to explain! When I hear a song that I think is an amazing pop song, it hits me. It’s just instant and it’s some of the things that we’re working on, like cord structures and the way to go from one cord structure in a verse and the pre-chorus and the chorus. It gets very technical, but it just needs to ‘pow!’

Stine: At the same time, it has to be super simple, right?

Anders: Yeah, you have to get to the core of what you want to say. That’s the difficult thing about it, to take off all of the layers and just say it as simply as it can be.

You’ve also not performed together in a long time, so what can we expect from an Alphabeat performance in 2019?

Stine: Well practically speaking, we’ve got gigs together in Denmark, and we just started talking about the UK as well. It would be great to come back to some of those cities that we played at, London, Manchester, Glasgow. We’re starting to rehearse now so we haven’t done a live performance yet, which is super exciting, but we feel quite confident that the energy that’s always been there will just happen.

Over the years, you’ve amassed a big LGBTQ following – have you noticed?

Stine: We definitely noticed that. We lived in London for three years and we got to go to loads of gay nights and Pride! We were just talking about how much we missed that. There’s less of that in Denmark. But yeah, we often wondered why.

Anders: There’s just a really special link between the gay community and pop music in the UK that’s so incredibly special, and we miss that so much. It’s different in Denmark, it’s not the same at all. But it would be amazing to play at another Pride.

Yeah and if we love a pop act, we will stick by them.

Stine: That’s amazing as well, how faithful fans are.

Anders: You’ve got the whole pop history with gay acts as well that we don’t really have in Denmark, so I think that affects it as well, with Pet Shop Boys, George Michael…

What else can we expect from your comeback this year?

Stine: The album is the big thing for us, and the singles. I think the next one is gonna be a lot of fun. It has a lot of cheek, and hopefully a really fun video for that as well.

Anders: Yeah, and we’re playing festivals next month, and after six years, that’s very exciting. Then we’re just slowly trying to put in dates in Denmark. People just have to stay posted!