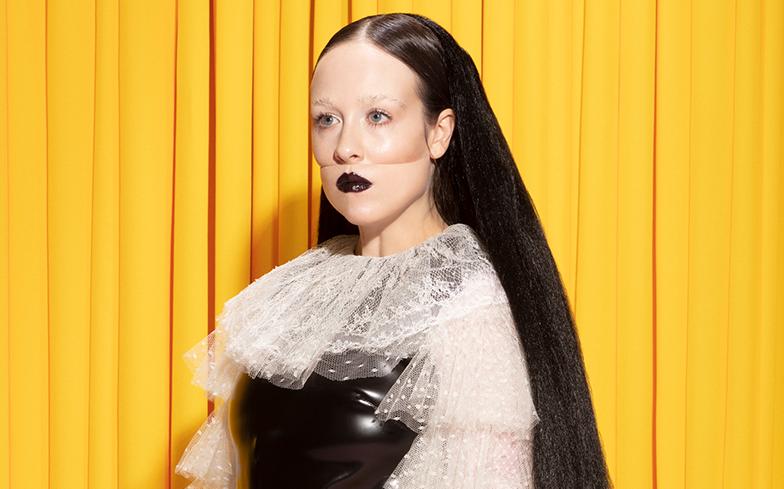 Allie X is the synthpop sensation and LGBTQ ally you’ve been searching for.

“I’ve always had this affinity towards gay culture, and gay men,” says Allie X. “I remember being in Province town, and we were on vacation, and I must’ve been like, 11? I just remember walking past my first drag queen, and I was dazzled by them.”

So it’s no wonder why she recruited legendary Drag Race winner Violet Chachki for her fierce viral video for All the Rage. The 2016 video – which saw the kweenz strut in their stilettos down the Pacific Coast Highway – dazzled us, and since then, Allie has amassed a massive following within the LGBTQ community.

With the release of her debut studio album, CollXtion II (2017), Allie cemented her position as one of the most underrated pop musicians of the decade. Tracks such as Casanova, Lifted and That’s So Us showed fans that the Canadian singer/songwriter has a special knack for crafting fan-fucking-tastic pop music, hence why Troye Sivan recruited her for his songwriting sessions. Remember Talk Me Down, Youth and The Good Side? Yeah, you have Allie to thank for those.

Today sees the release of her brand new single Focus, and you’ll be pleased to know that it’s a motherfucking jam. Here, Gay Times sit down with Allie to discuss her highly-anticipated second studio album, the LGBTQ community, and which song she’d love the Drag Race queens to lip-sync to…

You have a huge gay following, why do you think this is?
Yeah! I love my gay following. I wouldn’t give it up for the world. I think gay fans and all the gay men I’ve known since I was a kid, have been angels in my life. I’ve always been lifted up by the gay community, and there’s a nice feeling that even though I’m not widely known, the following that I do have is so passionate and so supportive, and really appreciative of every single detail that I put into the work that I do. It keeps me very fulfilled.

You’ve mentioned in the past that you grew up surrounded by the LGBTQ community. What impact have they had on your life?
Now I think about it, consciously, because I get asked about it in interviews, I’ve become associated with the community, which is great. I’ve always had this affinity towards gay culture, and gay men. I remember being in Province town, and we were on vacation, and I must’ve been like, 11? I just remember walking past my first drag queen, and I was dazzled by them. I sorta made eye contact and they waved at me, and winked, and I did the same. And I remember my dad, who’s this very like, straight, white British conservative guy, and he looked at me kind of bewildered. He didn’t really understand, like, where is this connection coming from? That’s one of my earlier memories. I remember seeing Cabaret, the revival, the musical, in Toronto, when I was like 13. I was again, dazzled and entranced.

Who are your all time favourite queens?
That’s so hard! I’ve recently got to know Sasha Velour, Shea Coulee, and I obviously love Violet Chachki, Alyssa Edwards… They all did a show in London last weekend, during Birmingham Pride, and I wanted to get on a train and come down, but couldn’t. I was so upset!

Would you appear as a guest judge on the show, and if so, what song would you love them to lip-sync to?
Are you kidding?! That would be amazing. I would then retire. Life made. I would absolutely do it, it’s a dream! I think All the Rage would be a great song to lip-sync to. Casanova and Bitches. Sasha Velour actually did a performance to one of my unknown songs, a b-side to one of my singles, called Alexandra. No one in the world knows that song, I was like what?!

Meant to be?
Exactly.

I’m checking it out right after this interview.
Do it! It’ll be on YouTube.

How’s work on your next album coming? Will it be CollXtion III?
I can’t really say! I have a bunch of new songs that I’m very excited to release, is all I will say!

Your songs are incredibly catchy. What’s your process of making a hit song?
It’s always different. I’m usually melody first, but before that, there’s a luke of chords, of a bassline, that you kinda have to inspire a melody. But there are occasions where I will be waking up, or driving or something, and I’ll immediately get a melody in my head. Sometimes, rarely, there’s words that come right away.

Are you still planning to do five CollXtions?
It’s all a journey. It was originally a projection of how long I thought it might take me to figure out, erm, myself.

You must be in a completely different place from when you released the first CollXtion.
Yeah, totally. So, I’m just sort of going along with the journey and my instincts and everything.

CollXtion II was incredible by the way. Do you feel the need to top it?
Thank you! And totally. I think all artists do, even when they say they don’t. You always wanna do better than last time, or match it. If you’ve been really successful, you wanna match your success. I think that’s why being an artist is a difficult career, mentally, because there’s so much self-worth that’s put on how well you do, and ego, insecurity. It’s kind of a balance. I try to focus on what I am feeling, and go with my gut, and also keep in my mind, ‘Well, what did the fans expect? What did they like? What do I wanna say in this political climate right now?’ You have to weigh it all up. At the end of the day, if you choose to be an artist, you should just be putting out work that keeps you creatively satisfied.

Spotify has completely changed the music landscape, and some artists argue that full length albums are dying out. What do you think about this?
It’s true. It’s completely changed. Even from the time I moved to LA, four and a half years ago, until now, the scope of things is so different. You can have success without a major label, without even being on the radio, although usually radio does come. Once you’ve gone viral on Spotify, the next step is to go on the radio, but you don’t need to. You can make a lot of money on streaming platforms, so it’s totally changed things up. Like you said, putting out a full body of work, it doesn’t work as well in the new model we have for releasing new music. I think everyone’s keeping that in mind. If you think of it like a movie, it would be hard for a director to put out a scene in a movie y’know? You wanna have the beginning, middle and end, and you want to have the concept and aesthetic choices and all that. When I’m writing, even if I know I’m not going to release it as a body of work, I like telling a story, because that’s really what I feel I’m good at. But yeah, I’ve been writing that way, and then, if I release the music as an EP it might be more disjointed, but at least it comes from a cohesive place in my mind.

You’re a frequent collaborator of Troye Sivan. How is it writing with him?
Troye is one of the most authentic singer/songwriters out there now, and does everything with so much respect. I’m straight, so I don’t want to claim to really understand things that I haven’t fully experienced, so I just try to be respectful. When I do any songwriting that has to do with representing the community, or writing with someone like Troye, I do try and make it as authentic, and as non-exploitative as possible.

Who are your LGBTQ icons?
I love Madonna. Definitely. I love Cher. There’s definitely the obvious ones. Troye is definitely one for me. All the drag queens I mentioned, and I just toured with Hayley Kiyoko and I think she’s a great voice for the community. She’s a sweetheart.

What else can we expect from you this year?
Expect a lot of surprises…

You can’t keep us in the dark like that!
I think you’ll be happy with the amount of… new things.