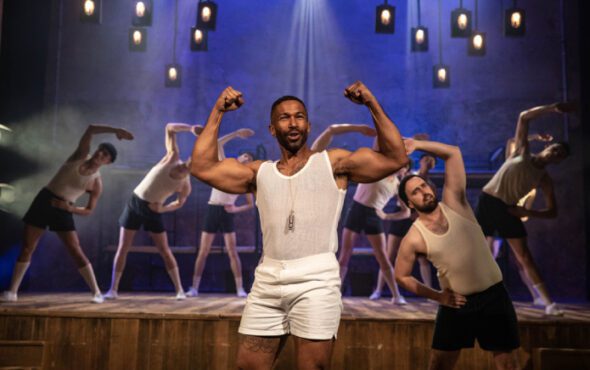 We’ve seen Sasha Regan’s All-Male company before, when they performed The Pirates of Penzance at London’s Palace Theatre back in 2020.

Having been impressed by that our expectations were high for their revival of Gilbert and Sullivan’s comic operetta HMS Pinafore at Wilton’s Music Hall and thankfully we were not disappointed – this is an absolute delight of a show from the off. Regan’s version was first staged at the Union Theatre back in 2013 before touring the UK; it’s now returned to London for a limited run.

For those unfamiliar with HMS Pinafore, it tells the story of Josephine (Sam Kipling), who is the daughter of Captain Corcoran (Juan Jackson); she falls in love with lower-class sailor Ralph Rackstraw (Danny Becker) but her father wishes her instead to marry First Lord of the Admiralty Sir Joseph Porter (David McKechnie). It’s a classic conflict of head and heart and – unsurprisingly for a Gilbert and Sullivan piece – there are twists and turns along the way. It’s also a show which neatly skewers Victorian attitudes towards class, which facilitates the rise of mediocre incompetence.

As we noted last time we saw the All-Male company – we’re really glad that men playing women is absolutely not played for laughs here; yes, of course it’s quite camp, but the punchline is never just that a man is wearing a dress. These parts are played authentically and sensitively, especially Sam Kipling’s turn as Josephine which packs a really authentic emotional punch. We also enjoyed the ensemble performers’ routine as the sisters, cousins and aunts – there are some great numbers here and some charming cutesy choreography, too. It’s a fairly simple staging – Wilton’s Music Hall is a cosy space and there’s not a lot of room for a huge spectacle. The set is mainly comprised of a couple of bunk beds and some boxes, although they’re used creatively to good effect. Music is a simple keyboard accompaniment, but that’s fine when we have singers this good on stage – and there are myriad marvellous musicians here. In particular we were impressed by Juan Jackson’s incredible bass notes and Sam Kipling’s remarkably powerful falsetto, but there are no weak links to be found in this cast.

We had a great time with the All-Male HMS Pinafore. We know the opera style won’t appeal to everyone, but this is about as accessible as it gets – it clocks in at under two hours, it’s genuinely very funny and there are some excellent performances here. Wilton’s Music Hall is a gorgeous venue, too – if you’ve never been, this is a good reason to check it out.