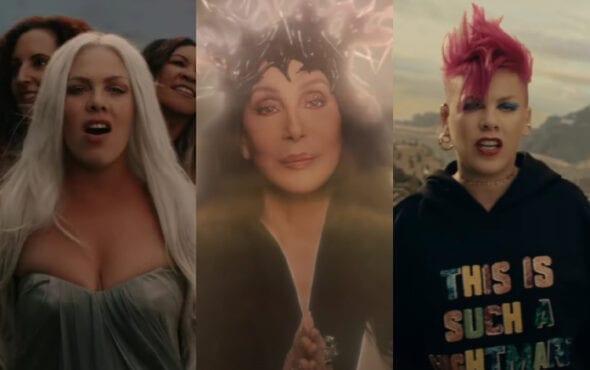 Pink has released a blockbuster music video for All I Know So Far, and it features special guest stars including – wait for it! – Judith Light and Cher.

In the cinematic visual for the track, which is named after her upcoming Amazon Prime documentary, the pop icon reads a bedtime story to her daughter, Cover Me In Sunshine hit-maker Willow Sage Hart.

Pink tells the story of her life, from her rebellious childhood to the trials and tribulations in her relationship with husband Carey Hart. Cher, one of Pink’s most high-profile stans, makes a special guest appearance in the night sky.

Judith Light also stars as an older version of Pink. The actress tries to guide a younger version of the entertainer from making mistakes, before embracing current era Pink after she’s been dragged through hell and back.

Speaking with Fleur East on Hits Radio Breakfast, Pink dived into the writing process for All I Know So Far; calling it “nerve-wracking” but exciting because the song, which was written for Willow, depicts her life story.

“I was put under zero pressure to try and encapsulate my life in three minutes,” she said. “So, that’s what I did. I wrote a letter to Willow and put it to a melody.”

All I Know So Far is the second single from Pink’s upcoming live album of the same name following Cover Me In Sunshine, which is currently smashing in Australia and several other European territories.

You can watch the incredible video for All I Know So Far here or below.

Directed and produced by The Greatest Showman’s Michael Gracey, the film will follow Pink as she embarks on her Beautiful Trauma World Tour, which became the second highest-grossing tour of all time by a female artist.

According to a synopsis, it “welcomes audiences to join her chosen family while trying to balance being a mom, a wife, a boss and a performer,” mixing footage from “the road, behind-the-scenes interviews and personal material.”

While we wait, Pink has been confirmed to join Rag’n’Bone Man at the 2021 BRIT Awards for a performance of their piano ballad, Anywhere Away From Here, with backing vocals provided by the Lewisham and Greenwich NHS Trust Choir.

Because she’s keeping us fed this year, Pink is also performing at this year’s Billboard Music Awards, where she will be honoured with the Icon Award.

“As a little girl, I always dreamed about being a singer and sharing my love of music with the world. Years later, to receive the Billboard Music Awards Icon Award is hard to fathom,” said Pink. “I feel so honored to join the ranks of music idols like Cher, Garth Brooks, Janet Jackson and Stevie Wonder. It’s a true ‘pinch me’ moment and I feel humbled and blessed.”

Here’s hoping Pink performs a medley of some of her greatest hits. She has plenty to choose from, as she’s topped countless charts around the world with pop anthems such as Most Girls, Lady Marmalade, Get the Party Started, Don’t Let Me Get Me, Just Like a Pill, Who Knew and So What.

Deep breath for more chart-toppers: Raise Your Glass, Fuckin’ Perfect, Blow Me (One Last Kiss), Try, Just Give Me a Reason, Just Like Fire, What About Us and – if the world has taste, that is – All I Know So Far.