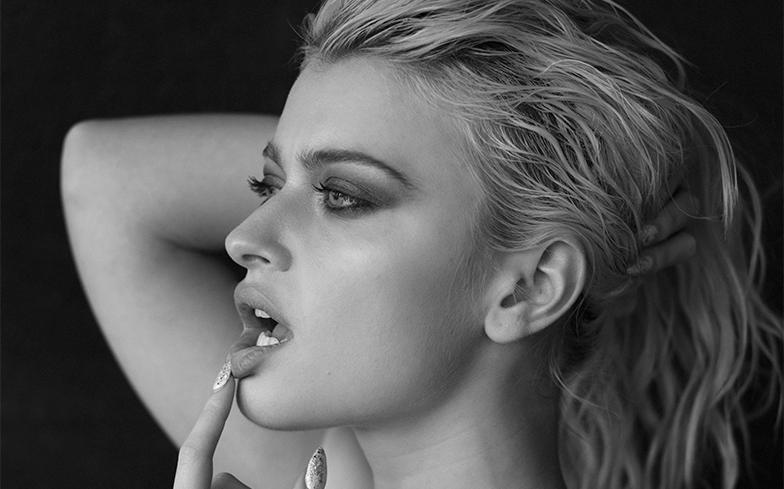 Britain’s new pop princess on her highly-anticipated debut album and her love for the LGBTQ community.

Is is too extra to say that Alice Chater has taken away our air supply? Fack it, we’ll go there, because the British singer-songwriter hasn’t let us breathe over the past year with her massive dance-pop anthems and fieeerce high-concept videos. Her clip for Hourglass? The choreography! The hairography! Beyonce and Roxxxy Andrews who?

Later this year, the pop princess will release her highly-anticipated studio album, which will consist of more powerhouse vocals and breakup anthems. She’s giving us everything we need isn’t she? “The LGBTQ community love good singers,” she tells us. “They like singers who can saaang! I’ve noticed that they all love Mariah and a full package pop star, it’s so cool!”

We caught up with the up-and-coming star to discuss her love for the queer community, what makes her stand out in the world of pop, and… the unexpected (her words, not mine).

Your new single Thief is an absolute bop. What’s the story behind the song?
This one came about because I was breaking up with my boyfriend at the time, and it was always on and off. I felt like he had stolen my heart. You know that ache and pain and it’s disgusting? I feel like he stole it. My producer Rami was like, ‘That’s the song. He stole my heart. He’s a thief.’ So I was like, ‘Yes! He is a thief.’ So I turned that into the song and then Carl Falk started the melody off on the piano, and then it all came together really nicely. It’s a nice, feel-good song.

But also a breakup anthem, and the best songwriting comes from having lived that experience.
Precisely. My whole album is practically about this one particular person who has completely messed with my head in all different shapes and forms, so I wrote a majority about him.

You’ve set quite a high standard so far with your music videos, especially Hourglass with the choreo and hairography…
The slow-mo! I love going from slow-mo to normal time, and that was something new that we tried. It was all one take, there was no cheeky little edits whatsoever. I just wanted to do one take and bring the same feeling of when you watch someone live and every kind of move they do into a video. There was no cutting and changing to different shots and I wanted to show people that I can really perform.

When can we can expect your album?
Maybe the summer. I don’t have a release date as of yet because things will change depending on releases and features coming up. I’ve got a lot of summer bops in there!

It seems like over the past few years, pop has taken a backseat on the charts. Do you think we’re now headed into another era of pure pop dominating the charts?
I hope so! I really think so because it all started with pop anyway, and we always do full circles. I love R&B and hip-hop, but I grew up listening to pop like Christina Aguilera, Madonna, Britney, Pussycat Dolls, so that’s my preferred genre really, and I love dancing to them. So I didn’t just want to make music that was popular in the charts and that would stream well, because that wouldn’t be authentic to me. I wanted to make pop songs, but big vocal-driven pop songs.

My favourite time in pop was when Nelly Furtado, Avril Lavigne and Gwen Stefani were dominating.
Yeah! And Timbaland. Gwen Stefani, I forgot, I adore her! And her music videos for instance, Rich Girl… I love that she’s a pirate for god’s sake! Why can’t we have more of those videos that I’m obsessed with? I don’t like videos where they’re just standing there looking pretty doing nothing, how is that showing off your talent, y’know? I love expressive theatrical facial expressions, which is also why I love Katy Perry. She’s hilarious in all her videos and doesn’t take herself too seriously.

There’s so many fierce pop acts emerging right now. How do you make sure you stand out from the crowd?
I try and show as much of my strengths as possible, and dancing and singing are equal to me, because I’ve grown up dancing. I definitely want to have that at the forefront, and I don’t think too many artists are doing full out dance routines. Personality wise, I don’t try and be too cool because I’m not cool whatsoever. I’m such a geek and I’m really goofy and I would never try to be something that I’m not, so authenticity is key.

You’ve received a lot of support from the LGBTQ community so far – have you noticed?
I have! I love it so much. I get messages all the time saying, ‘You’ve helped me so much, I’m glad you’re making this music! The LGBTQ community are behind you 100%!’ I’ve been getting a lot of support from Brazil recently the last couple days, and I don’t know what happened there! But the LGBTQ community from Brazil are like, ‘Wow! Oh my gosh!’ I adore it, and I loved doing Pride. That was so fun for me, to be able to come out of a bath and sing in the shower on stage.

You can never be too extra when it comes to the LGBTQ community.
Precisely! And the LGBTQ community love good singers. They like singers who can saaang! I’ve noticed that they all love Mariah and a full package pop star, so I love it, it’s so cool!

Why do you think the community gravitate to pop women like you?
I think they appreciate hard work, talent, and people who are triple threats, that can sing, dance and act. I think that they love authenticity of not being afraid to speak about sexuality through the songs.

Who were your main influences growing up?
Christina Aguilera, Pink and Gwen Stefani. I loved Britney, she always had bangers, and then vocally, I would always practice to powerhouse singers like Whitney, Mariah and Celine, they had such artistry. And Michael Jackson. When someone asks me now, ‘Who are you listening to at the moment?’ I’m like, ‘Michael Jackson… Greatest Hits.’ If I were to put on music, I’d listen to throwbacks, Celine Dion’s I’m Alive album…

I’m gonna put you on the spot with some questions… Favourite album of all time?
Stripped by Christina.

Favourite TV show?
Oh no! There’s so many! I loved Breaking Bad, Game of Thrones, American Horror Story and The Haunting of Hill House, I really loved that. That terrified me.

Favourite film?
This is so embarrassing, I always say Titanic and people are like, ‘Alice!’ But I love Leonardo DiCaprio. No actually, I’m gonna say Girl, Interrupted. I think that’s fire. I love Angelina Jolie, and I love Maleficent.

Now I’m gonna ask: Favourite artist right now?
Camila Cabello! She has star quality, that’s why I love her. She goes on stage and you can’t stop looking at her.

Final question: What can we expect from you in 2019?
More really high concept videos, lots more live shows, hopefully some festivals, an album! And… the unexpected. I’m not afraid! I’m not doing things because I think it’ll get loads of streams, ‘Ooh it’s gonna be on the charts.’ I’m taking loads of risks.

Thief is now available on iTunes and streaming services. Listen below.