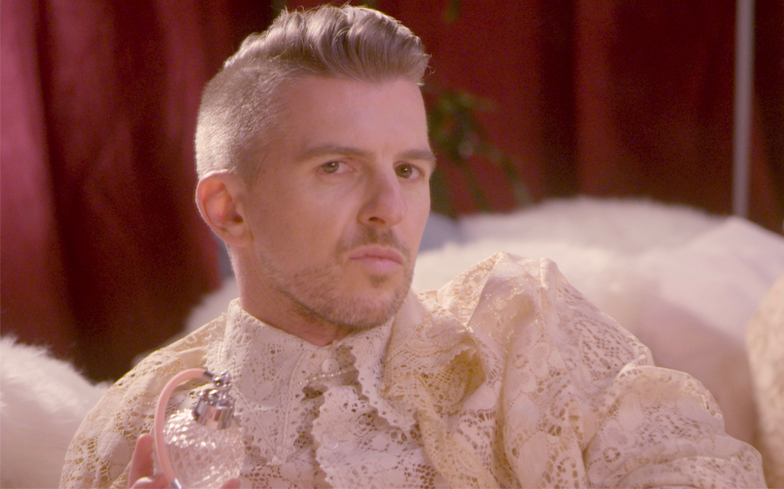 “Brands and corporations are so thirsty for a piece of the queer pie, it’s like, chill out.”

Say hello to queer electronic musician Alex Black who has been making and performing his distinct brand of “lo-fi pop stuff” in Los Angeles for a decade.

Those projects have seen him fronting various groups, but last year he decided to release his first solo EP, Baby. The six-track collection features his latest single Gutter Streets, and its dramatic music video packed full of effortless style, throwback fashion, and a bit of blood-thirsty violence for good measure.

Gay Times caught up with Alex Black to talk about his striking new visual, when we can expect the full-length solo debut, the challenges that face LGBTQ artists in 2018, and what his favourite thing about being a part of our community is.

What’s the story behind Gutter Streets?
The gist of the song is basically ‘LA is a mess and so am I, and that’s ok.’ LA has this history of self-destructive behaviour, of erasing its own past, embracing car culture to its own detriment, and so on, but it still somehow ended up in this great place. I really liked that concept — that you could be self-destructive and make bad decisions but somehow land somewhere good personally or creatively as a result of that behaviour.

What inspired you to do a video influenced by Freud’s theory of the death drive?
The death drive is usually thought of as negative, but the song is really about reframing that — essentially saying that self-destructive behaviour can be a source of growth and creativity. For the video, I wanted to take that to its literal extreme by actually inviting in my own destruction and taking pleasure in it.

Do you think the queer community has serious issues when it comes to being susceptible to addiction and self-loathing?
I can’t speak for everybody, but definitely among myself and a lot of my friends there seems to be a susceptibility to both of those. But I don’t necessarily view either as entirely negative, as long as they don’t overtake you. If you can make it to the other side, there’s an opportunity to see how we’re all dealing in fucked up ways with the collective trauma of being queer in a straight world. We can find commonality in that and laugh about it. I think that experience, as hard as it can be, fuels a lot of us creatively.

What has been your journey to this point in your career so far?
I’ve been making music in LA for about a decade. I’ve played in bands like WEAVE! and Softness, performed lo-fi pop stuff under various names, received a master’s degree in music composition, done a lot of performance work with my longtime friend and collaborator Samuel White. It’s all been a bit haphazard. The EP Baby that I released at the beginning of the year is really the culmination of all those things. It’s my first solo release but it definitely contains bits and pieces of everything that came before.

In your experience, what are the biggest challenges LGBTQ music artists face in 2018?
It almost feels like being queer is an advantage these days. Everybody wants in, and that’s great. But the flipside of that is tokenism and being used as a marketing tool. Brands and corporations are so thirsty for a piece of the queer pie, it’s like, chill out. Queer artists need to be wary of being exploited and also make sure that any gains in terms of acceptance and visibility reflect the diversity within our community. What can we expect from your full-length debut when it lands in the new year?
New songs! I don’t really know yet, it’s still taking shape. Definitely more ‘80s-style stuff but also some more futuristic pop stuff.

How does your music career inform your performance art, and vice versa?
Music and sound are so emotionally accessible, they’re crucial to most performance art. I always make original music or sound design when I perform. On the other hand, I think the critical thinking and theory that goes into performance art has also influenced my music-making and the visual presentation of it. I made a music video about a Freudian concept, you know?

How important is queer visibility – especially in the current political climate?
Very! And people are really showing up. I’m so impressed by how visible and vocal people in the community have been as these right-leaning parties around the world rear their ugly heads for (hopefully) the last time. People need to be more queer and more visible than ever before, and I think they have been for the most part.

What’s your favourite thing about being a part of the LGBTQ community?
Honestly? Queer people are special. I feel it. You feel it. It kind of feels like we’re all part of a special club or something and I wouldn’t have it any other way.

You can download and stream Alex Black’s Baby EP now.