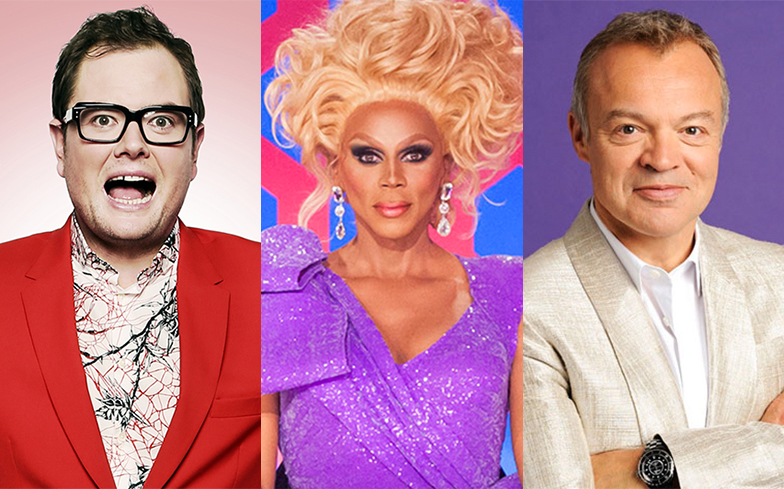 World of Wonder have finally confirmed the two other regular judges for Drag Race UK!

British icons, Alan Carr and Graham Norton, will join RuPaul and Michelle Visage for the highly-anticipated British spin-off, which is due to premiere on BBC later this year.

The comedians – who currently host their own talk shows for the BBC – will rotate positions on the series, much like Carson Kressley and Ross Matthews on the American version of the series.

Alan also released a video to announce the news and provided us with the most sickening death drop in HERstory. Laganja, Alyssa and Kennedy: watch out hennies!

“Wow! To be sat next to Michelle Visage and Mama Ru as a guest judge on possibly one of my all-time favourite shows ever is a dream come true,” he commented. “I can’t wait to see what the UK queens have got in store – it’s going to be sickening!”

Mama Ru said she was “both shocked and delighted” when Graham and Alan told the Emmy Award winning host that they would be “wearing tucking panties when sitting at the judges table.”

AND wait for the death drop…@AlanCarr will also be on the judging panel for @RuPaul's Drag Race UK.

She continued: “I told them it was not necessary, but they insisted. Now that’s what I call dedication!”

Michelle was confirmed for the panel earlier this month, and while we never doubted that she would join Mama Ru – after all, she’s made no secret of her love for the UK – it’s great to have confirmation that she’ll be gracing our screens later this year.

“We’ve been working tirelessly to bring the magic of RuPaul’s Drag Race to my favourite city in the world: LONDON!” said Visage. “I KNOW the UK has a wealth of talent to offer and I’m thrilled beyond belief to see these queens battle it out on the main stage, UK style! GOD SAVE THE QUEENS!”