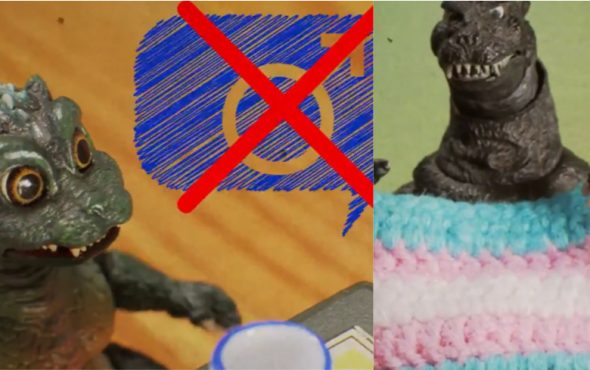 “Godzilla is a better parent than most humans.”

2020 has been full of terrible things happening one after the other, but thankfully there is some light in this very dark tunnel. To mark the end of Pride Month, stop motion artist and video producer Cressa Maeve Beer released an adorable short.

In the short, Godzilla prepares to battle Baragon, before noticing his child in a state of distress. Godzilla stops the fight, but his child runs off.

Back at home, the child watches Sailor Moon and cries to herself in bed, before approaching her father. As the pair settle down for a cup of tea, she confides in her father about her gender identity, saying she is a trans girl.

And not only is Godzilla the King of Monsters, but he’s also the King of Supportive Parents as he immediately accepts his trans daughter. He then later performs research, and knits his daughter a beautiful trans pride flag.

The pair then go to continue Godzilla’s fight against Baragon as a father and daughter team.

The short is a beautiful piece about parents supporting their trans children, and the message resonated with the official Godzilla Twitter page, who shared the video, writing: “Thanks to @beeragon for putting together this amazing short titled ‘Coming Out.’ #HappyPride”

And while pop culture showing support to LGBTQ+ matters often attracts the worst of the trolls, this tweet managed to attract a lot of support instead, so far gathering close to 21,000 likes.

One person wrote: “Godzilla is a better parent than most humans.” In a similar vein, another person added: “When Godzilla is more progressive then most people.”

Another then wrote: “This is literally the most wholesome thing ever. Thank you Toho for being supportive of trans rights and the LGBTQ community. Also, some of you people on this post need to calm down like who cares if baby Godzilla in canon is trans now. That would be so awesome and cute.”

Godzilla is a better parent than most humans. (T^T)/

There will never be a better moment to share this GIF. pic.twitter.com/deJ7DVKjHp

When Godzilla is more progressive then most people.

I think I shed a tear pic.twitter.com/bxnygqfOji

I wish I had gotten a Godzilla hug when I came out.

this is the cutest shit ive ever seen in my LIFE