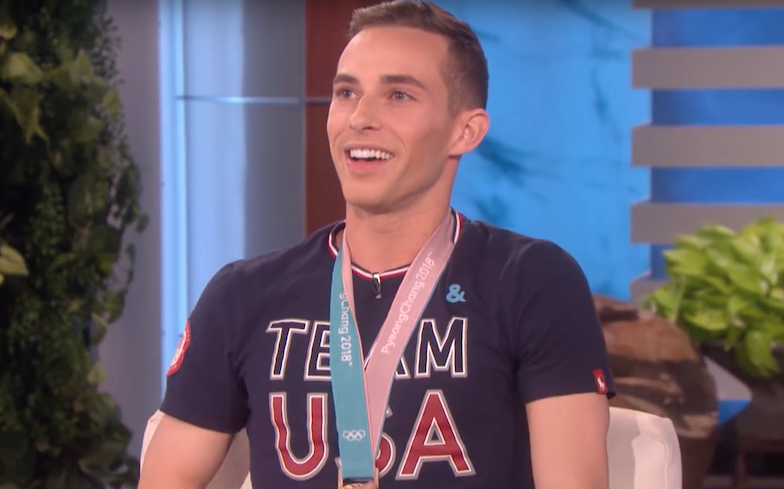 Going into the Winter Olympics we all knew Adam Rippon was a fierce presence on the ice, but after his heightened profile following his bronze medal win, his sense of humour and candid attitude during interview has been a revelation.

Whether he’s rocking the Academy Awards red carpet in a leather harness, tracking down his celebrity crush Shawn Mendes at a showbiz party, or becoming best pals with Reese Witherspoon, he’s stolen hearts all over the world.

Even when he’s up against an awkward question about dating apps in the Olympic athletes’ village being a “hotbed of sexual Grindr,” he has the perfect response.

“Here’s the thing. The condoms aren’t special,” he told the New York Times. “The reason that they go through so many is because people like me take maybe 400 of them and I have little gift bags for my friends. They’re just like Korean — it says latex condom, but in Korean.

“But you know what, when you’re in a high-pressure situation and there’s like beautiful people all around, yeah, emotions get going.

He added: “But as somebody who’s 28, I’m not about to find somebody, try to sneak around five different roommates, lock a door and go through all of that. I’ll let young kids have this sexual camp experience here at the Olympics. I’ll just sit back, I’ll wait, and I’ll figure it out when I get home.”

The figure skater also revealed that he has spoken to closeted athletes about his own experience of coming out in the spotlight.

“I heard from a few athletes actually when I was in Korea, and they asked me about my experience. I think everyone’s circumstance is a bit different,” he said.

“For me I found that I was a lot more confident in who I was after I came out publicly. When I was coming out, I read a lot about other people’s coming-out stories.

“I really felt like they made it so normal and it wasn’t a big deal and that their life still went on.”

His relationship with fellow out athlete Gus Kensworthy also made headlines when they shared a kiss in defiance of US Vice President Mike Pence – and the internet went wild.