Ada Vox: ‘Katy Perry wasn’t sure if American Idol was ready for a drag queen’ 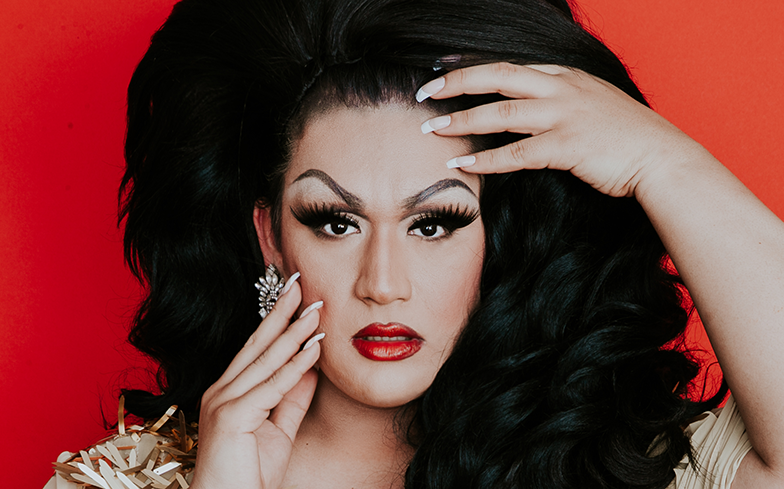 “She [Katy] said she wasn’t sure if America was ready to have a drag queen on that platform. And you know what? In the end, she was 100% right.”

Earlier this year, former American Idol contestant Adam Sanders sashayed back into the music reality competition as his fierce AF drag persona, Ada Vox, and left us slain with a stunning rendition of House Of The Rising Sun by The Animals.

Week after week, she served looks and powerhouse vocals, and even performed with American actress/singer Lea Michele for a mind blowing performance of Defying Gravity. Her elimination sparked controversy online (she left before reaching top seven), and ever since, she’s become one of the most popular American Idol contestants ever.

Now, she’s released her official debut single, Because of You, a stunning uplifting dance anthem. We caught up with the groundbreaking contestant and discussed her music, her time on the show, RuPaul’s Drag Race, and why Katy Perry thought American Idol (and America) wasn’t ready for Ada Vox.

Hi Ada! I’ll start with an easy question: when did you first do drag?
Hi Sam! I think I’m about four years into it. I think my first time was… I was 21-years-old, and it may have been… My first time performing was June of 2015 or 2014, whichever one was four years ago!

What inspired you to do drag?
You know what? I was invited to do Pride for the very first time in my town, after the first time I competed on American Idol on season 12. When I was on there as a boy, I was invited to come back as a headliner for our local Pride. When that happened, that was the first time I’d ever heard anything about Pride. I never knew anything about it, I didn’t know we had one, I was very sheltered for the most part. That was the first time that I ever saw a drag queen in person. I didn’t know what drag was, I didn’t know that we had this huge community, and when I saw it I was like, ‘Hey! There’s something that I think I could do with, you know?’ Everyone’s lip syncing, everyone’s dancing, no one’s singing. I went ahead and said, ‘Let’s give this a shot, and see if I can switch things up a bit.’ So I did that, and I haven’t stopped since then.

What inspired you to go on American Idol as Ada?
I’ve auditioned for the show over a course of eight years, a total of 13 times! I decided that something wasn’t clicking. The thing that I had thought about was people telling me I’m not marketable, and there’s no way to push me out to the audience, that i needed something to catch people’s attention. So this last time I just said, ‘Hey, you know what? I’ve being doing this drag thing for a couple of years, let’s give it a go and see what happens!’ I went ahead, showed up in drag, and I guess it worked out!

On the show, you served some looks. Who are some of your inspirations in the drag community?
My goodness! I have a lot of inspirations here, locally, from my hometown. The first drag queen that ever spoke to me became a good friend of mine. She was the first one I ever saw in person, and she was really scary, but she was the first one who ever befriended me. Seeing her on stage, seeing what she did, really inspired me to go ahead and give it a try.

There’s not been many drag contestants on music reality competitions. Why do you think that is?
I don’t mean to say this to sound any type of entitled or anything, but I feel like I’ve always had the talent I needed to carry me through a competition like this. And the drag aspect of it all was simply to add a factor of marketability and for ratings and stuff for the TV show. But I think the main reason was that I had the talent to carry me through every single one of the trials. If I didn’t have what I needed vocally, then I wouldn’t have gotten the responses that I did from the judges. They loved me every single time and they supported me the entire way, because they knew that I was extremely passionate about all of it.

What kind of feedback have you had from fans since appearing on the show?
Oh my goodness, it has been so fantastic. I have had people from all over the world just telling me how much I changed their lives, and given them confidence to live their true selves. I am absolutely beyond grateful for the opportunity to touch people the way I have. The feedback hasn’t stopped. I appreciate and love every single person that comes to me, letting me know that I’ve changed something in their lives or made it easier for them to be themselves. What was it like having Katy Perry as a judge?
Katy was absolutely wonderful. In the auditions, I don’t remember if they showed it or not, but she was actually the only judge who was on the fence about me. The reason why she was on the fence about me was because I was a drag queen. It was because she was thinking ahead, and she said wasn’t sure if America was ready to have a drag queen on that platform. And you know what? In the end, she was 100% right, but she believed in my talent from the beginning. As someone who has been a fan of hers for standing so strong as an ally for our community, for the entire time that she’s been in this public spotlight, it meant so much to me that she was willing to be so real with me. She gave me the opportunity to let me talent speak for itself.

Your debut single, Because of You, is really powerful. Can you tell me a bit about the song?
Absolutely. The song was written by a wonderful songstress, Janice Robinson, who is on the X Factor UK this year. She’s become a wonderful friend of mine. We are yet to meet in person, but we’ve been in communications via text and phone calls and whatnot, and she actually wrote that song. I am beyond grateful for the opportunity to bring her work to life, because it was written a while back for someone else, and then they recorded it as a demo, and it so happens that that person worked with my agent. She played the demo for me one day, and I said, ‘Oh my goodness, I love this song.’ The first thing that came to my mind was, ‘These words mean something.’ My style of music is not dance, that’s not my thing, but the lyrics mean more to me than anything else. When I listen to music, I listen to what it means. I felt like it was an extremely fitting song for me to release as my debut single because of everything that I had been through. I have been singing professionally for 12 years trying to get my break, and struggling. I just felt like it was perfectly fitting.

Can we expect an EP or a full length studio album? What are your plans?
I have plans for both of those things, but the wheels aren’t turning in the studio just yet because I’m doing a lot of my own writing for this one. I wanna make sure that everything means something. I feel like it’ll be better to work on the project a little longer and put out a real quality product, instead of rushing it out too soon. I am working, and a little random thing I have in the works is that I’d like to do a short Christmas album. It’ll be really fun!

Have you ever auditioned for Drag Race, and if not, is it something you’d consider?
I have never auditioned for Drag Race. I’ve only been doing drag for four years, so I’ve never considered myself ready. On top of that, I don’t really consider myself a quote on quote “competitive drag queen”. I’ve always considered myself a singer first and foremost, so that’s always been my focus. But at this moment in time, it is something that I have considered. Maybe when all this slows down, or if it doesn’t work out the way I would like, maybe I’ll take another route. Who knows? Maybe Drag Race would give me that big platform to take off. I guess there’s only one way to find out, and only time will tell!

Lastly, and it’s a bit of a difficult question, but what mark would you like to leave on the music industry?
I would like to leave behind a legacy of being extremely thankful and appreciative of opportunities that we as people are granted, just being the world in general. Nothing is done on our timing. I want to leave a message of perseverance and really being a try hard type of person, leading the way to success. I think that’s a very important thing that I’d like people to take with them. I like to think I speak very well for equality, and for everyone to have the opportunity to live their best life. But also, if you come for me, I’ll kill you [laughs]. If you come for me, you will be cut! I’m a nice woman, and I speak for all these things, but don’t come for me! You know what I mean though? I have an extremely high tolerance, but as soon as you speak to me wrong honey, you gonna get a little something something!

Listen to Ada Vox’s fantastic debut single, Because of You, below.