ABBA Voyage concert review: A thrilling experience unlike anything you’ve seen before 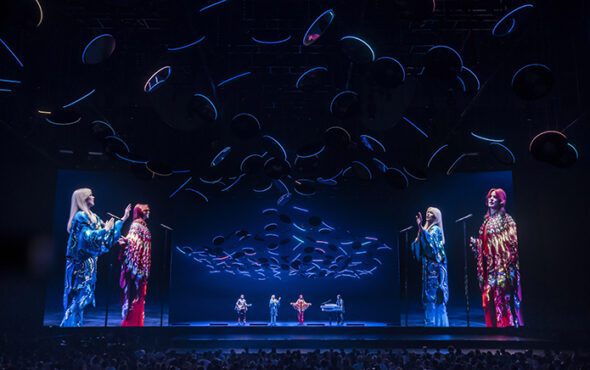 The prospect of an ABBA reunion tour was always going to be a blockbuster event – but I don’t think any of us expected it to be to such an extent. Their big comeback – ABBA Voyage – is a dazzling feat of technology that is sure to transform the future of live music and entertainment. Forty years since Agnetha Falkstog, Björn Ulvaeus, Benny Andersson and Anni-Frid Lyngstad last played a headline show together, they have been recreated as digital avatars – named ABBAtars – for a revolutionary new concert experience which sees them reel off many of their countless hits, old and new.

The experience is the work of Industrial Light and Magic, who know a thing or two about blockbuster events after working on visual effects for both Star Wars and the Marvel franchise. More than a billion computing hours were needed to create these boundary-breaking ABBA avatars, with a thousand ILM VFX experts working on the project across four global studios. They are not holograms, we are told, which we have seen used by other legacy artists over the past decade. In the specially created ABBA Arena in London’s Queen Elizabeth Olympic Park, the digital ABBAtars look more solid and realistic than their hologram counterparts, and certainly move more smoothly with a lively energy. This may not be the ABBA reunion some may have been hoping for as it doesn’t involve the physical presence of the band themselves, but that’s not to say it doesn’t provoke an emotional connection. The sheer scale of the immersive staging in the 3000-capacity ABBA Arena draws you in immediately, and opening tracks The Visitors and Hole In Your Sole give you the space to marvel and adjust to the extraordinary display of ingenuity it has taken to create this show. There’s a 10-piece live band to the left of the stage that brings all of the ABBA classics to life, giving the tracks that concert feel. Within a few tracks, you’ve forgotten that the digital avatars performing on stage aren’t sentient beings. Even when each of the avatars take a moment between songs to speak to the crowd and knowingly reference the fact they look much younger, the humour, warmth and star power of each of them somewhat grounds their digital form in reality.

This being ABBA, the hits come thick and fast. Chiquitita, Knowing Me Knowing You and Mamma Mia are such easy crowd-pleasers, drawing out mass sing-alongs and an electric atmosphere in the venue. Lay All Your Love features a spectacular rainbow light show as the ABBAtars transform into futuristic superhero performers with slick bodysuits that have neon-lit accents. Within a few tracks, ILM’s influence is felt further as ABBA are transported to a stage far far away, the rings of Saturn present in the sky of a scenic space setting. The show also features two short films by the award-winning visual arts collective Shynola, which follows a young explorer Rora as they seek out the legend of ABBA. It’s an unexpected addition to the concert, but aligns nicely with the overall Voyage narrative. And when you’ve got Voulez-Vous and Gimme! Gimme! Gimme! (A Man After Midnight) wedged into this section of electrifying inter-galactic campery, the spectacle is only heightened. However, it could quite possibly be with the recent tracks Don’t Shut Me Down and I Still Have Faith In You where the ABBAtar technology comes into its fullest effect. The staging is more simplified than elsewhere in the show, with the ABBA avatars gazing at each other emotionally as they reflect on their astounding career. Circular mesh is lowered from the arena ceiling to project the faces of each member as their digital forms take in the poignancy and power of the moment in the arena – and remarkably as the audience, you believe every second of it.

While ILM’s technology works wonders in bringing the ABBAtars into our world, an impressive 500 moving lights mapped to 30,000 points in the arena does just as good a job luring the audience into theirs. Immersive doesn’t even do it justice. It is most brilliantly displayed during a roof-raising rendition of Dancing Queen as thousands of light beads lower from the ceiling to create a rainbow ripple effect above the crowd’s heads, mimicking the digital backdrop behind ABBA themselves. It’s unlike any other light show you may have experienced before and brings even greater energy to the concert and the overall entertainment experience. ABBA Voyage is a tremendous feat of creative and technological innovation, creating a concert experience that befits one of the greatest back catalogues of hits to ever be recorded. It’s a thrilling ode to the legacy of ABBA and their remarkable impact on music in the 20th century, while also laying the groundwork for the future of live music. They’ve struck Gold once again.