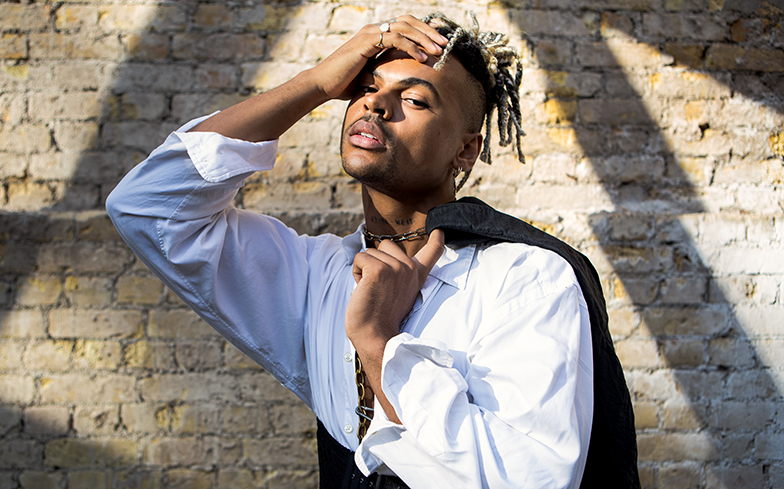 “I’m very appreciative of my sexuality – a lot of things I’ve learnt and experienced have been because I’m gay.”

The singer and dancer, who hails from East Grinstead, says he’s eager to “be a good role model for the younger generation” – and he’s doing this by entering the industry as an openly gay artist who isn’t afraid to touch base on sensitive topics such as toxic masculinity.

“I have to deal with toxic masculinity pretty daily, may it be from the men on my street or that small streak of it that’s still rooted in my own mind,” Aaron tells us. “So, many elements of it will come through in my music, talking about it is me dealing with it.”

In celebration of BOY’s release, we sat down with Aaron and got to know him a little bit. We spoke about his foray into music, his inspirations, and his struggles with the gay dating world.

How did you get into music?
Well, music got into me before I was even born. My mum and I both have a habit of playing music crazy loud. I’m pretty sure I probably came out humming Prince, Toni Braxton, or Whitney Houston. I was always singing, so when the opportunity came up for me to be in a youth musical I jumped straight at the opportunity, and from that figured out being on stage was something I’d be doing for the rest of my life. Who inspired you growing up?
My mum for sure was my biggest inspiration, she’s the reason I have this wild belief that the world will see me. The one and only rule in our house was honesty. I think as a family we can be too honest sometimes, but in writing music it’s an absolute plus. She pushed me to be proud of my differences, she’s a truly selfless human being that deserves the world.

Did you have any LGBTQ role models?
No I didn’t and I’m really eager to make sure I can be a good role model for the younger generation. Someone that stands for people just being their ‘authentic’ selves, may they be from the LGBTQ+ community or not. Its a really exciting thought to think that young kids now are more likely to have an LGBTQ+ role model in their lives.

What was your inspiration for your single BOY?
So on the day BOY was written I had plans to go out that night. Along with obviously wanting to have the best time with my friends, dance, laugh and drink, I wanted to meet a boy. I wanted to pull. But I was aware that my choice of look would make a difference to the kinda guy I’d attract. I hated that I even considered down playing what I was going to wear – I just want to be myself you know? So yeah, I guess that’s the inspiration for BOY. That night I put on a crop and a diamanté choker. Standard.

There’s hardly any openly gay queer men in music, with MNEK being an exception. Why do you think this is?
I think it’s the worry of needing to appeal to the masses. Unfortunately in society I believe that, if for example an ultra straight “masculine” man was to play one of my tracks at work, his work mates would tease him and call him gay. It’s ludicrous but I’m pretty sure it’s true. I guess artists would also worry that they need to be appealing to as many people as possible. I’m refusing to care about that. If you like it, great; if you don’t, fine.

Why was it important for you to be open about your sexuality at the start of your career?
It’s important because it’s a huge part of who I am. Years ago I would have been like, “I’m just a guy who happens to be gay” but now I’m very appreciative of my sexuality – a lot of things I’ve learnt and experienced have been because I’m gay. I love even just saying it: I’m gay!

In what way do you deal with the effects of toxic masculinity within your music?
All my music is about my life and experiences. I have to deal with toxic masculinity pretty daily, may it be from the men on my street or that small streak of it that’s still rooted in my own mind. So, many elements of it will come through in my music, talking about it is me dealing with it.

What’s your biggest hang up about the current idea of masculinity?
I’m currently hung up on the idea that men are suffering alone, not expressing and talking about how they really feel. A lot of guys only know how to go straight to anger. I’m hung up on the idea that because society has traditionally mocked men who talk about their feelings, men are taking their own lives and that is just absolutely heart breaking.

What do you like and dislike about the gay dating world?
To be honest, there are a few things that bother me within the gay dating world. One of them is the fact more and more people are starting to believe that monogamy is not a thing at all. I’m open to everything but I think losing the idea that you could just be with one person for the rest of your life is sad. But I am not at all saying an open relationship is wrong, I may give it a go! I think what I really like about the scene is that our animal physicality is much more accepted, if you get me.

In your press release, it says that your biggest grapple with being gay was “agonising over relationships you’d have to have with other men”, what were your biggest concerns?
I think just general trust issues to be honest. I was in absolutely no rush to be disappointed or hurt by another man, I think that’s probably why I didn’t come out sooner. My girls gave me enough, until enough wasn’t enough, if you know what I mean…

What’s next for Aaron Porter?
Well, this is by far only the beginning! After the release of BOY I’ll get back to focusing on the next single and get some more gigs booked in. This is my first serious release, I’m aiming high but trying to keep my head on, so not trying to look too far into the future. I just want to keep making and performing music the bulk of my time. Just be ready for some fab pop gay anthems.