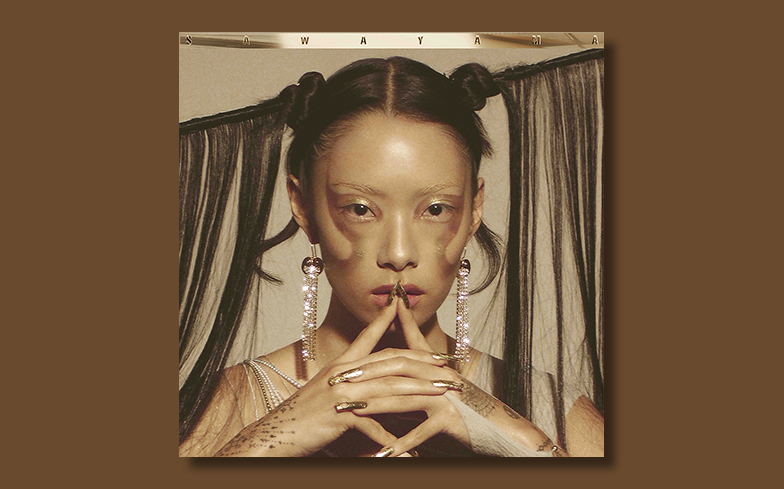 It’s been a long time coming, but Pixels, we’ve officially been SERVED.

Yes, after what feels like years of waiting, queer future-pop princess Rina Sawayama has dropped her self-titled debut album – and it’s the genre-bending, club-banging, heart-wrenching record we were hoping for.

From the nu-metal sounds of politically-charged lead single STFU! to the ‘lighters up’ country-tinged queer anthem Chosen Family, Rina continues her mission to demolish labels and expectations. It’s the most exciting debut we’ve heard in years.

See our track-by-track review of SAWAYAMA below.

Dynasty
Rina’s performance life began as part of a gospel choir in the church, and the remnants of that shine through on Sawayama’s opening track Dynasty. The song itself explores Rina’s complicated relationship with her family, and sets the tone for an album full of personal and socially conscious pop that refuses to play by the rules. It reminds us of Evanescence’s Bring Me To Life… and we mean that as a compliment.

XS
Much like her earlier material, XS is a 2000s-inspired track that takes influence from classic R&B anthems. Lyrically, however, the song is grounded in the present day, tackling issues such as capitalism and climate change. Rina explained that the track “mocks capitalism in a sinking world” and that her aim was to draw attention to how “global climate change is accelerating and human extinction is a very real possibility within our lifetime”. A bop with a message? We love to see it.

STFU!
It’s fair to say that most Rina fans were taken by surprise when STFU! dropped last year. The track is a blazing attack on racist micro-agressions, Asian stereotypes and white male privilege, and features nu-metal inspired production from longtime collaborator Clarence Clarity. It’s the biggest risk we’ve seen from a rising pop star in recent years (and this came before she’d even released a debut album), but it paid off. Five months later, and the song only gets better with each listen.

Comme Des Garçons (Like The Boys)
Was a banger, still a banger, will always be a banger. Comme Des Garçons (Like The Boys) is a pulsating club track that pays tribute to the gay men who have supported Rina through her career, and takes sonic cues from early 2000s dance tracks that “made [her] feel confident”. If you haven’t heard the Pabllo Vittar remix, make sure you check that out too.

Akasaka Sad
Rina promised her debut album would explore her identity, and that’s perhaps most prominent on Akasaka Sad, where she sings about her life growing up between Japan and the UK, and how she worries she’ll always “be sad forever and ever and ever wherever” she is in the world. Fans of Darkchild’s early 2000s production for the likes of Britney Spears, Michael Jackson and Destiny’s Child will find a lot to love here.

Paradisin’
Pixels looking for the more pop-leaning sound of past singles like Cherry and Cyber Stockholm Syndrome should turn to Paradisin’, an unrelenting sparkly bop so sugary it’ll give you toothache. Rina revisits her adolescence as she sings about drinking in Trafalgar Square and having her first kiss in 2003 while “living [her] best life”. She described the song as channeling “Ferris Bueller-vibes about my teenage rebellion against my super strict Asian mum”, which pretty much sums this one up perfectly.

Love Me 4 Me
“If you can’t love yourself, how are you gonna love somebody else?” is the rhetorical question from Rina that opens Love Me 4 Me, paraphrasing the legendary RuPaul before launching into a self-love anthem that criticises the expectations of society, and somehow manages to avoid the pitfall of becoming overly saccharine. There’s a gorgeous electric guitar during the bridge that really elevates the track.

Bad Friend
Another blast of nostalgia comes in the form of Bad Friend, an introspective mid-tempo on which Rina admits that she was the reason a good friendship ended – a perspective not often heard among pop music’s obsession with calling out others for being in the wrong. She reflects on “throwing drinks at each other” and “singing our hearts our to Carly [Rae Jepson]” before coming to the realisation, “Maybe I’m a bad friend”. It’s a definite tear-jerker for anyone who’s ever messed up a great friendship and misses the good times they once shared.

Fuck This World (Interlude)
It may be called an interlude on the album’s tracklist, but Fuck This World stands as an excellent track on its own right. It’s absolutely dreamy and would sound right at home in a fantasy video game – if Utada ever steps down from her role as the mother voice of Kingdom Hearts’ soundtracks, we hope the mantle gets passed on to Rina. There’s even some muted throwbacks to Take Me As I Am and 10-20-40 for longtime fans to appreciate.

Who’s Gonna Save U Now?
We’re 10 tracks in, and Rina’s showing no sign of slowing down yet. Who’s Gonna Save U Now? is stadium-ready pop at its finest – there’s even a virtual crowd cheering the singer’s name to really create atmosphere – and there’s more than a few echoes of Christina Aguilera’s Fighter on offer here as Rina’s voice is pushed to the limit over heavy drums and grungy guitars. Close your eyes, and you can picture her on the arena stage she’s destined for.

Tokyo Love Hotel
Rina’s often spoken about her struggle to embrace her Japanese heritage, and that comes full circle on Tokyo Love Hotel. “They don’t know you like I know you, no they don’t, use you for one night and then away they go,” she sings. It’s both a letter of love to the Japanese capital and a lamentation of the people who fetishise what the city represents without actually respecting the culture.

Chosen Family
“Where do I belong?” asks Rina at the beginning of Chosen Family. It’s the emotional centrepiece around which the whole album revolves, as Rina explores her identity as a Japanese-British pansexual woman. The answer to that question, of course, is the queer community who make up her chosen family – the people who accepted her for every part of who she is. It’s a proper ‘lighters up’ moment that we can’t wait to see Rina perform live on stage once the world goes back to normal and we can all rejoin our own chosen families.

Snakeskin
For hardcore fans, Snakeskin has been a long time coming – the track is a regular feature at her live shows, and always gets a great response from the crowd. It was worth the wait to finally hear it in glorious high quality, and is an absolute standout. What. An. Album. Closer!

Rina Sawayama’s debut album Sawayama is out Friday 17 April and will be available to stream on Apple Music.