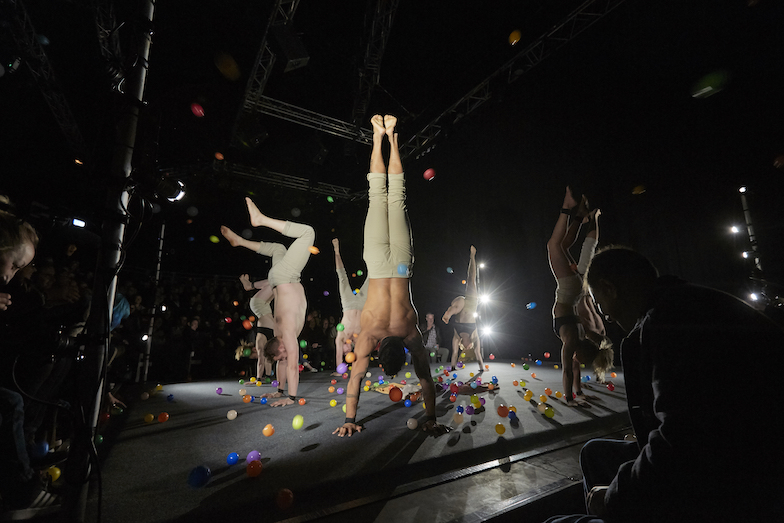 The one-hour show, presented by Australian circus troupe Gravity & Other Myths, has opened at the Underbelly Festival on London’s Southbank.

A Simple Space sees seven talented acrobats push themselves to their physical limits in a show which is primal, frantic and funny in equal measure. Accompanied by a percussionist – who has his own moment to shine – the seven take it in turns to present a variety of sketches, many of which are lighthearted and humorous, a handful of which feel genuinely dangerous.

It’s a short, sweet and straightforward show. The artists arrive in plain clothes, taking their places on a stage which is essentially just a black square with occasional props added as required. The staging and lighting is kept deliberately low-key throughout so that our focus remains on the performers and their acrobatics. The sense of intimacy really works well, and to that end we’d recommend trying to sit close to the front – although those afraid of a little audience participation may wish to avoid the first row.

Many of the scenes work well. The opening sketch plays out like a trust exercise – a performer will find a space on the stage and start falling backwards, in the hope that a colleague will catch them. There’s a playfulness to proceedings which is endearing – we sensed a real camaraderie between the seven. As the show progresses, the scenes up the ante in terms of danger – human towers are created; acrobats are used as skipping ropes; the splits is performed mid-air, one foot each on the head of two performers – themselves balanced on the shoulders of two others.

Some scenes are more entertaining than impressive. A trio of men partake in a game of strip-skipping, having to remove an item of clothing every time they trip on the rope. Another sees a competition between the seven to create a balloon animal the fastest – without looking. In one sketch, a man stands on his head – a trick which we see a lot of throughout – then proceeds to solve a Rubik’s cube.

There’s plenty here to enjoy, and yet we didn’t feel all that fulfilled by A Simple Space. Perhaps it’s lacking in depth or originality – there’s very little here we haven’t seen before, and more of the scenes felt lighthearted and playful than genuinely surprising or shocking – there were only a handful of moments of real peril, right at the show’s conclusion. There was a definite lull in the middle, too, after we’d seen a number of similar tricks performed over and over again.

None of this is to say that it’s not worth a visit – A Simple Space is a perfectly pleasant way to pass an hour at the Underbelly festival. It’s not the most creative or spectacular circus show we’ve seen, but it certainly has its moments, and it’s all delivered with a charming sense of humour.