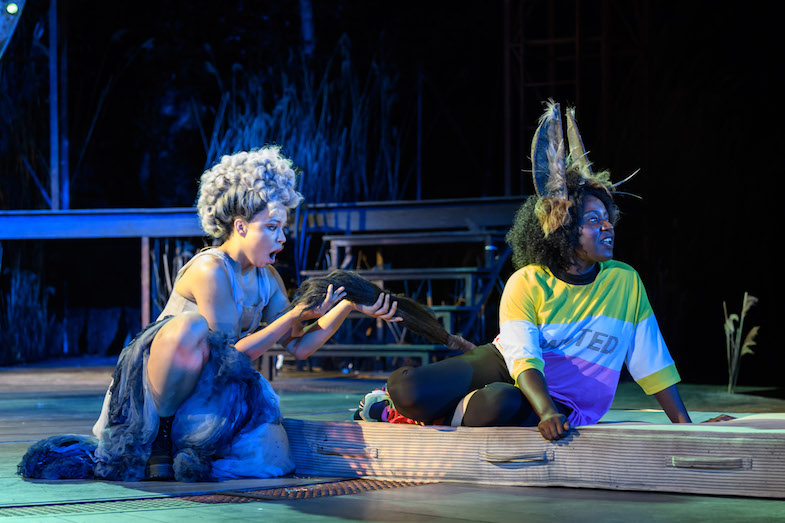 This unexpectedly sinister re-imagination of Shakespeare’s classic comedy has opened at the gorgeous Open Air Theatre in Regent’s Park, directed by Dominic Hill.

Given that there are currently two other renditions of A Midsummer Night’s Dream running in town – at the Bridge Theatre and The Globe respectively – it’s no surprise to see that this one attempts something radical to set itself apart. From the opening scene it’s immediately apparent that this is not going to be a conventional take on the text. The players enter to the sound of beatboxing; the play continues with a range of quirky gimmicks including puppetry, ventriloquism and some really quite disturbing fairies, skulking around the stage on stilts and crutches.

It all comes together to form a surprisingly cohesive package. The wooded glade of the Open Air Theatre proves to be the perfect setting for the events in the enchanted forest to unfold; the wonderful moment as the sun sets and night falls adds a further layer of magic to the events on the stage. The set is simple but effectively used, with only a handful of props – including a mattress which is put to a whole variety of amusing uses – and it works well with the modernised yet faithful script.

The cast put in an energetic performance with a number of highlights. Most of the laughs are to be found in the show’s sub-plot, with amateur troupe the Rude Mechanicals attempting to stage a version of Pyramus and Thisbe. Gareth Snook is hilarious as he tries to hold the merry band together as Quince, while Susan Wokoma is delightfully hopeless as Bottom. The eventual staging of their mini-play during Theseus and Hippolyta’s wedding is crass and crude yet highly entertaining, providing numerous laugh-out-loud funny moments towards the show’s conclusion.

The only minor issue we had was that, with so many interesting moments across the play’s various narratives, the central plot became slightly lost in the mix. In a performance which presented a cornucopia of audio and visual delights, we felt less invested in Lysander and Hermia’s story than we might have otherwise been in a more conventional staging. There were still plenty of strong moments, however, including a powerhouse performance from Remy Beasley as Helena.

We thoroughly enjoyed our evening with this wonderfully dark retelling of A Midsummer Night’s Dream. It may not get absolutely everything spot on, but it’s got a real magical quality to it, and has plenty of laughs to boot. A fine example of the power of great storytelling.