A Midsummer Night’s Dream a weird and wonderful retelling – review 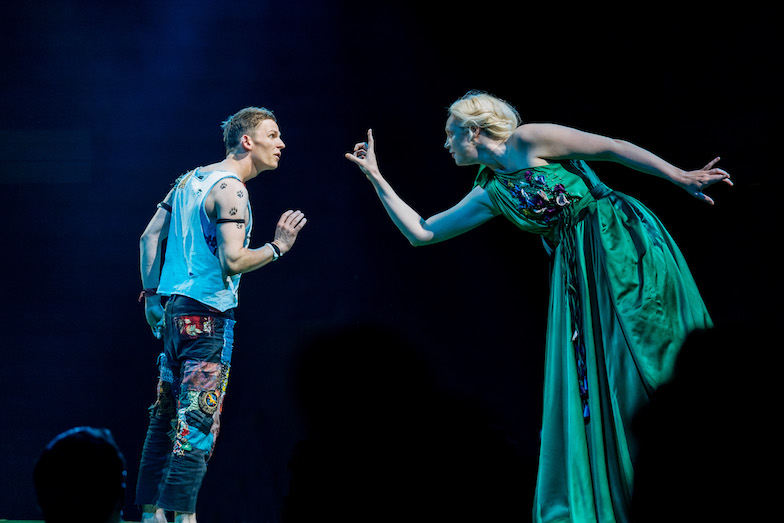 This unconventional and eccentric re-imagination of Shakespeare’s classic comedy has opened at the Bridge Theatre, directed by Nicholas Hytner.

Those seeking a radical reinterpretation of A Midsummer Night’s Dream need look no further – this new production at the wonderful Bridge Theatre is just that. It’s a visually-striking performance, full of aerial acrobatics and glistening costumes, and much of the text has been recast – leading to some interesting and unexpected exchanges between the characters. An immersive experience, it sees half the audience joining the cast as the play unfolds in the pit, with the assembled crowd taking part in the action on a number of occasions.

Game of Thrones star Gwendoline Christie takes the role of fairy queen Titania, a towering and imposing figure throughout – hers is a commanding performance, but there are many other stellar actors involved besides. Oliver Chris turns in an amusingly flamboyant Oberon, while Hammed Animashaun is utterly fabulous and endearing as Bottom. There is a talented supporting cast, too – notably Jamie Rose-Monk brings a hilarious physical comedy to proceedings and impresses with a gorgeous singing voice.

The festival-style atmosphere meant this performance was quite unlike any Shakespeare we had seen before. Initially it did feel like the play took a while to find its feet – the mixture of classic text and contemporary lines took some getting used to, as did the altered power dynamics and role reversals associated with reassigning key moments to different characters. Once we’d got our heads around what was going on we really started to enjoy it, although it took us most of the first act to get there.

Otherwise we thought this was a really great new production. Sure, purists might disagree with such an unconventional approach to the play, and even those of us open to radical change may take a while to adjust to how weird and wonderful this retelling actually is. Towards the conclusion there was an enjoyable choreographed dance routine to the tune of Dizzee Rascal’s Bonkers – and we couldn’t think of a more appropriate adjective. A Midsummer Night’s Dream is utterly bonkers – but absolutely tremendous fun, too.