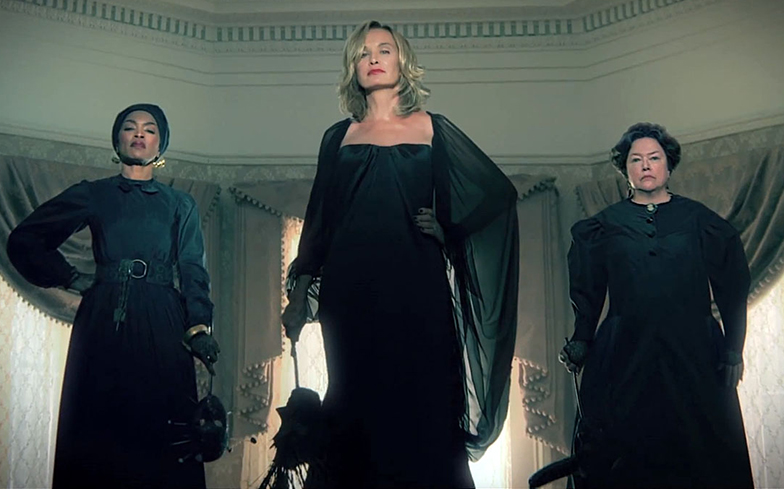 American Horror Story wouldn’t be the same without her.

During an interview with US chat show The Talk, legendary actor Kathy Bates teased fans of Ryan Murphy’s hit anthology series that she might be making a return for next year’s 10th season.

“I know he’s gonna bring some of us back,” she said.

“And Brad Falchuk, who also writes and produces that show, sent me a big bunch of roses. So, I don’t know.”

Across five seasons of American Horror Story, Kathy has played some of the show’s most memorable characters, including Ethel Darling in Freak Show, Iris in Hotel, The Butcher in Roanoke, and of course the vile Delphine LaLaurie in Coven.

So, is Kathy returning? It seems likely. In an interview with Deadline, creator Ryan said he is currently “working on an idea for season 10” that he thinks fans will love, because it’s “about reuniting fan favourite actors to come back”.

“It’s the last season we have contracted,” he said. “So, I’ve been quietly reaching out to various people. Some people I haven’t reached out to yet because I was like ‘Do I have a role for them?’ So far, everybody I reached out to said ‘Yes.’”

When asked if that means we can expect original stars Jessica Lange, Sarah Paulson and Evan Peters to make a comeback, Ryan responded: “Too soon to tell, but I’ll just sort of say, the people who helped build this show into what it is, who believed in it from the beginning, have been contacted and are interested.

“If you look at the iconography of the first three seasons, you can figure who I’ve gone to and who might be coming back. I’m always surprised, it’s such a hard show to do. Season 9 has been interesting. It’s the season that has gotten the best reviews.”

Ryan admitted that he’s really excited for the 10th season, and recognised the fan demand for the theme to be ‘aliens and space’. However, he said it would be “hard to do” because the heart of the show has always been “Americana”.

He continued: “They’ve always wanted something in space. It’s always a mysterious process of how I come up with the idea. I really don’t even understand it. I have a list of finalists on a piece of paper and I work on all of them.”

Who would you like to see return? We recently compiled a list of 12 iconic stars from American Horror Story’s nine-year history that we need to appear in some capacity for season 10. Check out the full list here.