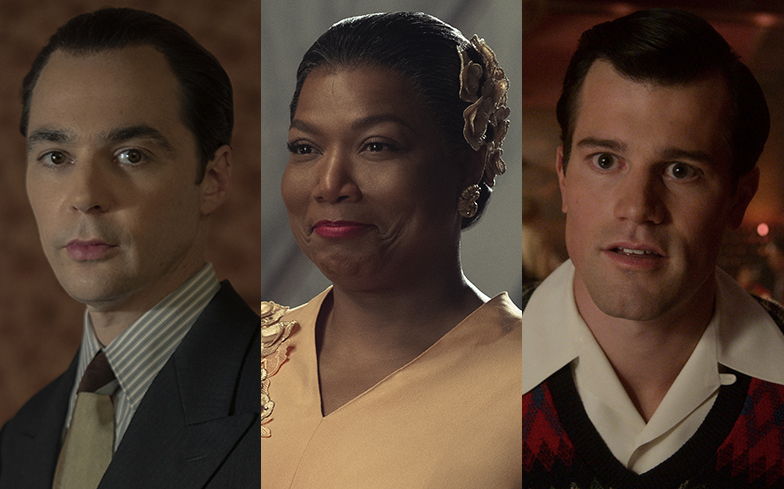 Ryan Murphy’s new Netflix series Hollywood has some real queer history behind it.

While the period drama may present a fantasy of what Hollywood’s Golden Age could have been like if LGBTQ people, women and people of colour had been given a fair chance to shine, there are a few characters based on real-life familiar faces.

Find out more about the real-life queer inspirations behind some of Hollywood’s main characters below.

Rock Hudson was one of the most popular leading men of Hollywood’s Golden Age, regularly playing the role of ‘ladies man’ in romantic films like Magnificent Obsession (1954) and Pillow Talk (1959). His screen career spanned five decades including, later on, a successful run in TV with his final role being in soap opera Dynasty. He was the first major American celebrity to die of AIDS-related complications in 1985, at which point his sexuality became public knowledge – it was well-known among those in the entertainment industry that Rock was gay, but he never spoke publicly about it due to widespread homophobia and the face that homosexuality was illegal in the United States at the time. In the early days of his career, Rock’s agent Henry Willson helped keep headlines about his sexuality out of the papers, and he even entered a cover-up marriage with Henry’s secretary Phyllis Gates. Interesting fact: For his acting debut, a small role in Fighter Squadron (1948), it took Rock 38 takes to successfully deliver his only line – a moment that’s referenced in Netflix’s Hollywood as he repeatedly struggles to land his lines while auditioning for the leading man role in the fictional movie Peg/Meg. Rock has a star on the Hollywood Walk of Fame, and following his death his Giant co-star Elizabeth Taylor purchased a bronze plaque on the West Hollywood Memorial Walk dedicated to him.

Hollywood talent manager Henry Willson was known for his roster of attractive young actors including Rock Hudson, Tab Hunter and Chad Everett, many of whom he helped propel into ‘leading man’ territory on the big screen by pushing them into the ‘beefcake’ aesthetic and teaching them how to be less effeminate. Much like his portrayal in Netflix’s Hollywood, where he’s played by Big Bang Theory star Jim Parsons, it’s been heavily reported that Henry was also known for coercing his talent into sexual favours in exchange for publicity and film roles. His most prominent client was Rock Hudson, a truck driver born Roy Scherer who Henry renamed and helped turn into one of the biggest stars of Hollywood’s Golden Age. Henry’s sexuality and questionable behaviour was reportedly well-known in the industry at the time, and it was often (rightly or wrongly) assumed that all of his clients were either gay or bisexual. In his later life, he struggled with drug addiction and alcoholism, and died penniless in 1978 where he was buried in an unmarked grave in Hollywood. A headstone reading “Star Maker” was eventually placed there.

Best known for her role as Mammy in 1939 movie Gone With The Wind, for which she became the first person of colour to win an Academy Award, Hattie McDaniel was a groundbreaking figure in the entertainment industry. As well as appearing on the big screen, she was also a TV star and recording artist, becoming the first Black woman to sing on the radio in America. In Netflix’s Hollywood, she’s portrayed by legendary singer and actress Queen Latifah, where she’s seen with both male and female lovers. Many film historians believe Hattie was bisexual, while some claim she was a member of the Sewing Circle, a secretive group of Hollywood lesbians and bisexual actresses. Despite receiving critical acclaim and an Academy Award for her role in Gone With The Wind, Hattie faced intense racism and injustice within the industry – she was banned from attending the film’s Atlanta premiere, and was made to sit at the back at the Academy Awards, away from her co-stars, as the venue had a ‘No Black People’ policy. It would be 50 years before another Black woman would win an Academy Award, when Whoopi Goldberg took home Best Supporting Actress for her role in 1990 film Ghost.

Hollywood begins streaming on Netflix on 1 May.