A definitive list of every LGBTQ character in Riverdale 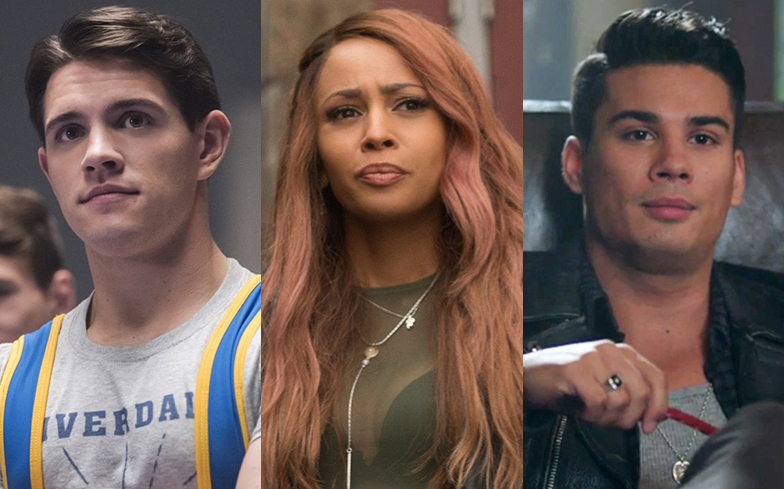 The hit American drama, based on the iconic Archie Comics characters, has garnered a large queer following over three seasons thanks to its attractive cast, copious amounts of drama, and its acceptance of gay, lesbian and bisexual characters.

We’ve compiled a list of all the queer characters the show has offered so far – we’ll update as more (hopefully) join the gang. The beloved Archie Comics Universe made history in 2010 with the introduction of Kevin Keller, a wholesome boy-next-door who happened to be the series’ first ever openly gay character. So naturally, when TV adaptation Riverdale was announced, fans expected Kevin to appear and bring his proud sexuality with him – and they haven’t been disappointed. So far, he’s had two major love interests. The first was Joaquin DeSantos, a member of the Southside Serpents gang who left him heartbroken as his involvement in a murder mystery led to him fleeing town. Since then, he’s kept himself occupied with casual encounters while cruising in the woods – an activity that’s thriving in Riverdale, it seems – but there’s always been something drawing him to Moose Mason, a closeted jock at Riverdale High School who regularly hooked up with Kevin behind his girlfriend Midge Klump’s back. Once she died a gruesome death (RIP Midge), the two began a behind-closed-doors relationship, with Kevin even joining the Riverdale Reserve Officers’ Training Corps to be closer to Moose.

We were first introduced to Moose as he was hooking up with Kevin Keller in the woods in Riverdale’s first episode, but instead of getting lucky they stumbled upon a dead body; Jason Blossom’s dead body, to be precise. Their discovery kicked off a season full of mystery and betrayal, but the pair still managed to find time to get it on every now and then. Moose was dating girlfriend Midge Klump throughout, but during the season two finale she was brutally murdered during a school production, leaving the door wide open for Kevin to provide the comforting shoulder he needed. As it currently stands, Kevin and Moose are dating, although Moose is still in the closet so we haven’t seen as much romance between the two as we’d like. Here’s hoping things improve in future seasons.

Joaquin may have been a member of Riverdale’s number one biker gang, the Southside Serpents, but that didn’t stop him from seducing the Sheriff’s son: boy-next-door hunk Kevin Keller. The two shared a number of adorable scenes that let Joaquin show off his softer side, but their time together was unfortunately limited as the gang member had to flee town due to his involvement in Jason Blossom’s murder – a plot line that formed the bulk of season one. While it was revealed that he initially latched onto Kevin in an attempt to get information from him, Joaquin appeared to develop real feelings for Kevin, and they even shared a dance at Riverdale High School’s prom. Joaquin returned as a prison inmate in season three, where he got the chance to kiss Archie Andrews, which we’ll be eternally bitter about. Yes, he stabbed him after, but he was under the influence of villainous prison overlord Warden Norton, so it’s excusable. Kinda. Initially playing the role of high school mean girl – and not much else – head cheerleader Cheryl has shown plenty of character development over three seasons of Riverdale, largely due to all the trauma she’s endured; we’re talking a twin brother murdered at the hands of their father, a failed suicide attempt, and gay ‘cure’ therapy courtesy of her mother and the Sisters of Quiet Mercy. But despite all this, she found hope in the form of Toni Topaz, a member of the Southside Serpents who helped Cheryl come to terms with her sexuality and provided love and support when her own family betrayed her. The couple have gone on to become one of the most passionately loved pairings on the show, and have been given the cute ‘ship’ name Choni. Fans originally believed Cheryl to be bisexual, but actress Madelaine Petsch later confirmed her character is a lesbian. We’re hoping they’ll be given more screen time in future episodes. One of TV’s most prominent bisexual females, Toni Topaz was introduced as a member of the Southside Serpents in Riverdale’s second season and was promoted to series regular for season three, where she became the support system that Cheryl Blossom desperately needed after her family murdered, betrayed, and attempted to put her through gay ‘cure’ therapy. In a show full of drama, Choni (that’s their ‘ship’ name) have been surprisingly stable, providing great representation for the loving and supportive relationships that queer people can (and do) have. One of the biggest mysteries on Riverdale revolved around Chic, a character who was initially believed to be Betty Cooper’s half-brother, Charles Smith, who was given up for adoption as a baby. Chic was later revealed to be an imposter, but not before causing drama for the Cooper family, including murdering a ‘shady man’ in their kitchen and attacking them with a knife. With a career in “fantasy fulfilment”, and seemingly only serving male clients, it’s hard to know if Chic exists somewhere along the sexuality spectrum or if he’s just gay-for-pay. His sexuality hasn’t been confirmed, but actor Hart Denton has previously teased that Chic “loves anything and everything, he’s all about everybody,” suggesting he may, in fact, be pansexual.

It’s never been explicitly stated, but many viewers believe Fangs to be bisexual following flirtatious scenes with resident gay teen Kevin Keller. Elsewhere, during a group visit to the cinema, Midge Klump questioned Kevin about his lack of a love life, suggesting: “What about one of those new Southside guys? I hear one of them is gay.” Kevin replied: “If it’s Fangs Fogarty, I don’t think I can date someone named Fangs.” A later plot involved Fangs hooking up with Midge in secret, so it’s not quite clear where he lies on the sexuality spectrum as of yet. There’s not much to say about this one. What’s his name? Where’s he from? What are his hopes and dreams? We’ll never know. He made a brief appearance as Kevin was cruising in the woods, but their hook-up was interrupted by gunshots. For now, our mystery man is simply credited as Jogger, and we hope he makes a comeback at some point because he is seriously cute.

Riverdale returns to US screens on 16 January and Netflix UK from 17 January.