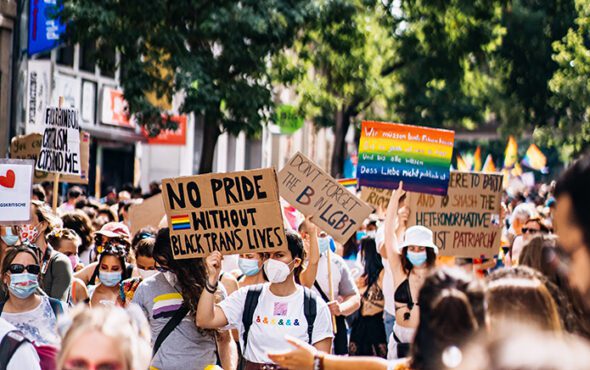 On 1 July, the UK marks 50 years since its very first Pride event took place on the streets of London.

Around 2,000 people marched down Regent’s Street in London in the name of Gay Pride on 1 July 1972. Up to 40 members of the Gay Liberation Front had organised the protest, hoping it would serve as an antidote to widespread gay shame prevalent throughout the community.

Same-sex sexual acts had only been decriminalised in England and Wales five years earlier, so the LGBTQ+ community was still dealing with the trauma they’ve suffered during the decades before.

“They were ashamed of their sexuality and gender identity so our counter to gay shame was Gay Pride,” Peter Tatchell – one of the people who organised that 1972 Pride march – recently told GAY TIMES.

Original organised to commemorate the anniversary of the 1969 Stonewall Uprising in New York City, Pride has grown into a mammoth annual LGBTQ+ event of protest and celebration.

Millions of people now line the streets of major global cities in support of LGBTQ+ rights, as activism groups call for equality and greater protections.

GAY TIMES and Channel 4 News recently conducted a survey to gauge the community’s relationship with Pride in 2022, receiving feedback from 2,237 respondents.

A huge 98% of those who took the survey agreed that Pride is still very much essential today in the UK as it was back in 1972.

When asked if Pride is an important part of the LGBTQ+ experience, 74% of respondents either strongly agreed or agreed with that sentiment. Only 8% disagreed or strongly disagreed with it.

Of those who have attended a Pride event in recent years, 74% said it was a positive experience.

However, when looking at the function of Pride in 2022, the results were much more mixed.

When asked if the entire LGBTQ+ community is represented at big city Pride celebrations, 42% strongly agreed/agreed with the statement. Just over 30% strongly disagreed/disagreed though.

We asked our audience if Pride adequately reflects the key issues facing LGBTQ+ people today. Just over 38% strongly agreed/agreed that it does, but just under 30% stated that it doesn’t.

41% of respondents strongly agreed/agreed that the act of protest is still at the core of Pride events, compared to 34% who disagreed/strongly disagreed with that statement.

As Pride celebrations have grown in scale, it has required more corporate funding to pay for the infrastructure of the events. We have seen more and more brands donate to Pride and create Pride campaigns in recent years.

We asked the GAY TIMES audience if they believed corporate money donated to Pride is directly benefiting the LGBTQ+ community.

Just under 39% of respondents were neutral on the matter, with 40% disagreeing/strong disagreeing that it does. Only 21% of people believed the money donated directly benefits the LGBTQ+ community.

It’s clear that annual Pride celebrations are still absolutely essential, but as it celebrates its 50th anniversary in the UK there is still much change that is needed.

There needs to be a renewed focus on the key issues facing the LGBTQ+ community being at the core of Pride parades across the country.

From support for our trans+ community to the banning of conversation therapy, and preventing the deportation of LGBTQ+ immigrants, there are many crucial issues that regularly get lost amongst Pride’s shiny branding and corporate messaging.

It’s also obvious that Pride events also need to become much more inclusive, creating a space that is welcoming for all LGBTQ+ people rather than being focused on and dominated by cis white gay men.

Pride is an important time to use your voice and uplift others in the community, as well as celebrating who you are and the community you belong to. These things can exist in harmony, but we must never lose focus on Pride’s origins: to fight for a world where all LGBTQ+ are liberated.